“Man has gone out to explore other worlds and other civilizations without having explored his own labyrinth of dark passages and secret chambers, and without finding what lies behind doorways that he himself has sealed.”

This exhibition of recent sculpture by David Armstrong Six, aptly titled Night School is, simply put, a tour de force. An installation made specifically for the Darling Foundry’s capacious main hall, it is more environmental installation than a grouping of discrete sculptures, although the works as individuals do stand alone. There are four groups of works presented: floor and plinth-mounted anthropomorphic works in wood; floor, wall and plinth-mounted concrete amalgams; monumental painted half cylinders; and works on paper mounted high up on one wall plane. The disposition of these sculptures in the large Foundry space is peerless, as strong and uncompromising in its own right as John Heward’s recent exhibition of paintings there.

Armstrong Six offers us a radiant cartography and one undreamt of by Anaximander. What seems at first a wild heterogeneity of materials and forms functions as a whole to map out Armstrong Six’s personal theory of sculpture and it is at one and the same time a potent critique of   prevailing syntaxes and norms. The environmental volume as a whole installed hand-in-glove in the Foundry space is so seamless a playground for Armstrong Six’s most experimental and wayward propensities that we tend to overlook the minute precision of his dovetailing and the phenomenal delicacy of his scenography.

The exhibition reminds us of Andrei Tarkovsky’s evocative nightside cinema: both his Solaris and Stalker films come to mind as we make our way through the main hall.  Armstrong Six grew up in Deloro (Spanish for ¨valley of gold¨), a modest gold mining town in southeastern Ontario. A high level of toxicity in the environment was initially revealed to be the result of arsenic (tailing ponds) which was used to separate the gold, and then it was further revealed that there had been some dubious dumping of nuclear waste into the obsolete mine shafts in the 60s by an American company- well after the mine had ceased to be operational – which made the picking of objects there subject to seizure and quarantine. There can be no doubt that the artist was marked by the desolate, radiation-scarred landscape of his youth and uses it as potent poetic template here in the same way that British writer J.G. Ballard used an island of Eniwetok, once a site for testing nuclear weapons, as the launch pad for a profound inner journey in his dystopian short story The Terminal Beach.

The picking of ruins and curious ammonite or leech-like fossils seemingly ‘unearthed’ by Armstrong Six and coated in raw concrete, the petrified fragments of signage with old Chinese characters from another epoch embedded in the material, and the hieratic wooden forms placed all about reach an ambiguous threshold where time seems to decay and different tenses inhabit the hypertrophied present tense materials like hinged terraces or deep strata. The group of anthropomorphs resembles a coterie of Ancient Greek philosophers or louche avatars overseeing a class of younger more paleolithic souls, the concrete amalgams. These wise and savvy invigilators with their clean wooden forms seem to be lecturing their ‘students’ as they follow an open circuit in the otherwise closed space.

The segmented carapace of what seems a crashed or unravelled space capsule – a far cry from the depilated one in 2001: A Space Odyssey and one more in keeping with the deteriorating starship in John Carpenter’s 1974 film Dark Star -- can perhaps be best understood as the delivery vehicle for the anthropomorphs and is strewn out in segmented array across a diagonal arc that cuts through the space. The chromatic nuances in the surface are ignited by natural light. The line of works on paper mounted high on one upper wall reads like lovely streetwise signage, the dentillation of the painted and drawn faces reinforces both the segmentation of the leeches or ammolites below and the cascading segments of the space capsule. The central theme seems to be morphosis, memory -- and immanent rites of passage.

As noted, everything in his show is minutely, even obsessively, dovetailed, and its resonances build up to critical mass before we are even aware of it. The exhibition seems to move in and out of time, a Chris Marker-like odyssey like that of La Jetée, his ingenious and prophetic 1963 French science fiction featurette. That film documented the story of a post-nuclear war experiment in time travel built from the hectic conflation of memories when, as Marker once famously said, the function of remembering is not the opposite of forgetting, but rather its lining.

Armstrong Six is a conceptual scavenger and time traveller of a sculptor sans pareil. He has employed a host of different techniques and sundry materials in order to seduce his viewers into sharing the fraught minutiae of his pressing meditation on time, memory, passage and transformation. Such is the sculptor’s prescience that it would be no exaggeration to liken him to Marker’s fated protagonist: a man who is a prisoner in the aftermath of World War III in post-apocalyptic Paris, where survivors live underground in the Palais de Chaillot galleries, and who barely escapes into time. Scientists enlist him in transreferential acts of time travel in order "to call past and future to the rescue of the present".

David Armstring Six, a visionary of a contemporary sculptor who here places his viewers in a situation that bears a certain analogy to being transported onto the jetty of Orly airport in La Jetée, would probably agree with what Chris Marker also said: “Nothing distinguishes memories from ordinary moments, only later do they make themselves known, from their scars.” WM 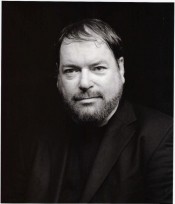