The artistic process is circuitous and enigmatic, filled with unexpected twists, hurdles and epiphanies, different for each artist, largely internal despite the concrete visual impact of the outcome. In his recent series of paintings – airy surreal abstract landscapes – Quinton Bemiller brings the process to the forefront. His underlying intention is somehow to demystify the subconscious workings behind the image, offering clarity – as suggested by the theme and title of the exhibit. “I lose myself in the painting, but I’m thinking more about what the painting will say, what people will see when they see the end product,” he said at the opening of his exhibit.

Typically, Bemiller has approached the canvas without making his process conform to a pre-determined agenda or plan. Instead, he allows his finely tuned instincts to suggest the direction of each step in the painting’s development. The act of painting is his instinctive response to the world around him. His affinity for the medium and a refined intuition for palette, and the relationships between colors, is part of his virtual DNA. Born in California, the artist began painting as a young boy, dipping into the paints of his father, a house painter. Fittingly, he refers to painting as his native language. Bemiller’s work - characterized by the dynamic interplay of vivid color in innovative combinations – exemplifies a deep curiosity, even passion, for the limitless possibilities and nuances of color, line and shape. His deep interest in color sequences and color transitions is evidenced by the facility with which he renders subtle gradations of shades and tints in a manner that is paradoxically both logical and refreshingly unpredictable. 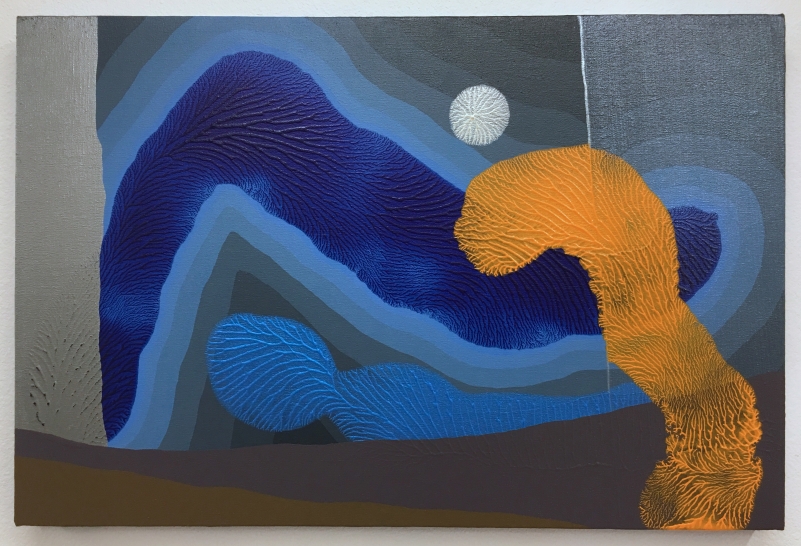 The paintings are layered and complex. The artist employs a sort of hybrid of disciplines and techniques, manufacturing his own special brand in which he links Colorfield to hard edge, teetering off the precipice of abstraction, tantalizingly close to the territory of representational imagery. On top of backgrounds composed of shapes and bands of overlapping and intersecting color, Bemiller superimposes organic forms achieved through various techniques he has perfected over time. In one such approach, pressed paint, he uses a sheet of Plexiglass as a tool to create form and texture, at times achieving a result curiously reminiscent of the pattern of brain coral. Another technique involves improvised cardboard squeegees, which Bemiller uses to drag pigment across the surface, configuring elongated shapes evoking exotic rock formations. Adding to the complexity, nuance and drama, Bemiller has developed a flair for glazing with washes of color, incorporating variations of transparency, translucency, dimension and depth to his compositions.

The work flows, conveying fluidity, capitalizing on the liquidity of acrylic paint diluted with water in different ratios for varied effect. Dominant foreground shapes and sections of background are defined and outlined with radiating bands in graduated tints, shades and tones that almost appear to vibrate. The effect lends a subtle sense of motion, mirage-like, as if areas of the painting were slightly out of focus, as in one of the smaller pieces, Magic, (Acrylic on canvas, 20 x 16 inches, 2016). In his recent work, Bemiller has eschewed the use of tape to render edge and line. As a result, his freehand painted lines, while smooth, are slightly wavy so that they almost seem to ripple, contributing to the overall magical aura and energy that radiate from his canvases. WM