Alberto Di Fabio (b. 1966, Avezzano, Italy) is an Italian artist represented by Gagosian. His paintings focus on the connection between art and science. Biological structures, genetics, synaptic receptors, pharmaceutical and medical research are the main starting point in his work.

Deianira Tolema: Alighiero Boetti first acquired your work in 1989 at a group exhibition curated by Alessandra Bonomo.  You then end up working with Boetti in Paris from 1992 to 1993. How did this come about?

Alberto Di Fabio: Alighiero bought one of my first paintings. He also encouraged me to go abroad after the Academy of Fine Arts. He said: “Here in Rome everything is very difficult. The city is static. Nothing relevant will happen unless you go away. Do you want to be just one of the many artists in Rome?” At that time he was doing something for the Cité des Arts in Paris and he invited me to join him to work together for two years.

Tolema: How did you find out about the American Abstract Art?

Di Fabio: Living in New York changed me deeply. I was obviously interested in all the artists that had been in New York before me and to the American Abstract Art in particular; I studied those paintings in the museums and it’s clear that they influenced my work.

Tolema: Your first exhibition, The Sleepless Profile of Earth, that took place in Italy in 1994, is indicative of a poetic sensibility that expresses your passion for Art and Science. Is this correct?

Di Fabio: I like doing research. I study the elements of nature and I attempt to decipher the vibration of the notes that make vibrate the Universe itself. I investigate the physical and chemical reactions, the atoms, the neuronal system by magnifying all those elements with a mental microscope. In my paintings I try to represent the principles of the Quantum Theory. It’s a mathematical process: I’m firmly convinced that discipline is necessary for the daily research of a superior being or energy (the one constantly mentioned by alchemy and religion in relation to what is known as “permutation process”). Everything is, indeed, subject to the laws of a continual transformation that tends to be harmonically connected to both Cosmos and Earth. This research goes beyond the basic physical needs like breathing, eating, sleeping; it’s a spiritual path conceived to approach the truth of the universe. Since I was a child I’ve been feeling the presence of a mysterious energy (a bridge between myself and everything that exists). Through my work I want to create a new religion meant to respect both environment and human beings and indicate that God is everywhere.

Tolema: During an exhibition at Alexandre De Folin’s, in 1998, Larry Gagosian literally fell in love with your work. Have you obtained the same success in Italy?

Di Fabio: I am lucky to work with Gagosian, it’s a very serious and professional gallery. My path remains however independent, separated from the mechanism of the art market, because of the accessible prices and also because I’m still not that famous. After every opening I have to start all over again. I’m nowhere near the objective, yet.

Talking about Larry, when I was in New York I went to his openings several times and I had the opportunity to meet extraordinary personalities like Roy Lichtenstein... whenever I was able to meet Larry in person, I invited him to see my studio, and he said: “Alberto, I can’t visit all the young artists, I don’t have time for that. When you will have the first solo exhibition in New York, I will be glad to take a look at it.”

Four or five years later I had a solo exhibition at Alexandre de Folin’s in 1998. Larry came to the opening two hours before and bought four of my paintings.

Di Fabio: Sometimes I think about the daily routine in these big cities. One of the best American neurologists claims that our neurons are five seconds late compared to the rhythm of our lives. We are overwhelmed with anxiety, ambition, dreams. It’s like a vortex that never stops rotating, unless we learn how to breathe correctly between mind and stomach, with yoga. Unless we try to feel happy about the ordinary things that we accomplish during the day or we go to an earthly Paradise like Ponza.

To answer your question, with my sister Tiziana, before she died, we wanted to open some sort of School of Athens dedicated to the philosophy of the future.

I saved money for years. My idea was to recreate a botanical garden on the island. In 2004 I planted about 400 plants around a beautiful valley that was once used by the inhabitants of the island as dump and I contacted the Ministry of Transports to suggest how to facilitate the carriage of garbage between Ponza and Latina.

Tolema: Is it true that, like many other artists, you have been influenced by the works of the great masters of the 20th century that have been on display at the National Gallery of Modern Art of Rome since 1925?

Di Fabio: Yes, when I was young I spent a lot of time at the National Gallery of Modern Art. I do know which great masters you’re talking about: Giotto, Tiziano, Sironi, De Chirico, Balla, Mondrian, Ernst. About my style, every time I paint on canvas by keeping the surface in horizontal, on a table: it’s like evoking a mantra, a prayer or even a scientific formula. The viewers are invited to dive into the signs and colors of a kinetic and sensory experience dictated by the parallel universe of human emotions.

Tolema: Meditation is fundamental, for you and your work. It is, in fact, during those moments that your mind is free from the negative contaminations of the present and is projected beyond space and time where imagination is devoid of any kind of external conditioning. How did you discover the benefits of meditation? Do you have any advice for the readers about how to meditate and how to conciliate meditation and work?

Di Fabio: First of all I do a lot of stretching. Then I focus on keeping my inner self in a state of perpetual meditation… the sensory experience is what makes us dream and feel life on different frequencies. Democritus, at the time of Ancient Greece, seemed to already perceive antimatter through the only use of his senses. Every human being has the potential to reach elevation and permutation, to acquire knowledge and revelation of the absolute dogma that we are all looking for. My works can be interpreted on different levels. My objective is to produce some sort of electromagnetism: an overlapping of waves and emotions, like Optical Art.

Tolema: Visible and invisible: what does it mean?

Di Fabio: Visible and invisible, chaos and order, relativity and quantum physics have always been part of my work. My abstract painting comes from reality, from the organic abstraction that lives in each and every one of us.

Through what I have defined as “landscape vision” I entered the “magma”. I got interested in mineral fusions, the composition of silicates, quartz, gases, the phenomena of electromagnetism. What I’m seeking is a mathematics that is yet to be decoded. After all nowadays we are only aware of 4 % of the whole universe.

Tolema: Have you ever shown your work at the CERN (European Organization for Nuclear Research)? I know it was one of your dreams when you were younger.

Di Fabio: Some of my works are very connected to the Hubble telescope and also the CERN, antimatter, the Higgs boson. Last April I presented my works at the CERN during a conference. In October, 8th an exhibition of mine (Parallel Visions) will be inaugurated in the main pavilion of the research center. My actual dream would be to expose a few works hung to wires suspended in front of a huge glass wall. That way the canvases would look like mosaics passed through the light in a pacific dialogue with the surrounding world (air, photons, the neurons of the viewers). They would as well resemble the gothic glass walls of the Middle Ages and, as such, they’d be meant to facilitate the communication between God and men, external light and inner darkness. WM 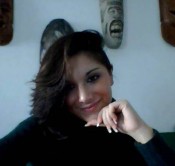 Deianira Tolema is an Italian writer based in Williamsport PA.