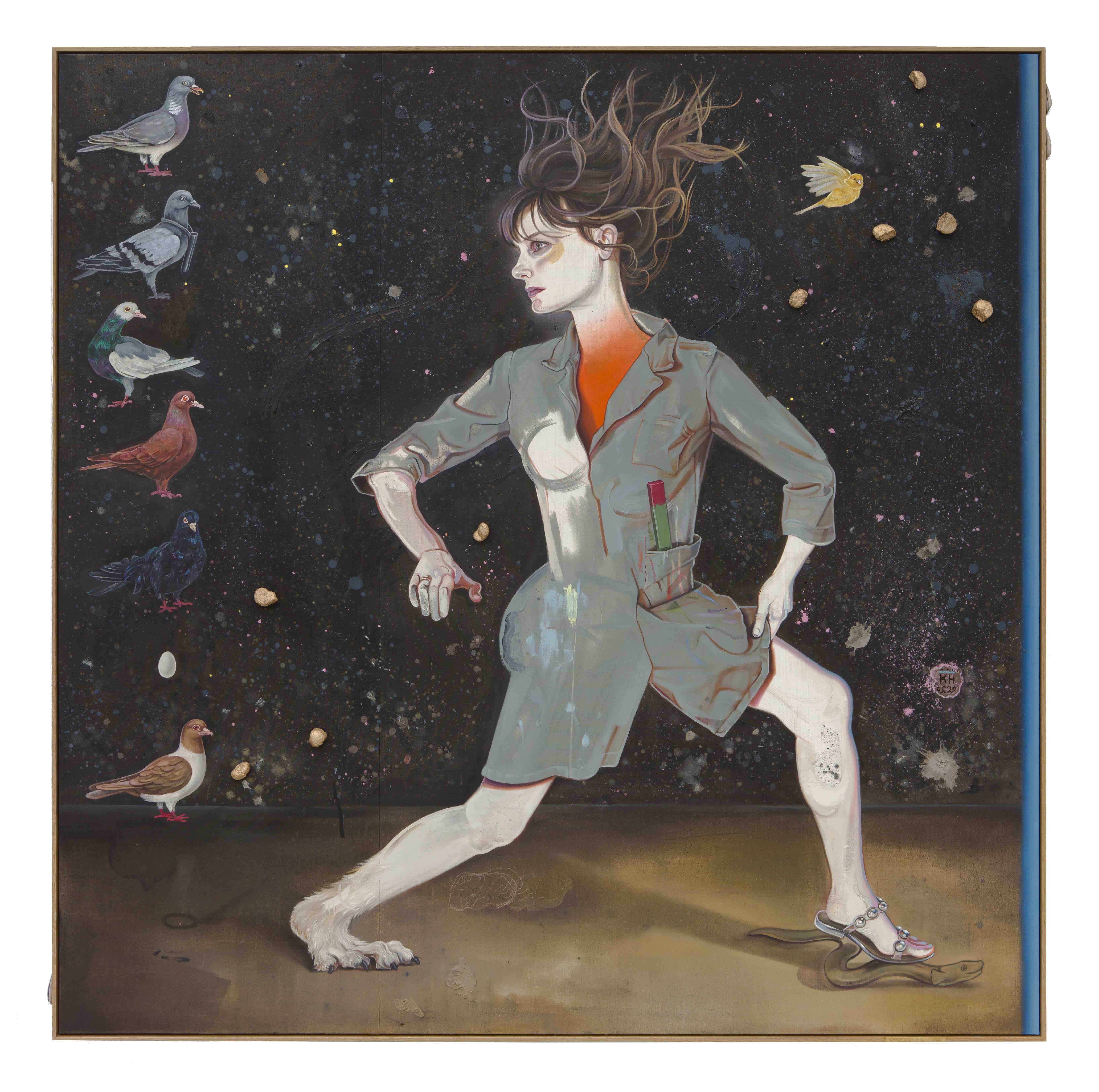 The Antwerp-based Tim Van Laere Gallery will present three new works by artist Kati Heck at this year’s online edition of Frieze New York. This exhibition will run from May 8th until May 15th, with a preview available May 6th to May 7th. Heck’s latest work builds upon the themes she’s established throughout her career, infusing them with a fresh energy. While her previous works possess an air of portraiture, her recent endeavors incorporate more action. A press release notes that with this new series, Heck “portrays people who are in the middle of accomplishing their own mission.”

Heck has achieved substantial acclaim for her command over mediums ranging from watercolor and gouache to colored pencil and oil. Regardless of the materials she’s working with, Heck renders the human subjects occupying her expansive oeuvre in incredible realism. As the press release continues, “She combines that precision with abstractions and parts that are applied almost sculpturally on canvas.” The nebulous figures scattered throughout her otherwise figurative work vary according to each painting’s tone, unified by their propensity to magnify every moment. By combining analogous elements, the press release asserts, “Her works are reminiscent of the bars, dancers and actors of Otto Dix and George Grosz, but also refer to Jean-Michel Basquiat, the Dada movement, Man Ray and the Old Masters.”

The nude female form frequently serves an elegant sandbox for Heck’s explorations. To this end, Saatchi writes that “Heck has been described as a ‘post-feminist’ because of her confrontational representation of the female body. Reminiscent of Rita Ackerman’s portraits of corrupted innocence and Franz West’s innuendo laden collages, Heck’s monumental sized paintings draw from both personal experience and popular culture, creating a heightened sense of drama or glamour from the everyday.” The most apt iterations of these principles can be found in works like Die Nachbarn II-Schnitzeljagd (2006) and Probe Eins (2015).

As Canadian Literature explains,’Post-feminist’ is a loaded term that can take pejorative or intellectual connotations according the manner with which it’s employed. In broad strokes, it embodies an evolution beyond the traditional feminist ideologies that defined the movement until the 1980s. Post-feminism seeks to move past the macro goals that feminism has historically grappled with, such as voting rights and reproductive choice, per the alleged logic that these issues have already been resolved. Whether or not resolution has in fact been realized, post-feminism seeks subtleties. It questions if feminism and respect for masculinity can coexist without tension, and seeks humanism rather than a gender-specific dogma. 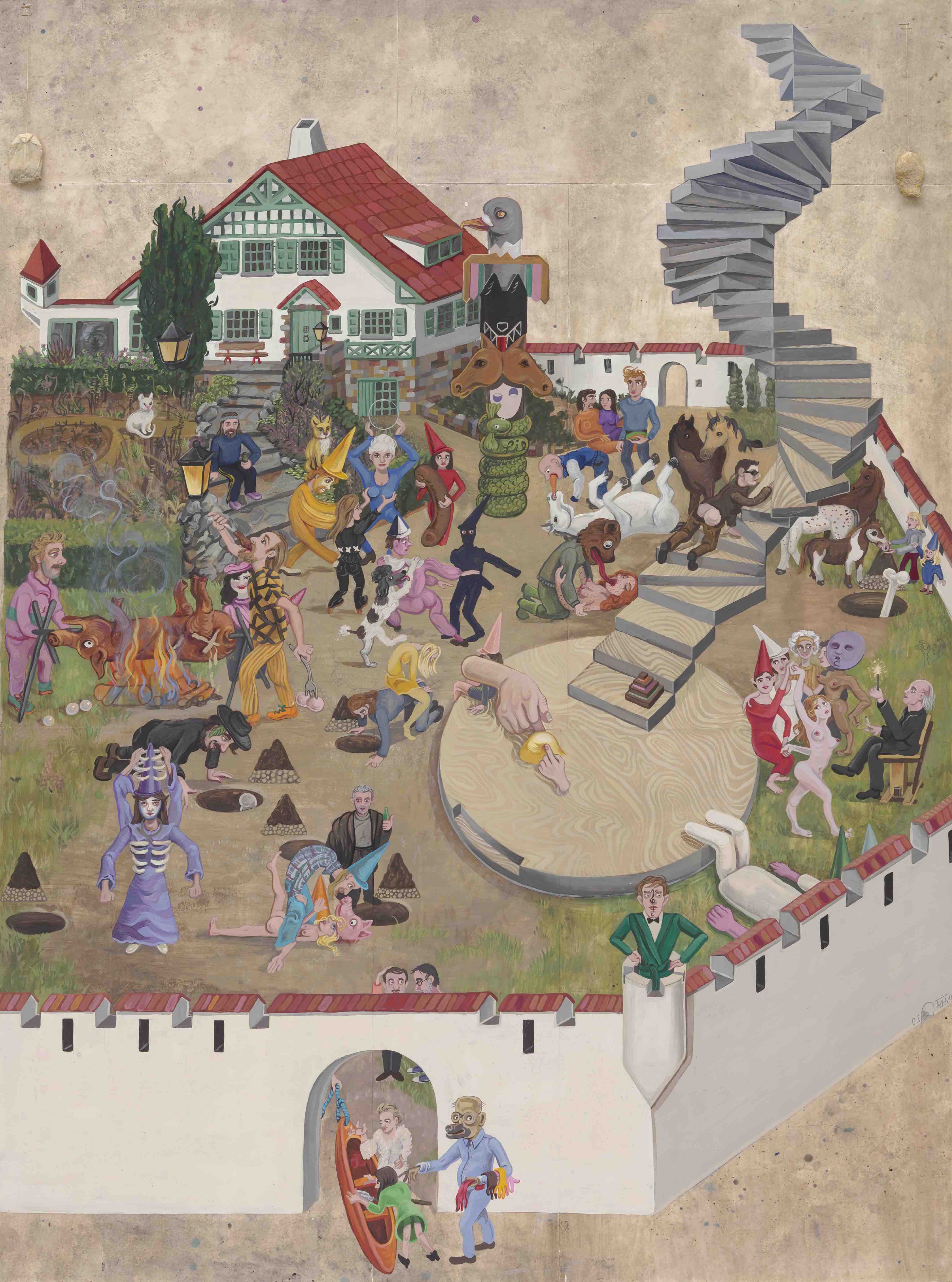 I believe this shift is necessary, and I believe that art is a crucial tool in enacting it. I do see these ideas at play in Heck’s work, which features nude women who are attractive in a societally venerated fashion. More subtly, her new work nods to post-feminist humanistic aspirations with its emphasis on action. The time for theorizing over right and wrong has passed on this front; harmonic gender relations now require a bold trudge forward.  By viewing life in binary terms (female vs. male, good vs. bad) people find themselves siphoned into rigid roles with little wiggle room for authenticity. Movement, agency, and striving unite our species. In these actions, humanity flourishes. The three works Heck will debut at Frieze thrust activity to the forefront of her artistic experimentations.

Ins Dunkel! means Into the Dark! when translated from German into English. In this self-portrait, Heck depicts herself in an extraterrestrial landscape, surrounded by space and tiny asteroids, confronting a column of birds that stands apart from the work’s airy atmosphere with their staunch organization. Twisted into a stance that highlights her body’s muscularity, Heck has also portrayed herself with one wolf leg that contrasts its human, sandal-clad counterpart. The press release states that this choice “refers to Herman Hesse's Steppenwolf and the ambiguity of our existence where our wild nature contrasts with our imposed culture and upbringing.” By freezing her body in one direction while craning her neck in the opposite, Heck manages to create a self portrait that transcends this singular moment by marrying contradictions.

The press release extrapolates this revelation by proclaiming “That fascination for ambiguity and schizophrenia is also reflected in other facets of Heck's work.” Ins Unten depicts a blond, rather idealized nude burrowing into bare earth in the shadow of a city’s skyline. Heck again substitutes one limb’s photorealism in the name of nature, imposing what appears to be a livestock hide where flesh would normally occupy. The other foot foregoes fashion for a cross section showing the biology that lies beneath its skin. Based on the trajectory of her digging, it appears she intends to go deeper. Her purpose is ambiguous. 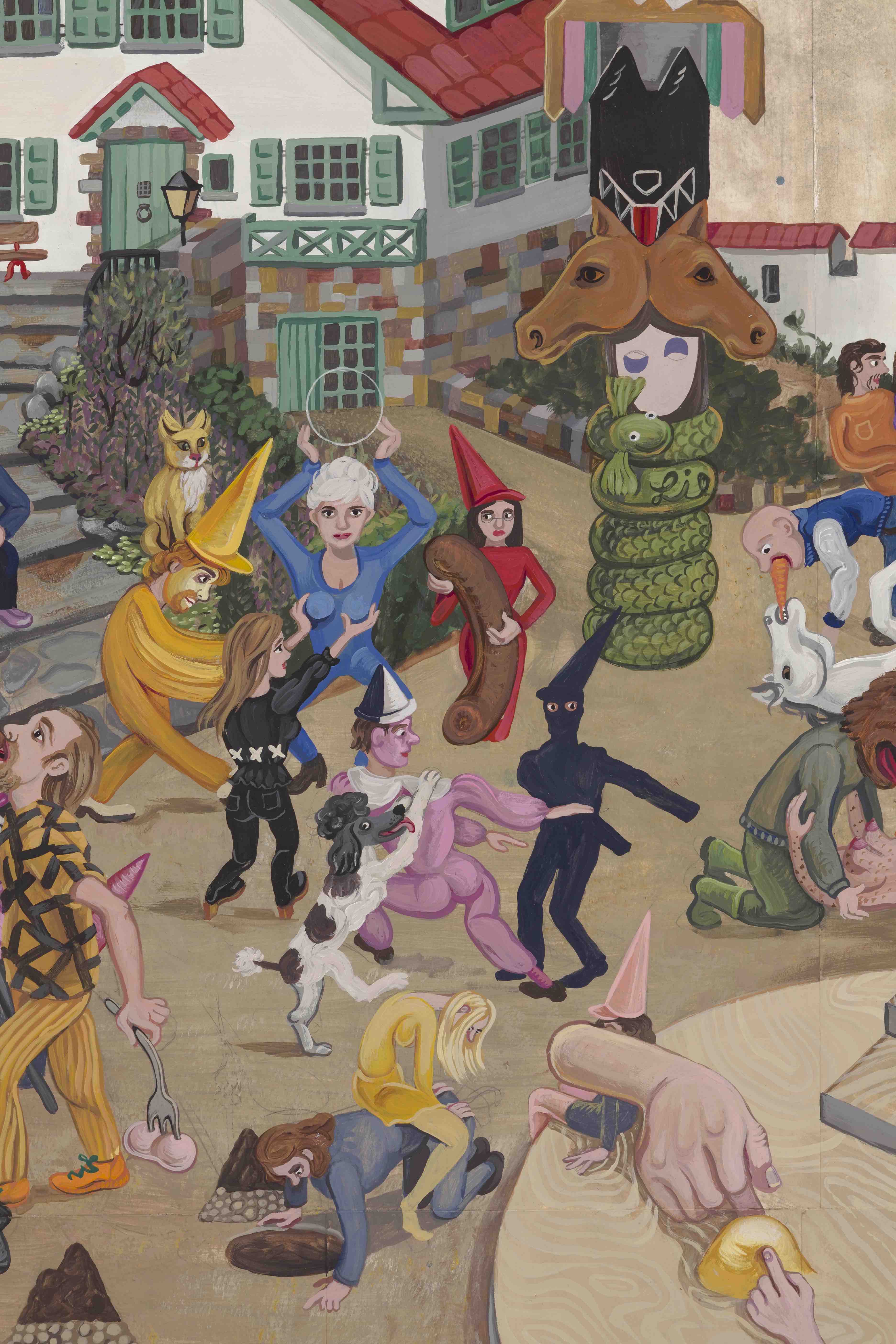 Great Piggy I stands the furthest apart from any work Heck has completed thus far. It is a frenetic landscape that speaks more to the aforementioned schizophrenia Heck dabbles in. Vaguely medieval in appearance, this complex piece feels like a genre painting, an everyday scene of some fantastical land that exists solely in the artist’s mind. Like post-feminism, genre painting seeks to understand life on its own terms, working with reality in its rawest form. Here, she abandons photorealism for illustration, sprinkling in standalone elements that lend the painting jarring optical illusions and easter eggs.

At this time where art fairs and gallery openings are migrating into the virtual space in order to survive amongst restrictions, choruses are calling for contemplation. I also agree that this general atmosphere of isolation is best utilized to understand our inner lives and greater society at this moment, to determine how we’d like to progress moving forward. However, such thinking will take place in vain if one doesn’t start on a solid foundation grounded in reality. Heck’s newest works speak to a more profound understanding of reality, examined through action snatched from the air, captured and painted for fulfilling review on Frieze’s online viewing room. WM

Vittoria Benzine is a street art journalist and personal essayist based in Brooklyn, New York. Her affinity for counterculture and questioning has introduced her to exceptional artists and morally ambiguous characters alike. She values writing as a method of processing the world’s complexity. Send love letters to her via: @vittoriabenzine // vittoriabenzine@gmail.com // vittoriabenzine.com