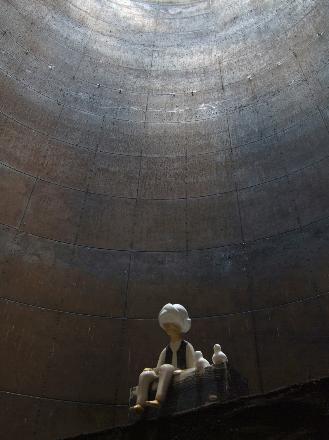 Art Omi International Artists’ Residency: A Space to Create and To Share

For over 10 years Art Omi has been hosting residencies for writers, artists, musicians and dancers. In the near future a residency for architects will be established. This past summer, the open day for artists featured a range of work that was of a high caliber and inspiring. Thirty-one artists from 19 countries (including for the first time Armenia, Bolivia and Thailand) spent a little over three weeks in the bucolic hamlet of Omi, near Ghent and Chatham, in upstate New York. At the end of the residency, the open day offered visitors a chance to view, and buy, the art work that was conceived, begun, and/or completed during the residency.

Jiradej Meemalai, from Thailand, created a body of work that reflected not only his experience of Art Omi (a visual diary) but also that of the viewer who was allowed, during the Open Studio, to write their dreams/wishes, and place them as part of one of his installations. In addition, Jiradej made graphite and charcoal drawings which combined figurative elements with abstraction. There was also a minimalist Chair, 2008, and steel and wood sculpture which, next to Jiradej’s beautiful wife, Pornpilai, looked especially stark. Jiradej often works with his wife and together they have created the epitome of the artistic balance of male and female energies in their work.

Three American artists stood out for me. The work of one of them, Mary Ann Strandell, I’ve seen many times before in exhibitions and at art fairs. Her work at Omi showed a refining of methods and imagery which she has been using in her painting and lenticular works for the last few years. Monkey Light, 2008, and Weir, 2008, are paintings which feature the chandelier, monkey and figurine motifs for which Strandell is known. Spatial depth, layering of imagery and color are all concerns of this artist’s work.

Seth Chwast, USA, was new to me, though he is well known in some art circles. He is autistic and what might be called a naïve artist. From the age of 20, after taking a painting class at the Cleveland Museum of Art, he has painted relentlessly, with his art bringing him to the attention of millions through appearances on such television shows as NBC’s Good Morning America. Seth paints in bright happy colors. He paints animals and cityscapes and portraits, with geometric, sometimes abstract backgrounds. Seth rarely speaks but through his work he says a lot about man’s relationship to the world around him.

Xaviera Simmons, also from the USA, did a lot of performance and photography work at Omi, but she also presented at the Open Studio an installation of black boards hanging one after the other, written on with white chalk. Words relating to each other told a story in conjunction with the words on other blackboards. This amalgamation of words brought to mind strong visual images which the words described.

Ivars Drulle, from Latvia, did an installation in the silo which included sound and sculpture. A turbaned man sitting with his head propped on his hand and a bird next to him seems to be listening to the radio report of a football game during the Euro Cup. The contrast of the small still character and the echoing sound in the big silo worked fantastically as a study in subtle art magic. Ivars work spans small and massive sculpture, sound art, storytelling and painting.

Barnabas Ndudzo, from Botswana, on the other hand, did a monumental sculpture in wood. The sculpture of a young boy grew bit by bit everyday as Ndudzo chiseled away with his tools under a tent in the warm summer air. Ndudzo was probably the oldest artist in the residency and his quiet charm and wisdom mirrored perfectly the age old art he was creating with his hands.

Arshak Sarkissian’s oil paintings resonated with an allegorical and historical strength which could only come from plumbing the depths of his Armenian heritage and world culture. He drew and painted during his residency. His colorful, though not brightly colored paintings, often showed a range of characters with various wide-eyed expressions. Birds sometimes crowd the canvas and through the visible brushstrokes take on an almost preternatural life.

Overall, the quality of work seemed superior to other years when I visited the residency, and in fact, as the Founder of Art Omi Francis Greenberger, proudly pointed out, a certain artist from a past residency often sells for millions at the post war and contemporary auctions. This should give some idea as to the potential value of the work being fostered at Art Omi.

The new Director of Art Omi, Claudia Cannizzaro, seems up to the challenge of this residency. She has a long history on both the artistic and administrative side of the art world. She is a practicing artist who was recently the Director of Apexart. She currently shares her time between a studio in New York City, the Art Omi residency, and the Rome Prize Fellowships Program at the American Academy in Rome. 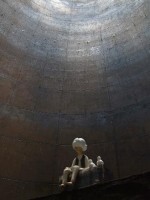 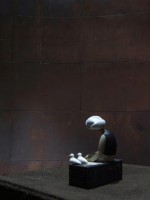 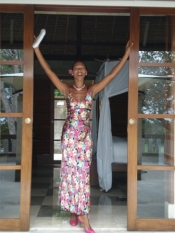