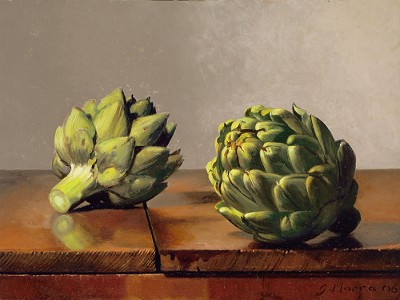 In Mertz No. 10, an oil painting on canvas (36 x 24 in.) John Morra becomes aware of the immediacy of art. Up until then, his grasp of leading the world’s regional artists had not become integrated into this quotient. After all, it was only this month that iconic fashion designer, Marc Jacobs began to sell t-shirts which were to raise contributions for the Provincetown Art Association.

Maine were seen as too provincial up until now. Venues for Morra who was born in

Meridian, Mississippi , in 1962 and raised in

Southern California were limited to powerful monopolies who only wanted theatrical installations for tax shelters. Our regional artists were trampled in the commotion of an art scene dictated to by big business.

Brandywine Tomatoes, (9 x 15 in.) Morra signals through the droplets of water glistening on their skin that artists have been testing the waters of the marketplace and were oppressed by these big galleries.

Historically, Robert Henri’s circle, often called the “Ashcan painters” would create a new art form with great strength and vitality. Tonalism, exalted Innes’ emotional bond with his subject. Impressionistic Realism gave forth to crystalline images that captured the American’s imagination even more than the French Impressionists. Americans may have been stricter naturalists.

Monet’s style varies from Chase, Twactman and other American Impressionists. Impressionism aimed at creating an original style of painting which went into a different direction than an artist like Vermeer.

California Tonalists such as Rollo Peters (1862-1928) were fascinated with twilight scenes. Fog, moonlit nocturnes were the spiritual key to their paintings. Pale light from the moon was very popular at the turn of the last century.

School of Painting, still lives combining both natural and artificial light were also not intended to reproduce a likeness of the subject, but to make a statement, to express an idea or emotion about the subject.

On the other hand, the highest elite, the Masters Degree students from such institutions as the New York Academy of Art Graduate School for Figurative Art are a part of a slightly different group. In Green Mixers, oil on canvas (22 x 30 in.) Morra focuses instead on painstakingly achieving 3-dimensional compositions using light and color. He has studied the methods of the artists of the past and tend to follow the strict traditions of figurative painting.

We, who love the allure of the old school, sigh nostalgically at the smell of oil paint and gum turpentine. In Artichokes, oil on panel, (9 x 12 in.)we are reminded about the craft of painting. I am amazed at John Morra’s purity of purpose during this moment in history. In the midst of being bombarded by what is perceived as fashionable in the art world, he maintains his balance.

Claudia Schwalb graduated from Pratt Institute in 1974.  She was an emerging artist during the Minimalist movement in the 1970's.  She was raised in New York City during the Abstract Expressionist era. Claudia was the youngest artist ever to have a solo exhibition at The Clocktower/P.S.1 in 1977.  Claudia went on to write for Barbara Rose's Journal of Art and was one of the Contributing Editors of Cover/Arts New York along with John Yau and Judd Tully (Editor-at-Large for Arts & Auction).  She was Curator of the Knitting Factory and a television news transcriber for Peter Jennings' World News Tonight.  Subsequently, Claudia transcribed two movies, "Refuge" and "Interview with the Dalai Lama" which played at the Quad last year.  claudschwa@aol.com