What defines a project space? Is it space that ideally facilitates a possibility for an artist to experiment? Is it a space that pushes artists to create a new set of parameters for the execution of their work? Or is it a space that simply shouts that it's time to role up the sleeves and get down and dirty? For Locust Projects—one of Miami’s leading projects spaces—the answer is all of the above.

Founded in 1998 by COOPER, Westen Charles and Elizabeth Withstandley—three artists who were looking for a space to make and exhibit work that they felt was not being facilitated by the community at the time—Locust Project’s humble beginnings set a precedent that many artists today rely upon for development. At the genesis of what is now one of Miami’s hottest alternative galleries, all three of the founders actually lived and worked in the space and began simply by showing their own work and the work of their friends. With the exception of Dorsch Gallery, Locust Projects was the first to arrive in what is now known as the Wynwood Art District. Ten years later the area is currently home to around 40 galleries, but at the time of Locust’s inception cultural venues were sparse and the imposing grid of grey storage warehouses and dark, deserted streets far from the vivacity of Miami Beach was not the kind of area that anyone would want to visit.
In the year 2000 Dennis Scholl came on as Locust Projects’ first Chair Person and pulled together a board of Directors; the space became incorporated and acquired its current not-for-profit status allowing it to apply for the funding that assisted in the scheduling of a more diversified program. Up until two years ago co-founder Westen Charles ran the space together with an assistant—co-founders COOPER and Elizabeth Withstandly left some years previous; COOPER to New Mexico and Withstandly to LA, though all maintain strong ties to Miami. Locust Projects’ current Director, Claire Breukel, was hired in 2006 as the spaces’ first official staff member and was soon joined by Susan Lee Chun who fulfilled the role of Assistant Director. The advent of Breukel and Chun meant not only the beginning of regular opening hours but also the augmentation of the space as a professional venue for the experimentation, development and ultimately exhibition of cutting edge contemporary art.
Installation view of Diego Bianchi, an exhibition by the artist of the same name.
In a recent interview with Claire Breukel, Locust Projects’ operations together with the individual constituents of the spaces success including the importance of a prescient local contingent were explored:
Thomas Hollingworth: Locust Projects as a non-profit exhibition space has survived in Miami where other similar spaces (such as the Moore Space) have not. What do you think is the main reason for this?
Claire Breukel: Despite running the risk of cutting my own head off I want to be completely open about this. I think it is because Locust has maintained that it isn’t run by one specific person or one specific collector; it’s really a group effort. Financially we are supported mostly by grants and our annual fundraising events which means that there is not one person that overshadows the space, so its not personality driven which has really allowed us to be flexible and really keep true to the mission without being steered off in any other directions. I think that above all has really maintained our identity in the fact that we are able to sustain ourselves. In a similar vein, our budget is really small which has allowed us to do things in a much safer manner than a lot of the other spaces. The Moore Space was a great venue with an amazing track record and it was a real shame for Miami that it decided to close.
Installation view of DREAM-CUM-TRU, an exhibition by Clifton Childree

CB: I think my biggest personal goal is to be able to get the infrastructure of the space to a point where we are able to select any artist to come down and have fun and free rein. At the moment we are restricted by both space and funding. I would love to get us to the point where the back of house is so tight that an artist can come and have a really great experience. And its not only about the show, its about the kind of experience that we provide in Miami itself. That goes for both the artists here and artists coming to visit. So I would love to schedule more programming that is actually about the experience not just the end result which is the show. And hopefully by providing a great experience, the end result becomes improved as well.

Ivan Reyes Garcia’s De-enchantment of the Balzak Boy from the current 10 year anniversary exhibition.
Assistant Director, Susan Lee Chun adds: When Wes, COOPER, and Elizabeth came together their impetus was to fulfill the need of a space that would have artists create work that not only challenged themselves, but also the community and how they engaged with art. Ten years later, much of the love in the community comes from the history of involvement and participation of the local artists- drawing in crowds and creating an energy and presence here that still exists today. For many of the local artists, having been involved in Locust Projects' growth, gives a sense of ownership and attachment to the organization that keeps us going.

Chris Beuning’s Untitled from the current 10 year anniversary exhibition.
Unlike many ‘project spaces’ or ‘project rooms’ that exist as profit generating annexes to larger galleries, Museums and even artist studios, Locust Projects is an entity all to its own, with no figure head, protected from the distracting grind of the art market economy by a ever thickening, conjoined protective layer of local solidarity.
Miami, home to a growing number of international galleries is kind of an annex itself. A place that the heavy hitting dealers of Europe and New York come to test their weaponry; and for artists, a wonderful springboard from which they can fall a few times without anyone noticing before the very intimacy which protects their fledgling blunders from the eyes of the wider world thrusts them and their reputations on to the world stage.
This unique confluence of eagerness facilitating importance and what appears to be a locale with a genuinely high concentration of talent is however not always a conducive atmosphere for success. For while artists may find that those that support them are not only accessible, but in this small pond rather powerful, it seems that those who help make careers oftentimes fail to recognize the potentially stunting effect that their attention can have on an artist’s development. All too ready to make sure that their mark is the one that finally asserts Miami as a culturally important city, many a hand of a local collector, dealer, director/curator or even writer is scorched by the flame of an artist who burned up too quickly; their output forced into an unnatural imbalance with their relative experiential input and the all important measured guidance of old father time.
Thankfully places like Locust Projects prove that contrary to the arcane suppositions that the art world and its minions have artists literally dying to understand, there are other, perhaps better and ultimately more rewarding ways of approaching art making.
As long as there is an art community in Miami who value the freedom to be expressive, Locust Projects is assured to prosper; in doing so it will always be among the few spaces in this rapidly developing city that place the importance of space to think above space to sell. Having matured through a variety of incantations the space has always remained true to one guiding principle—that of play. That the spirit of artistic expression should at all costs always have a refuge, somewhere that artists, unencumbered by notions of value or pressures from outside influences can spend valuable time and energy nurturing the very creativity that the art world can ironically stifle. 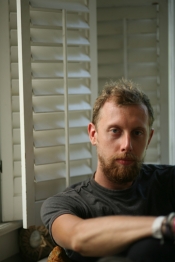 
Thomas Hollingworth graduated with a BFA from London Guildhall University in 2003. He has since worked internationally as a freelance writer for art institutions such as The Margulies Collection at the Warehouse and Galerie Emmanuel Perrotin and publications such as Florida InsideOut, M/The New York Art World, map magazine, Miami Modern Luxury, NO MAD Paper, Whitehot Magazine of Contemporary Art, Wynwood - The Art Magazine, and ARTLURKER, an online contemporary art newsletter/blog that he runs. www.artlurker.com