The Catholic King of Pop Art: Praying with Andy at Brooklyn Museum

It surprised me to learn of Andy Warhol worshipping anything but pop culture. How could the Warhol of Factory fame believe in God? The ancient repetition inherent to religious traditions—like kneeling to pray and the singing of hymns—feels strange in relation to his experimental works. At Andy Warhol: Revelation at the Brooklyn Museum, icons of Catholicism blend with those of capitalist consumption in a whirlpool of worship; the figures of religious spirit become one with those of American consumerism.

In Raphael Madonna-$6.99, the Virgin Mary holds baby Jesus, her blue robe only partially filled. Flanked by saints, her image is printed on the bottom of the canvas, as if she is stepping on her own reflection. The yellow text “6.99” glistens on a red price tag. The holy figures and the secular tag clash. The figures are simplified into lines, barring any color except for the simple blue, pink, red, and yellow. Are the figures still holy when they are so easily reproduced? Are they still holy when priced at $6.99? Perhaps they are even holier once they are commodified for distribution.

The first section of the exhibition sets the scene of Andrew Warhola’s youth (a copy editor at Glamour Magazine dropped the “A” by accident, and Warhola became Warhol) via various childhood ephemera. He was a practicing Catholic with immigrant parents. His certification of baptism and confirmation, a prayer card with St. Jude plastered on the front, and wooden crucifixes provide the weight and nostalgia of household relics. Delicate drawings of cats and angels made by his mother, Julia, hang tightly together.

In Are You “Different”?, a print inspired by newspaper ads, a star on the figure's forehead emits light beams like the halo that Christ and the saints are often portrayed wearing, signaling their divine status. There is tension between the figure’s divinity and the question, “are you different?” The figure is pensive with their hand to their chin—they do not have the answers. The black and white advert format is decidedly philosophical and spiritual; instead of an item being sold, an open-ended question is presented that we must engage with.

Warhol’s images come and go in varying states of being. Marilyn Monroe is printed with 8 mouths, under an “X”, and then fading away. His lexicon of American symbols signal a culture of reproduction (Marilyn, Jackie Kennedy in all those shades of blue, Campbell’s tomato soup, etc.), not only in form—as Warhol utilizes repetitive printed images in different colors—but also as pieces made to be worshipped over and over again. The appropriation of images transcends period: God has been commodified for a very long time. Like the tactics of commercial branding, the saints were and are reproduced and spread to levels of recognition — regardless of widespread recognition, the saints exist within intimate spaces, such as the home and the church. Brands like Campbell's exist in the home, too, regardless of their universally recognized logo.  Both Warhol and the Catholic Church have an approachable lexicon of images that are old and new, and both require simultaneous privacy and publicity to grasp.

Warhol has become something of a Jesus-figure himself, his face plastered on t-shirts and stickers, a household name with his own crown of thorns. He frequented three Catholic churches in NYC, and had a Catholic funeral. Raphael Madonna-$6.99 was printed on his funeral announcement card, and once the priest had sprinkled holy water on his coffin, a copy of Interview magazine was placed inside, along with his favorite perfume. What if someone can be both earnest and superficial, traditional and new, holy and damned, queer and Catholic? Revelation challenges us to address tensions, not only in Warhol, but in ourselves. No matter how much the exhibition maps his spirituality, it leaves us with more questions than answers. There are parts of him that evade knowing, and perhaps that is the revelation; Warhol wasn’t completely commodifiable, even until the end. Are we different?  WM 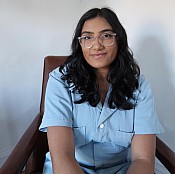 Priya Gandhi is a writer located in New York City. She has held positions at Creative Time and the Smart Museum of Art, and has been published in Hyperallergic and MODA Magazine.