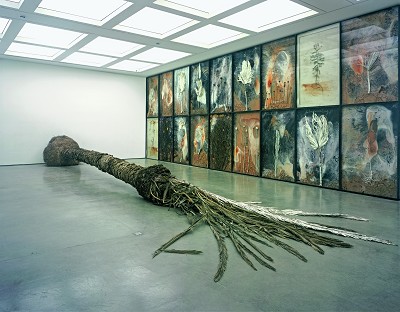 In characteristic style, Anselm Kiefer thunders into 2007 with a triumphant new body of work exhibited concurrently at White Cube Mason's Yard and the Royal Academy of Arts in London.

Kiefer's practice has never been one to court shrinking wallflowers, and this is a point vehemently imparted at first point of contact with the work at White Cube.

The upper gallery space is abruptly dissected by an immense dessicated palm tree which, together with a series of eighteen paintings occupying an adjacent wall, comprises the installation 'Palmsonntag', ('Palm Sunday'). The relationship that the viewer experiences with this work aptly mirrors the significance of this day in Biblical history, that marked the beginning of the spiral of events ending in Christ's death. For whilst on one hand, the viewer yearns to establish physical contact with the densely textured surfaces of the palm and paintings, their discernably abrasive tactility threatens pain and discomfort. Thus the unescapable truth is echoed: the tangled relationship between pleasure and pain is ever-present and inextricably interlinked, just as Christ endured the ultimate sacrifice for the salvation of mankind. One must traverse the length of the upper gallery to proceed beyond the palm, forcing contemplation of its symbolic significance of suffering and eventual redemption.

Â  The paintings, composed of both paint and natural materials, are uniformly encased in glass-fronted box frames. Routinely arranged and tightly juxtaposed from floor to ceiling, they stand in sharp contrast to the defiant spatial dominance of the palm. Within each frame however, chaos reigns supreme. Chromatic explosions are thickly splattered amongst natural materials, in a vividly graphic illustration of the exhibition title, 'Aperiatur terra' ('Let the earth be opened'), a quotation from the Book of Isaiah.

In the lower gallery, a trio of richly impastoed landscapes cite no specific narrative, but each bear verbal allusions to historical, literary and religious precedent. Rolling swathes of paint, violently dashed onto the canvas, create monumental panoramas. Intermitent daubs of pigment create an impression of eternally toiling anonymous masses, set against parched fields, a time-honoured motif favoured by Kiefer's fellow Germanic artistic predecessors, such as Kathe Kollwitz. Yet these images retain ambiguity and one could view certain brightly coloured elements as suggestive of life-forms springing from barren earth, recalling themes of cyclical regeneration which recur in Kiefer's practice. This is also suggested by the sweeping linear marks which are simultaneously sucked towards, and spewed forth, from a vortex-like vanishing point, echoing perpetual death and rebirth.

Accompanying the main exhibition is an installation entitled 'Jericho', sited in the courtyard of the Royal Academy of Arts. A pair of towers are formed from rudely-hewn concrete chambers, mounted atop each other. By dint of their heavily-worn appearance, the shells speak of history one is denied exact recourse to, and can only imagine. Stepping within, the viewer's role is transformed to that of participant and through broken holes, can gaze directly to the skies, transported to a meditative space to glean minutiae of shattered memories.

The brooding intensity weightily expressed from these works, is typical is Kiefer's practice, which is so often redolent of the weight of German historical conscience. Yet the very idea which lies at the theological foundation of this exhibition promises hope. For, symbolised by the day which marked Christ's sacrifice for mankind, Anselm Kiefer's work reminds one that, despite the inevitability of suffering and pain that shall be endured through life, hope can and shall spring eternal.

Rukhsana Jahangir is a journalist in London
rukhsana.jahangir@googlemail.com