For the most part, projects and endeavors when they first take off are pretty nerve-racking. Was this really a good idea? I’ve been hosting art exhibitions and events for 20 years, and still feel like a freshman in high school wondering if the upper classmen, cool people, fun people, smart people, or anyone will show up. For me, that feeling never goes away. Why should it?

This summer I embarked on a curated art exhibition with my talented, multi-faceted colleague Kelcey Edwards, who runs Iron Gate East in the Hamptons (an homage to her original art gallery and incubator Iron Gate Studios in Austin). Since then, we had a good run, are very thankful to those who did show up, and are now ready to send this one out to sea with full sails.

But before that happens, we’ve got an experiment on our hands. The Hamptons International Film Festival gave us inspiration to conduct our own little screening, and Kelcey tapped her old friend, filmmaker Matthew Kohn who has been running Speakeasy Cinema in NYC since 2006.

To help explain, I plucked this manifesto from MATTKOHN.NET:

What to expect at Speakeasy Cinema:

1) My guest brings a film. Only we know what it is until the lights dim, and the screen is lit.
2) The guest’s choice can’t be a film the guest has worked on: only a film they love or hate, think is important, inspiring and want to talk about. It’s useless to guess what film my guests will bring and don’t ask me - I have never told!
3) After the film, I interview my guest about why they brought the film. Then everyone in the audience shares their insights into the film. We talk about ART. Industry talk is verboten!
5) Bring a bottle – we provide the corkscrew


In a recent interview, Matthew writes:

"It started because I was asked to create a film series at a theater called Collective: Unconscious. C:U was an incubator for projects like a serial science fiction satirical soap opera called Manifestations, as well a Tony Award winning play that became a highly regarded 3D feature film, Charlie Victor Romeo.

I wanted to use these evenings to hear from other interesting people. What do they think I'm missing and what they would like to share? Most of my filmmaker friends aren't necessarily teachers or lecturers or being asked about their oeuvre except, perhaps, in print.  A few have had retrospectives, but even then, this kind of sharing is not common. For one night they have a chance for them to tell a story that connects what they do now to cinema history, or perhaps to a film that has rarely been seen. Whatever they want."

And who is our guest presenter, might you ask? Meet Grace Rex, actress and writer, known for roles ranging from The Secret Life of Walter Mitty to The Good Wife. Her IMDb credits are too many to list but it says that she is 5’6” and I’m going to check that.

Grace and I chatted recently, she described some past projects, like a short film titled This is She: a grieving woman who plays a game with a mysterious spot on the walls of her new apartment. Another, Be Good, is about a couple who learns secrets about one another after rescuing a dog. Then, she just finished an experimental short called Others, which is a bunch of vignettes involving people in quiet everyday moments who are each connected by an umbilical-like cord to a kind of childlike, unruly being. I’ll discover more about her as the evening progresses.

Do you trust Grace with two hours of your Saturday night? I do – but it’s not because I am the co-host, but because I am genuinely curious to see how this plays out.

Or see if anyone will come.

WHY: On the occasion of closing night of the art exhibition a rose is a rose is a rose, curated by Kelcey Edwards and Yours Truly. Participating artists: Sydney Albertini, Rachel Garrard, Terra Goolsby, Talia Levitt, Nicole Nadeau, Jo Shane. 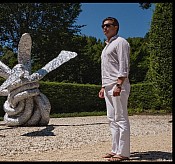 James Salomon is the Director of Achille Salvagni America in NYC. He occasionally takes photographs and tells stories for Whitehot and various art and lifestyle publications.