The ocean. It’s destructive. It destroys concrete, eats up wood, and rusts metal.

Artist Trevor Mezak has been watching the ocean’s power since he was a kid. He was introduced to it through surfing with his brother. Since then surfing has become a way of life. “It gets me going in the mornings. I feel good. If you feel good it shows in your work,” he says, voice almost filled with a sense of awe. He sees the ocean as an artform that he wants to capture, and he has found the perfect way to do so through the most unconventional methods.

“There’s a raw element of my art that comes from surfing,” Mezak explains as he talks about how his work stems from the natural world with which he is so fascinated. There is beauty at the beach that is mesmerizing to him: the way a sunrise reflects on the water, its movement around him. He often finds himself staring at the foam that forms at the end of a wave before snapping out of it lest he be engulfed.

Not only did Mezak grow up tethered to the ocean, but he grew up on his father’s construction sites. One of his earliest memories he has is of watching his father hammer hundreds of nails into a piece of wood to create a design. This was the first experience he ever had which combined construction tools and art. His father would then give him pieces of wood and nails so that he could create things himself. “I’ve always been an artist,” says Mezak, “even on construction sites, I always had more of an eye for the look of it all.” Mezak had the artistic eye for design that allowed him to see things already created in his mind despite not knowing exactly how to execute them when he was younger.

To create what inevitably became his current artistic practice, Mezak combined the two things that shaped his childhood the most: the natural world and working with your own hands. He works with materials like concrete and metal because they’re “a new kind of animal to figure out,” as he puts it. “I know how acrylic paints work on canvas, but I didn’t know what they’d do on concrete.” He wants to create work that is 100 percent representative of himself, and to do so he is constantly experimenting. He wanted to take his love for unconventional tools and blend it with his love for the natural world, taking both parts of his upbringing and molding a new artform.

However, Mezak didn’t start with this current use of concrete. He dabbled in animation and graphic design, but ultimately he ended up back where the ocean meets the concrete, where the waves crack. “I wanted to get away from traditional art supplies,” says Mezak. Knowing that artwork could be created using elements outside of traditional canvas and paint excited him, and he needed to explore the possibilities that these unconventional tools provided.

One of his first experiments was making canvases out of concrete. They are his foundation, and from there he begins to test different chemicals and their reactions. The use of gunpowder is probably his most extreme yet surprisingly controlled experiment. He thought burning gunpowder on concrete would lead to deep black burn marks, but instead it left behind a golden residue. Hydrochloric acid against concrete results in smoke and different colors. Bleach turns concrete white. Each experiment and chemical reaction is his way of turning concrete into a malleable, unexpected canvas.

Mezak is drawn to the dangerous elements of the world, something that stems from his surfing. Growing up surfing, he was able to see the danger and the beauty of the waves. It captivated him and he felt a pull to reach the same blend of the dangerous and the beautiful. When he was younger, he surfed for sports, meeting the ocean waves at their most extreme. This attraction to danger can be seen through his material choices but also in the beauty he sees within such danger. The current can be smooth and fluid, but it can also be tumultuous. Being by the sea can bring a sense of peace to the environment, but there is also the force of a strong current or storm. His aim is to bring the same harshness and beauty that the ocean is able to harness into his own work. The harshness of his work comes from the material elements while the softness comes from the subjects he depicts in the curved and fluid lines of the figure.

This experimenting doesn’t stop at the material level. His love for history led him to Japanese imagery. One of his friends owns a Japanese restaurant and wanted something to decorate his walls, so he turned to Mezak. From there, Mezak began researching Japanese folklore and mythology. “Art means always trying something new,” says Mezak. He wants to explore new subject matter, to find new ways to combine his love for the natural world and making something by hand.

His workspace is the perfect environment for constant inspiration. He works outside, partly out of necessity due to the dust and chemicals, but also for that kind of connection. For Mezak his environment has always and still has an enormous influence over his work. For him it’s all about good vibes. He grew up a child of the water and like the water he likes to move within its current. He doesn’t stress over the uncontrollable or hold himself back out of fear. Mezak’s mind is one of positivity. It’s how he was able to jump into his new way of creating. He didn’t let the fear of the unknown stop him from molding a piece of concrete into a canvas. For Mezak it’s also important that his workplace feels like home. So he built his space in his backyard knowing he could cater the environment to his needs. All his tools within his reach, the sound of the coast at ear shot, and his family nearby. One often finds his children, his dog, and, of all things, a rabbit running around him and his studio.

Trevor continues to experiment with his unconventional tools. He’s looking to explore more with abstract forms and Japanese-inspired work. There are still many other chemicals that he hasn’t even thought of using to create color and textures on concrete that he wants to mess with. Not only is he expanding on his figurative pieces, but he is looking to do more abstract work, to explore the natural movements precipitated by human-made tools and reactions. For Trevor art is a moving element, both artificial and organic, that molds itself into something new every time he sets it on its path.

For more on Trevor Mezak and his work, check out his website: https://www.trevormezak.com/. WM 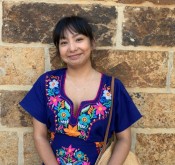 Kelly Quintana is an undergrad BFA writing student attending Savannah College of Art and Design, Atlanta. She is a fiction and non fiction writer whose work centers around diversity and social issues. She is finishing up her first novel and is working on query agents.