“May 2, 2018: A group of 20 students and faculty enter the room quickly and observe 20 watercolor paintings on the walls, and sit on the floor.”

This is the scene-setting, opening text to NYU graduate student and artist Thomas Ray Willis’ strange and highly captivating “NYU MFA Art Critique,” a 57-page transcript of this age old, art-academia right of passage, as observed and recorded by Samuel Hittin, a professional courtroom stenographer Willis hired specifically for this fascinating experiment.

“Are you part of the show?” asks the anonymous Speaker 1, who, as you might have guessed, was the first person to talk, if not the first to observe Mr. Hittin, this otherwise foreign body, lurking unannounced in what Willis' class most-likely assumed would be a closed and intimate ceremony, where their freely expressed thoughts and critiques, however harsh, would be theirs and theirs alone, set to vibrate, resonate and dissipate in an unspecified studio at 34 Stuyvesant Street in New York City, and possibly their hearts and minds thereafter, in Willis’ most importantly and enduringly perhaps.

“This is a recording?” asks Speaker 2.

“Yeah, there’s a note taker here taking notes for me,” Willis adds somewhat nonchalantly, a tone he impressively maintains throughout the crit. “I’m just curious to hear what you guys see or what you think you’re seeing before I explain everything.”

And so begins one of the more fascinating conceptual and clearly performative art experiments to come across this writer’s desk in quite some time. What follows, as recorded in the transcript, which was ultimately printed and packaged in book format and launched for sale at the non-profit Chelsea bookstore, Printed Matter, on March 8th, is a compelling group interrogation of art criticism itself and a hyperaware exploration of personal accountability for one’s opinions and statements, especially with the (correct) presumption that they might be rendered in permanent ink and made public down the road.

The experiment more than touches on the problem of consent, and therefore, may stand as a commentary on mass surveillance and data collection. It also disrupts the written and unwritten rules of art world etiquette. It’s about cognitive and empathetic dissonance, as it quickly expands into a deconstruction of the veracity, authenticity and fallibility of one’s potentially unbridled critiques outside of the most micro of echo chambers (the art classroom/studio); of course, an idea that can be exponentially scaled up well past the elitist, sharp-tongued, oft-ruthless New York art world silo, onward to global proportions in this interconnected and highly critical social media age of grossly removed, armchair dog-piling mobs and even fickler safe spaces. It’s an analogue, wake-up-slap to the face.

“I think that as soon as I know what I’m saying is being etched or like recorded, that I am aware of what I’m saying in my conversation or at least formulating thoughts,” offers the painfully hyperaware Speaker 4, shaken up and suddenly naked, as if he, she, or they, iPhone or not, were only just becoming sentient, like one of God’s naughty children.

It’s not surprising that some of the students in Willis’ class react rather defensively to the presence of the stenographer. “…Like I’m incredibly uncomfortable with this happening,” admits Speaker 1, before later noting: “Because these are so intimate (the paintings), they reveal so much about you, and so doing this, presenting that, you’re shifting this same vulnerability back on us, which kind of freaks me out.”

Even more perturbed are the classmates who quickly understand, whether they like it or not, that they are now part of, as Speaker 5 suggests, “a good idea;” something special, something clever, something inspired. What’s more infuriating than this?

“Because it sort of feels like you’re bullshitting us,” adds Speaker 6. “…Everything was leading me to decide that this is part of like a whatever, ‘experiment’ that you’re trying on us or whatever, and maybe it is, maybe it is not. It is what it is.”

“NYU MFA Art Critique,” was reenacted (performed) live and in full at Distillery Gallery in Boston on December 15, 2018, and once more during the book release at Printed Matter on March 8th. The experiment, for lack of a better term, has already gained institutional recognition, with the transcript being entered into the Museum of Modern Art Archives, the Whitney Museum Library and the New York Public Library. The book, paintings, and most likely another performance, will once more be the focus of Willis’ MFA Thesis exhibition, opening April 3rd, though it’s fair to speculate (and hope) that wily Willis might have something fresh and even more disruptive up his sleeve.

Now, as for those 20 watercolor paintings mentioned at the top of this piece. Though it would be unfair to call them inconsequential, despite their minimal execution and miniscule relation to the magnitude of the transcript and the ideas stirred up therein, they are somewhat interesting in their own right, and perhaps as crucial an element as the elephant in the room stenographer. Or perhaps the paintings are simply props and the students feel equally pawned. Far from inconsequential to the minimal paintings themselves, is the fact that Willis painted them using his own tears as the sole solvent.

Here’s a student artist, you might now be thinking, piling a gimmick on top of another gimmick as a means to insulate himself from valid criticism. However, based on what we’re seeing in the mainstream contemporary art realm, especially painting, and what we’re most likely about to see in the upcoming Whitney Biennial for instance, “talent,” that is, a clearly expressed mastery or “skill” within a particular medium, is to a large degree, not to beat a dead horse, inconsequential at this point. What makes Willis interesting, and if you must know and perhaps you should-he’s a white guy-is the possibility that he’s using his own raw emotional vulnerability as a shield. These watercolor paintings are, in a way, so offensively, and yes, perhaps only subjectively “bad” and overly emotional in context, that they serve as ingenious deflections away from potential white male privilege attacks, valid or not.

Several speakers directly accuse Willis of using the stenographer as “protection.” The presence of Mr. Hittin, in a wild role-reversal, makes privilege checkers stop and check themselves first, which allows Willis to take things a dimension beyond just insulating himself from criticism regarding the painting’s aesthetic or thematic merit, but from intersectional art world politics as well. Willis, who comes across as both madly sensitive, beautifully earnest, and somewhat mischievous, might be role-playing as the avatar for an increasingly and perhaps necessarily articulated young, contemporary, white male monolith, asking, “Are my tears not valid, my pain not authentic?”

Artist rendering of tear painting titled "My Mom Telling Me Over the Phone That Her Sister Died." Courtesy of artist.

Even the titles of the paintings, which Willis admits he’s hesitant to read out during the critique, are basically “Emo” song titles (a super-white genre), each illustrating the literal cause of his tears. There’s “My Roommate and I Having a Blow Up and Not Feeling at Home,” or “My Mom Telling Me Over the Phone That Her Sister Died,” and, “Missing Long Train Rides to Montreal and Wanting Love.” And yet, these are all universal access points to a universally human strain of melancholy.

Speaker 1 later points out, that the formal crit, and the stenographer especially, force those in attendance to take both the paintings (the “super-emotional” presence) and Willis’ emotions seriously, at least while Mr. Hittin (the “super-sterile” presence) is on the clock. The remainder of the transcribed piece becomes a living sincerity autopsy: What is real when we’re asked to take someone at their word in the post-truth age of fake news? It’s a rare, lively and rich debate, and one that clearly has legs, perhaps for decades to come. Towards the end of the transcript, Mr. Willis would note, that it’s the “communication breakdown” that interests him the most. The critique seemed to leave all those involved happily self-aware as well as pleasantly and unpleasantly fatigued. Both are good when it comes to art.

Willis' experiment evoked organic allusions to Laurel Nakadate, Andy Warhol, Anselm Keifer, Chris Burden and even Julian Schnabel, if only because Speaker 14 at one point noted that Mr. Hittin looked a bit like the artist and filmmaker in his younger days. 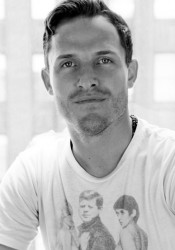 Kurt McVey is a writer based in New York City.