Curtis Cuffie’s Lost Street: Is There Life After Death?

With the number of deceased reported today, as the result the Coronavirus - in New York City alone, quickly approaching 30,000 (and more than 106,000 dead in the US) - it is natural to wonder if we have seen the last of communal life in our streets. When the avenues become ground zero to a pandemic, the place of fear masked and contagion shared, it seems inconceivable that they might return with any ease to a place of physical, creative exploration the result simply the advent of summer and the perhaps premature opening of gathering places; that lifestyle seeming in hindsight an anomaly, a foggy mirage the promised resurrection supposed “normal”.

Like the night blooming Moonflower, it was often each dawn that found the fruit of miraculous transformation in artist Curtis Cuffie’s arrangements of that material rejected, set curbside and filling industrial dumpsters and the recycling bins of lower Manhattan’s business and posh dwellings - new juxtaposition revealing a story of personal redemption, crafted of a community’s own flotsam and jetsam; like free jazz, each movement echoed in the next, a built syncopation intuitive and composed with what is immediately at hand - and brought spontaneously, to bloom in the mind. At particularly fruitful times in Cuffie’s creative lifespan, a near nightly convulsion respite, was revealed a practice of reclamation more pertinent than might have been anticipated - even at our present year’s beginning, long after Curtis Cuffie’s passing (2002). With the loosening of stay at home mandates, Manhattan and it’s four Burroughs (pre-rioting) were set to be repopulated by those individuals fresh from their summer homes, spinning yarns fabricated stall-side at the farmer’s market - of endured hardships while “sheltering in place” at their rustic retreats upstate, and in the Hamptons. Shabby Chic is long the faux-ragged hood, the colonizer.


A crucifixion of sorts, penance perceived ordinary, the feral practice of waste, indifference and greed; objects composed from a core support - a window gate, often a sign post or parking meter, or fence - and hung like ornaments on a Christmas tree with the carefree, sometimes erratic and flamboyant street presence likely today, to get a black man killed. And what better messiah than the intuitive make-doer, stalwart Curtis Cuffie. The streets of New York City of course, famously gave us the artworld luminaries Keith Haring and Jean Michel Basquiat to name but a few and the celebrated next generation of artists also employing the New York City thoroughfares as their canvas – these the privileged, if rebellious, skateboarding kids from places with manicured lawns and white picket fences (think KAWS). Cuffie however, found himself working in the streets of lower Manhattan not by choice but, by chance, life circumstance and without option. The sometimes, raucous carnival that was Curtis Cuffie’s reality, was an ad-hoc endeavor presenting our choices - via our trash - back to us; a brilliantly co-opted culture served up with your Grandma’s thrown out bow.

From his concrete canvas, Curtis Cuffie created works amongst America’s most important of the 1990’s, at the curbs of lower Manhattan’s pre-gentrified downtown. Commerce and rule of thumb were irrelevant to the creative inquiries Cuffie’s amorphous form, to reveal the instability of terra firma, and to reach for the sky. The masks will inevitably come down, it is behind the badge however, that we continue to kill the body and spirit of the black man. WM 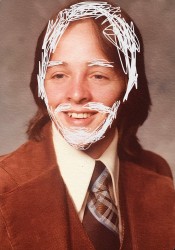 John Drury is a multi-media artist, published author, independent curator and instructor. Drury holds a Bachelor of Fine Art degree from the Columbus College of Art and Design (1983) and a Master of Fine Art Degree in sculpture (1985; including a minor in painting), from Ohio State University. John is the father of two teenagers, living in New York City since 1989 and has received the prestigious Louis Comfort Tiffany Award for his work in sculpture.