I can hear, underground, that sucking and sobbing,

The tight grains parting at last.

Geer tells me they’re the substance she imagines living under the city’s pavement. “How do things grow here?” she asks. “How do they have the strength to break through the pavement and live?”

I think they feed off the gum on the soles of our shoes. Siphon the nutrients from the slow decay of a once rotund rat, now melted into the sidewalk, its spine marked if you dare to crouch low. You can see her blooms strain after the rush of a skateboard, ca-chunk, ca-chunk, ca-chunks leaving behind chips of polyurethane to mix and mingle and become part of their mycorrhizal world. 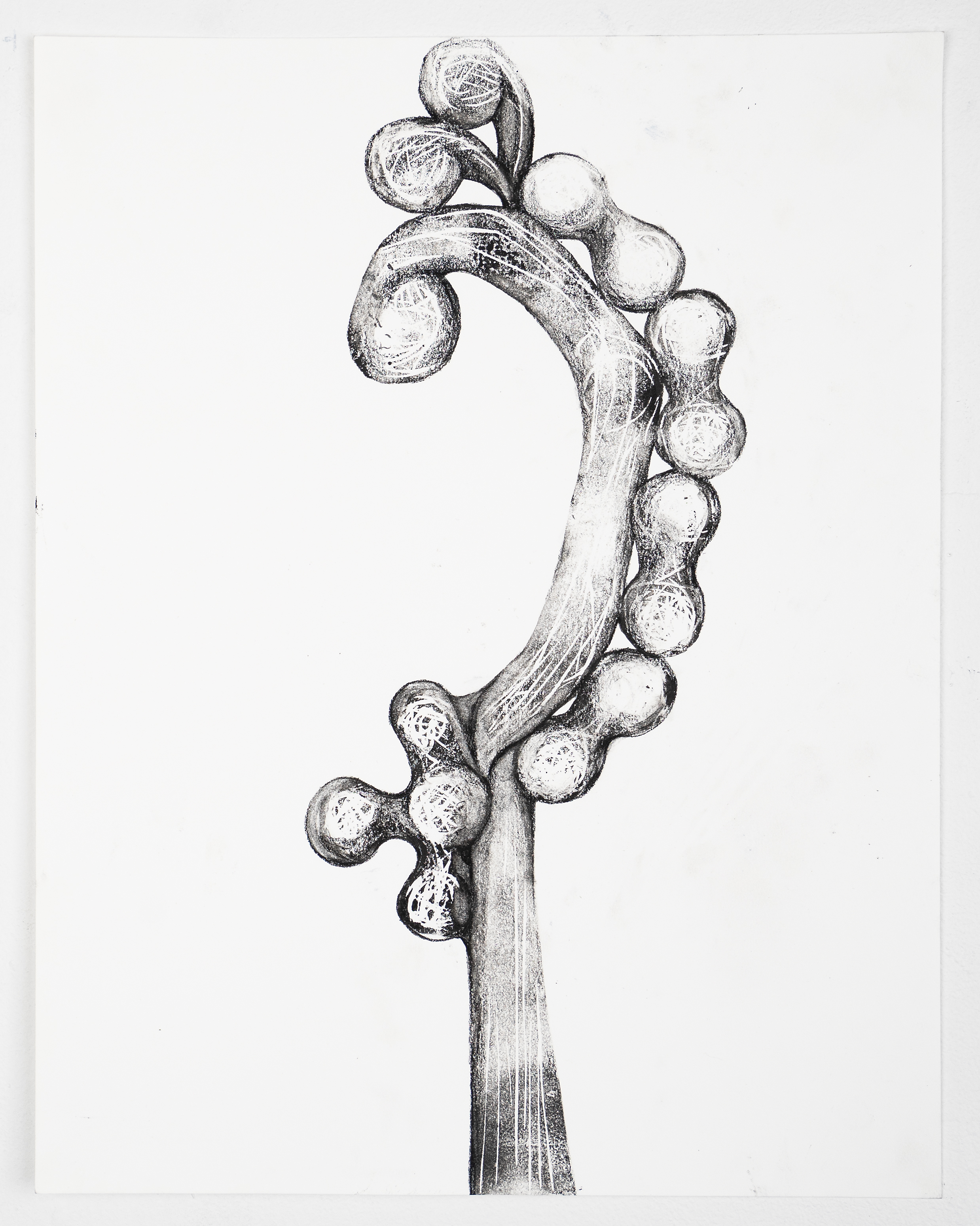 A few years ago, a scientist in Switzerland studying trees discovered that they communicate in ways similar to animals. He told The Smithsonian, “‘alarm and distress’ appear to be their main topics of conversation.” It is easy to imagine Geer’s strange blooms spinning their bulbous ends similarly in concert, screeching out warnings, “A hand truck! Glass bottle! Spiky heels! Shit! Spit! Saliva! A symphonic reckoning of the dregs we hysterically believe we’ve wiped off the welcome mat before stepping through our door.

In her own words, the monoprint drawings are “palpable, quickening, lumpy bulbs … in elevator shafts and gloomy laundry basements … zombie-like bloomings unfurling with delicate and ghastly paleness.”

I hardly know why I’m trying to explain them in my own words. Except where she sees “ghastly paleness” (and I don’t mean to quibble she’s the artist these are her creations), I see whorls of dark and light, fading and sharpening in rings like the years circling an ancient tree. 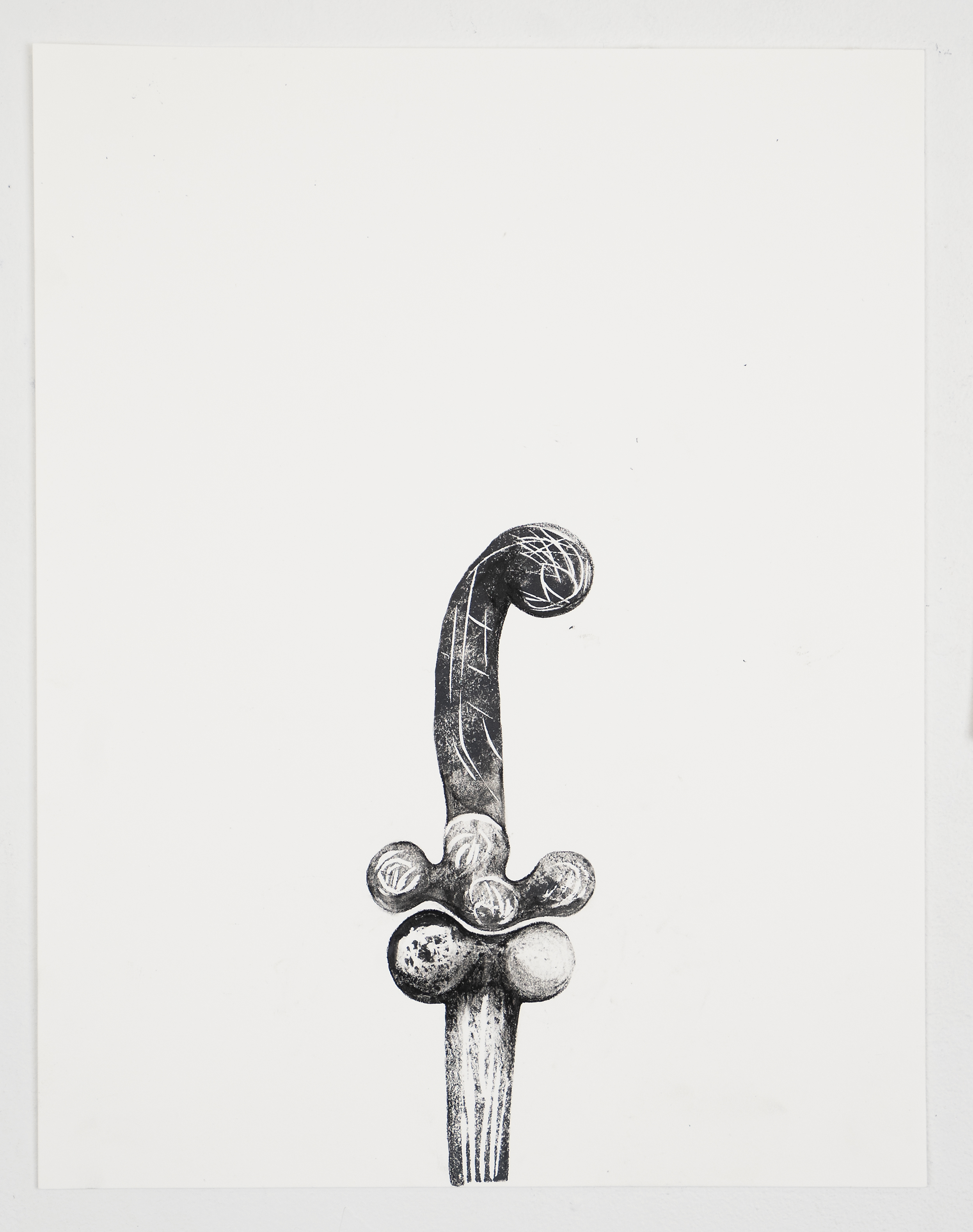 Geer tells me she tries to “pay attention to the skimmed over, unseen stuff.” That she’s “not so interested in beauty or things that grow in the limelight.” I find myself nodding along, yes, yes! I, too, once believed I should wear flowing dresses, my hair streaming in the sun as I raced through a field or some such bullshit, but have accepted that I am made of jeans and tank tops, coveting the smell of hoses splashing against hot tar as I stumble home in the dark. Yes, yes! Of course, these calcified bone blooms do not grow in the limelight, but they are infinitely more beautiful because of it. Can you imagine the strength it takes to crack through the pavement? To go FUCK YOU WORLD, and upend a sidewalk?

For Geer, who calls herself a “drawer,” the show is something of a departure — this is the first time she’s working with linoleum. Linoleum which she carved, then inked, then pressed into notebooks, then carved, then inked, then pressed another whorl next to, then carved, then inked, then pressed a knob that connected them together like deranged puzzle pieces. This creative departure was itself, an unforeseen result of a physical departure. During the pandemic, Geer and her family left the city to live in an old farmhouse in the woods of Massachusetts. While there, she did what so many did when they moved to the country to wait out the storm — she toiled in the garden. She dug her hands into the earth to see what she could find. One year later, back in Manhattan, she noticed with recalibrated eyes “the way everything had been touched, and painted, and sanded, and caulked, and dirtied, and worn down.” 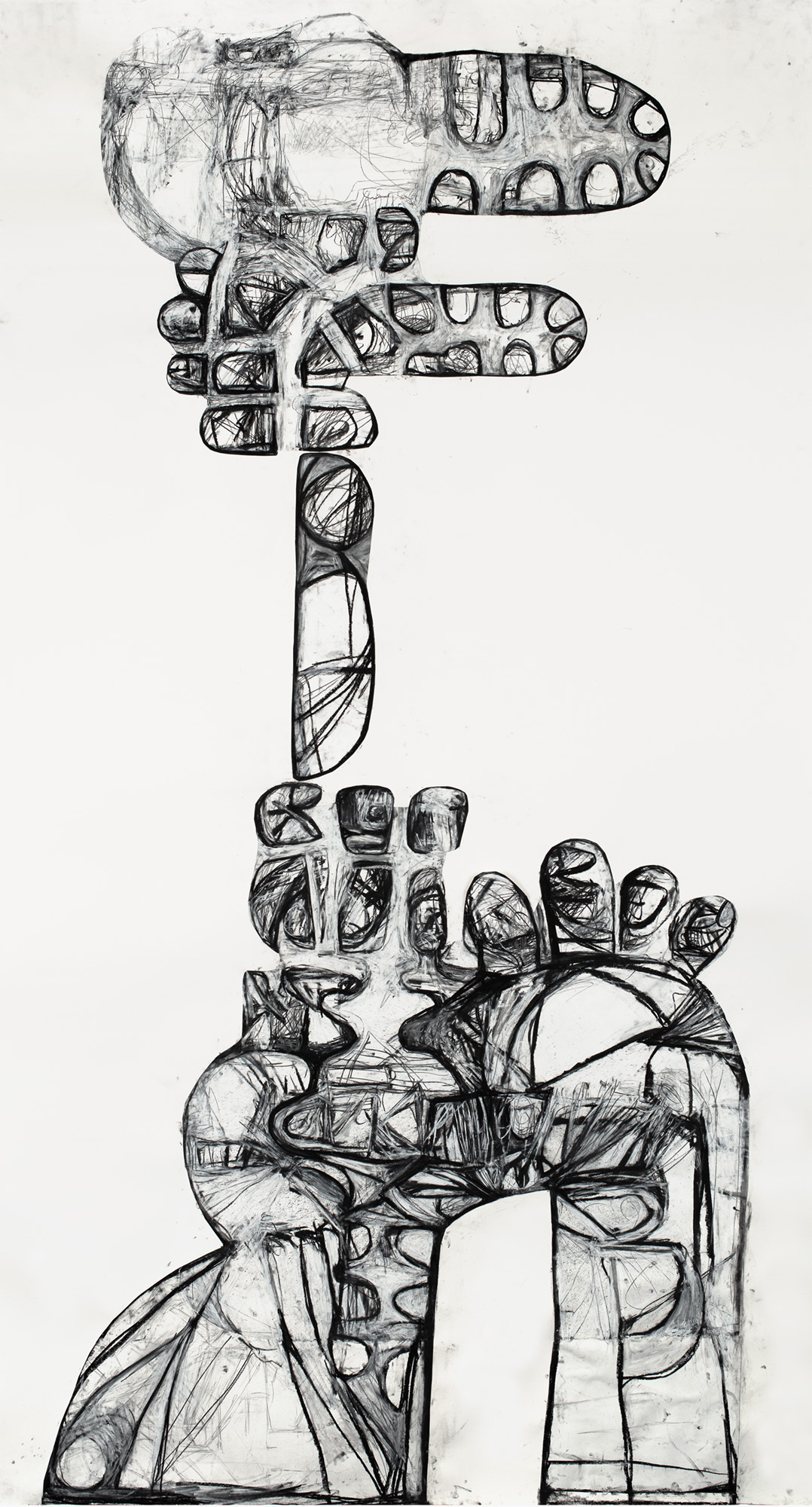 But instead of lamenting, she listened, and heard an “almost insane heartbeat,” two of which belong to the large giraffes gracing the walls. How large are they? I’m consulting the PDF now… They are 90x49, nearly nine feet tall, and consist of “drawing, collage on paper, charcoal, glue, pastel, chalk and graphite.” The giraffe’s heads disappear into the clouds. They are obviously in mid-conversation, facing each other, the one closest to the door is listening. The other is talking. I think she sounds like a guiro — a little wooden scraper running across the ridges of a gourd. If they came to life, their bodies would bend in unexpected places like vacuum extenders. They’d be made out of bubble wrap and rocks, old ads from a vintage Playboy, unidentifiable objects your child, gasping with delight, pulls off the asphalt and keeps in bowls on the kitchen counter next to the bread box someone got you as a joke, once, long ago.

Geer says her giraffe’s lips blew out at her as she drew them, “adding a note of faint, preposterous, magnificence.”

Coincidentally, giraffes communicate with trees, at least in sub-Saharan Africa, where they snack on wide-crowned umbrella thorn acacia. Acacia, like people, become alarmed when bitten, and send out distress signals to other acacia around them in the form of ethylene gas. This, effectively compels the neighboring trees to flood their leaves with tannins which apparently giraffes find disgusting. Lucky for them, they’re onto such horticultural deceits, which is why they move their long bodies into the wind, toward trees the gases cannot reach. WM

Deborah Stoll’s first book, Unvarnished, “A Kitchen Confidential for the cocktail profession,” was published by Harper Collins, June 2020. Her second book, Drop In, about the rise of female, LGBTQ and non-binary skateboarders, is forthcoming from Harper Collins summer, 2022. Her essays and articles have appeared in the LA Times, The Economist, LA Weekly, SF Chronicle and Punch Drink. Her band, Hot As Sun, has opened for Phantogram, Foster the People and Gotye.