All of Susan Hiller’s work is about ghosts: the unknown, subliminal, haunting and hidden relics of our past and present lives. Covering the span of her oeuvre over the past 40 years, the exhibition currently showing at Tate Britain is an in-depth survey of her most poignant and important works to date, many previously shown in her solo exhibition at Tate Liverpool in 1996 and at other London-based galleries such as the Hayward Gallery and Matt’s Gallery. As an American artist permanently relocated to London and previous student of Anthropology, she perceives various cultures in a way that enhances her work and gives it an approach unlike many other artists working at this time.

In the first room, one is confronted with an array of documentation and historical pieces called Recycled Works that have been re-appropriated from when she first made them in the seventies. With Hand Grenades (1969-72) and Untitled Painting Blocks (1970-84) we see examples of works she shredded, piece-by-piece or burned down into ash. It is a perfect starting point to understanding her fascination with cultural relics and the importance that society puts on these objects. Saved and labeled either in glass jars or in hand-made books, the ghosts of these works have been subjected to a scientific system of taxonomy.

This theme continues in her next few works entitled Dream Mapping (1974) and Dedicated to Unknown Artists (1972-76). The notebooks for Dream Mapping are the most interesting aspect of this project and they are beautifully displayed, albeit not usable, therefore taking away the more personal, fascinating experiences of her participants. Although a very important work, it was glossed over in this exhibition and the sense is that the viewer would not really get the whole picture - one that includes the importance of one of her first "participatory" or "field research" anthropological studies of the subconscious.

With the Rough Sea postcards in Dedicated to Unknown Artists, Hiller gives another nod to her academic studies, but in a rather more undermining way. The text, which she has always felt was an important aspect to any artwork and was just as important to the ‘creative’ or ‘aesthetic’ product of that work, allows the viewer to read her discoveries and assumptions based on strict cataloguing of these postcards. Reflecting rationality and control, this precise system of sorting is an almost humorous jab at the tediousness of classifying something so popular yet unimportant to nomenclature. It is only the title of the piece that gives it sentimentalism, dedicating her obsessive collection to the unknown and forgotten artists who painstakingly hand-coloured or painted the ‘rough sea’ onto them.

The beautifully installed 10 months (1977-79) and Automatic Writing (1979-81) seem to be the works that most strongly reflect her apparent "feminism". but as she states herself "the subject matter of a work is not its content." In Automatic Writing, she says clearly that although it is her ‘hand’ writing these words, they have no characteristics of her. She is not claiming she is a Sister of Menon (i.e. anagram for no men she says?), but that the Sisters of Menon might have existed at an indeterminate time in history. She again upsets her academic leanings and relies on a subconscious action to uncover possible hidden truths.

Monument (1980-81) is a substantial installation with a wall of digital photographs taken of memorials found in a hidden garden in London. This work is one of the strongest in the exhibition as it covers nearly every aspect of Hiller’s work - memory, death, eternity, fear, time, space and representation. As she says on the tape, each person on the wall "exists forever, inscribed, portrayed as inscriptions, portraits, representations." Their waking life was nine years, but their representative life is so far twenty-five years. She muses over our culture’s fascination with memory, which can be reduced to the fear of death and passing of time. Magic Lantern (1987) and Belshazzar’s Feast (1983-84) continue to detect ghosts through recordings and television. Is it just our imagination or are ghosts really trying to communicate with us from beyond the grave?

Continuing, one sees some interesting films and projects from the nineties. An Entertainment (1990) is a twisted exposure of how violent the children’s puppet-show Punch & Judy truly is. From the Freud Museum (1991-96), originally made for the Freud museum in London in 1994, contains 50 boxes of collected material by Hiller, which she states "is an archive of misunderstandings, crises, and ambivalences that complicate any such notion of heritage." Once again, undermining but using anthropological practice, she finds a way to connect museological display with common artefacts of our age, ranging from a Ouija board with the label amuse/âmuz to a wooden hand with an image of psychometry labelled Handicraft/skill. Psi Girls (1999) deals more directly with Hiller’s ideas of paranormal activity featuring scenes from Hollywood movies of young women with psychic abilities. The energy and tension builds up in this dark room very quickly and then just as suddenly stops and becomes silent in order to start over again, perhaps harping on the young female anger and sexuality that sparks their own psychic abilities.

On the way towards the exit is the extremely valuable The Last Silent Movie (2007) in which Hiller collected recordings of extinct, nearly extinct, or very endangered languages spoken all over the world. Whistling, singing, story telling, reading, saying prayers and lullabies, and discussing their history are all things that these last native speakers do. It’s more than an artwork; it’s an invaluable resource for generations to come that has recorded an old way of life, an old way of communication. One major installation entitled Witness (2000) entirely encompasses the visitor. This collection of supernatural experiences is made up of voices from all over the world beckoning you to join in with the hanging wires and speakers and place them to your ear. With a bright light shining down into the middle, the shadows of these speakers create UFO shapes on the floor as voices mix and mingle, inviting you into other worldly possibilities.

This is now the exit, but the show is not over. Outside of the paid entry galleries are two works: The J Street Project (2002-5) and Enquiries/Inquiries (1973-5), both of which very much enjoy the use of language in the context of where one is living. As a fellow American living in Britain, I understand the play between the British version of English and the American version, but her extracts from the respective encyclopaedias in Enquiries/Inquiries does not delve much deeper than that. With The J Street Project, she also highlights the use of the word "Jude" or "Jew" as used in street names in Germany. Shown in various formats such as a film, a book, an index on the wall, and a map, it is a very descriptive piece. The film is the least successful as it tends to dwell on the emptiness of those streets, which is indeed what she means to do, but the underlining meaning is not evident. Her conversations with the people whom live on those streets, which she mentions in an interview in Montreal in 2006, would have made a more interesting piece as this reflects more on the changing attitudes of this phenomenon. Collecting the street names is similar to collecting the Rough Sea postcards, however in this case, the format in which its shown fails to justify the work’s importance.

Her recent Homages to artists such as Joseph Beuys, Yves Klein, Marcel Broodthaers, Marcel Duchamp, and, the latest, Gertrude Stein at Timothy Taylor Gallery are simpler refined photographic works that play with the notions that inspired her work. She collects these photographs from online sources and re-appropriates them to reflect possible beliefs in these images as magic or paranormal.

Susan Hiller’s work is not pretentious or overdone. It is inspired by her desire to collect and discover ironic, subconscious or even hidden aspects of a society or people; the ghosts that haunt our daily lives and experiences, and the fascination with other worlds or possible truths. She doesn’t make work to sell or look aesthetically beautiful, although at times it does, but she delves into the understanding of why people do things and she aims to collect these random thoughts and notions into a way that can be shown within an artistic context. This is what art is about and this exhibition will inspire and encourage you to continue to search and maybe even to believe. 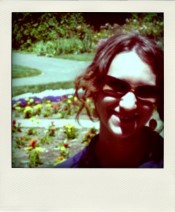 Chelsea holds an MA in Visual Anthropology from Goldsmiths College, University of London. She currently resides in London, but hails originally from California. She is Assistant Curator for the Hayward Touring Exhibitions programme and writes about art in her spare time.

Her blog can be read here: http://www.paintingofmodernlife.blogspot.com/