September 2008, Against the Grain @ LACE As Oscar Wilde’s Dorian Grey grows agelessly, sinfully into a man, his portrait holds in its oily features all his weathering, his viciousness and cruelty. Dorian’s debauchery is influenced by a “poisonous French novel”, one that many critics contend could be none other than Joris-Karl Huysmans’s À rebours (“Against nature” or “Against the grain”). À rebours itself opens with a description of framed portraits of a family, the most recent of which portrays a man whose features suggest a decadence and “effemination” caused by centuries of the gloomy subject’s family’s intermarriage.

The premise of both of these novels is a kind of crazy moral spiral away from their contemporary norms, but also, in a way, the idea that representation – painting, specifically – can play a key role in the way we understand our own moral trajectories. The publication of À rebours signaled the emergence of “Decadence” as a “distinct, recognizable literary sensibility in France”, says Asti Hustvedt in his introduction to The Decadent Reader: Fiction, Fantasy, and Perversion From Fin de Siecle France. Says Hustvedt, “decadence puts forth the idea that the function of literature is to evoke impressions and ‘correspondences’ rather than to realistically depict the world” and “decadence takes degeneration as its creative source… [T]he decadents aestheticized decay and took pleasure in perversity… By embracing the marginal, the unhealthy, and the deviant, the decadents attacked bourgeois life, which they perceived as the chief enemy of art.”[1]

This act was apolitical, though it had political effect. Chiefly, these writers and artists at the turn of the twentieth century objected to social homogenization at the hands of the bourgeoisie, and they advocated a sort of willful disobedience and bodily carelessness arguably foreign to the responsible cultural climate of 2008. To call upon this literary precedent is to conjure a proud weakness of character that blithely blows up gas stations instead of paying high prices, then skulks back to dingy lofts to smoke cigarettes and fuck condomless and make artless art out of – I don’t know – bread.

In the group of fourteen LA artists Christopher Russell has put together at Los Angeles Contemporary Exhibitions, do we have our modern Decadents? The show, Against the Grain – as well as its precedent of 1988 at LACE, Against Nature: A Group Show of Work by Homosexual Men – takes Huysman’s novel as its aesthetic catalyst. The earlier show looked at decadence in the art and lives of gay men as a particular kind of social rebellion within a politically conservative era, and considered the way gay men represent themselves. The current show doesn’t cohere through specific issues of identity, but through a contemporary rhyming of mundane material practices and the closed circuitry of personal mythologies.

Robert Fontenot choreographs an extended narrative of mythic proportions all along one of LACE’s walls: children are born from the loins of squatting, smiling women, only to be eaten by their parents. Those that escape this fate turn on their fathers and mothers and tear off their legs… This elaborate Lilliputian scene is rendered in toothpicks and yes, bread.

Wendell Gladstone paints archetypal imagery in acrylics, seemingly inspired both by the world of commercial design and a strong religiosity. One painting, Communication Enlightenment, begins at the top in a kind of stained glass silhouetting, linked to an upside down Christmas tree via ribbons of fluorescence. The heads of men in the top portion of the painting double below as glowing lights on the tree. Offering pictures something along the lines of Judith and Holofernes, with severed heads rendered again in acrylic that looks surprisingly like more like a series of Mylar cutouts.

Gladstone’s work comes the closest of this group to reaching out to established iconography via a traditional medium. Still, Brian Bress’s Disaster Family looks very much like a Nativity – its four figures and the tableau in which they stand all fashioned from disaster blankets. The blankets, stapled to wood, are Pollack-ian in their thready palate. Julian Hoeber’s Wink Reflex refers to another kind of aesthetic archetype: the grid, or a fashionable plaid, depending on your perspective. Hoeber has said that for him, decadence is “about decay, albeit a decay through excess… A lot of the excess in the work is derived from sensation. The scintillating grid – that’s the mathematical name – over the black drawing… as well as the confusion of figure and ground should function as a kind of experiential excess, though quite contained.”[2]

The Decadence of this group – in staunchly literary terms – derives from the heterogeneity of the work, the elective affinities of each artist for their own subjects and means of portrayal. They take art and social history, neutered by time, and reinvest them with potency through idiosyncrasy, thus, a fantasy, a perversion of fact, a representative strategy thrust “against the grain.” 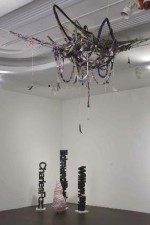 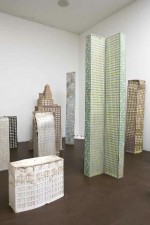 Farrah Karapetian, artist, lives and works in Los Angeles, where she
looks forward to the opportunity to blow up a gas station.