Altered States of Perception in the Work of Scott Billings

In 1918, Dziga Vertov made a death-defying leap across rooftops and filmed it with a slow motion camera. Years later, the Soviet filmmaker wrote in his notebook that when he saw the result of that risky jump projected onto a screen, he did not recognize his face, but could recognize his thoughts and emotions.[1] Inspired by this passage from Vertov’s writings, Vancouver-based artist Scott Billings set out to make his own risky jump. Presented at Wil Aballe Art Projects (WAAP), the video installation A Risky Jump – which also gave the exhibition its title – was displayed alongside Cygnus X-1, a sculptural object, and Stanley Theatre Box Shot (Sorry, We’re *L*S*D), a video loop played on a small flat screen. The subtitle of the latter work established the tone of the exhibition, which exposed visitors to altered states of perception.

Visitors were drawn into the main space of the exhibition not only by the video projection of A Risky Jump but also by the complex apparatus used to present it. Indeed, for the presentation of this piece, Billings had mounted the projector on a stainless steel rail along an aluminum I-beam. That same apparatus was employed for the shooting of A Risky Jump; a Phantom camera (filming at 7500 frames per second) had previously occupied the place of the projector. A production photograph, displayed at the entrance of the exhibition, revealed the set-up for the quite elaborate fall staged by the artist. During the shooting, the camera had to be in perfect sync with the vertical trajectory of the artist’s fall. Its failing to be in sync would have resulted in shots in which the artist's body was either absent, cut off, or higher or lower than the visual field. The artist used a high-speed camera for capturing several frames so that the sequence of the fall could be projected in slow motion. The artist’s desire was to open the human eye to what Vertov has termed the “Kino-Eye”, or the realm that “the naked eye does not see.”[2] Billings’ approach also relates to what Walter Benjamin called the “optical unconscious”. In his 1931 essay “Little History of Photography,” Benjamin wrote that the slow motion devices of the camera enabled one to see movements that the naked eye could not see. What the slow motion triggered in Billings’ A Risky Jump was an alternate state of perception in which our relationship to time and space changed drastically.

Played as a loop, the video sequence begins with a view of the artist huddled up on the floor in front of a window, appearing to be asleep. As the projection slides down on the wall, we come to realize that the sleeper is resting on a trapdoor that opens up, resulting in his fall. The fall wakes up the artist and his facial expression changes: starting out as restful and peaceful, Billings’ look becomes one of great surprise tinged with fear. When the artist begins to slide down the open trapdoor, he does not attempt to hang on, nor does he look at us to seek help, as though he has already accepted that gravity would win the battle. His 13-foot fall ends when he lands on a crash pad. As if nothing had just happened, the artist curls back into his initial position and falls asleep again. In real-time, the fall recorded by the artist lasted only one second, and his landing and repositioning a few additional seconds. Slowed down, this event lasts over seven minutes. The extended duration enables the viewers to witness the details of that so-called risky jump. At the end of the scene, which is projected at floor level, the image turns black and the projector climbs back up to the top of the I-beam. Then, the projection starts anew, as if the artist was doomed to fall endlessly. A Risky Jump is not uniquely about the theatricality of a fall, but rather invites us to consider the mechanisms required to achieve a perfect, or at least a successful take.[3] Billings’ interest lies not in exhibiting himself, but in making visible the complex apparatus used in producing a cinematic scene.

In addition to Vertov’s 1918 leap, Billings’ A Risky Jump speaks to two other moments of the history of cinema, one that preceded the Soviet filmmaker’s jump and one that followed it. The absence of narration in Billings’ video links it to early cinema, and more specifically to what has been named by film scholars André Gaudreault and Tom Gunning the “cinema of attractions.” As Gunning argues in an article first published in 1993, early cinema “attracts a curiosity that is satisfied by surprise rather than narrative suspense.”[4] The viewing of Billings’ A Risky Jump creates a similar effect: one is surprised by both the staged fall and its extended duration. The video has no storyline; rather, it is about showing a cinematic trick imagined by the artist and the necessary mechanisms conceived for shooting it. Moreover, A Risky Jump can also be interpreted as the antithesis of Andy Warhol’s first long-duration film Sleep (1964), in which the poet John Giorno is seen sleeping for 5 hours and 21 minutes. In Warhol’s film, we do not observe Giorno falling asleep nor do we ever see him waking up. For the entire duration, the poet is simply sleeping. In Billings’ A Risky Jump, the action of sleeping is being disturbed by the action of falling. Yet, the fall doesn’t prevent him from falling asleep again. The combination of both – falling asleep and falling through a trapdoor – makes one wonder if the recorded fall belongs to the world of reality or to the world of dreams. Does it even matter to be able to make that distinction?

The trapdoor through which the artist falls is a protagonist in A Risky Jump, but also plays an important role in Stanley Theatre Box Shot (Sorry, We’re *L*S*D), since at two different moments, the camera emerges through a trapdoor, from the dressing room located under the stage and enters the performance space of the theatre. Just before it enters the public space, one can see a sign turned sideways, which reads, "Sorry, we're closed". However, the letters c, o, and e in "closed" have been erased, to make LSD, hence the subtitle of the work. After leaving the dressing room, the camera first travels vertically across the main stage before zooming in through the empty seating area and towards the control booth. While zooming in, the artist used an iris shot (in the shape of a rectangle) in order to call the attention of the viewers to the control booth. Later, the camera zooms out (combined with a reverse iris shot) and suddenly the supposedly closed theatre is filled with an audience. This unexpected apparition of people makes the viewer ponder if they are hallucinating, especially since the crowd is composed of a limited number of sitters that are repeated in each row. While this seems to mark the end of a loop, it is in fact not. In the subsequent shot, the camera proceeds to follow the same trajectory, tracing the line of an imaginary box in space, but when the lens zooms away from the control booth, the theatre is deserted. By choosing to alternate these two shots, Billings skilfully plays with our awareness; he makes us travel back and forth between a state of what we think is accurate perception and a state of illusion.

The title A Risky Jump may have been attributed to another work in the exhibition, but the riskiest jump of all was nevertheless evoked more clearly in the last piece on display in the exhibition, Cygnus X-1. The title of this work refers to a black hole found in the Cygnus constellation and to a two-part song by Rush; the first part of which concludes the album Farewell to the Kings (1977), and the second part begins the album Hemisphere (1978). Billings’ Cygnus X-1 consists of the splicing together of two 8-track tapes of these albums. Of the different types of traps Billings explored in the works displayed in the exhibition, the black hole is by far the most dangerous one. Though Rush’s Cygnus X-1 is not played in the gallery, as Billings merely exposed the magnetic tape of the albums, if one pays attention to its lyrics, one discovers that the journey of the astronaut narrated in this two-part song does not end when his spaceship is pulled into the black hole. As it happens, the second part of the song takes place in the “beyond”, where the astronaut is found in the company of deities and rulers of the ancient world. In contrast with the scientific perspective of the black hole as a point of no return, in the song by Rush, the black hole enables a person to move from one world to another.

In the three works that Billings presented at WAAP, the trapdoor – both physically and metaphorically – played a central role. The trap was evoked as a connector between different worlds, as a prime mover of creation, but also as a deadly threat. Emerging from a trapdoor, as is the case in Stanley Theatre Box Shot (Sorry, We’re *L*S*D), can lead to the discovery of aspects of the world of theatre (and cinema) that we do not usually get to see. The metaphorical use of the trap in Billings’ latest solo exhibition also enabled the artist to complicate the question of the relationship between the naked eye and the Kino-Eye. Indeed, his exhibition was not a simple experiment on how the camera can enable one to see more, but rather, it invited visitors to think about the possible connection between the world of reality and the world of illusions, and when and where art succeeds in blurring the two.

[1] Dziga Vertov. “The Writings of Dziga Vertov”, in P. Adams Sitney, ed. Film Culture Reader. New York: Cooper Square Press, 2000 (1970), p. 363. Different descriptions of that risky jump appear in the literature. In some cases, it is reported that Vertov jumped across rooftops and in others that he jumped off a balcony. See Annette Michelson, ed. Kino-Eye: The Writings of Dziga Vertov, Berkeley: University of California Press, 1984, p. 40-41 and 123.

[3] Billings mentioned during a public discussion with artist Marina Roy that the making of this piece required 25 takes. One of them was finally selected and slowed down. 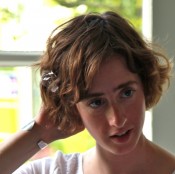 Ariane Noël de Tilly holds a doctorate from University of Amsterdam and was a Postdoctoral Research and Teaching Fellow at the University of British Columbia from 2011 to 2013. Her research deals with the exhibition, dissemination and preservation of contemporary art, and the history of exhibitions. She has written on the work of BGL, Stan Douglas, Douglas Gordon, Jenny Holzer, Mike Kelley, John Massey and David Rokeby, amongst others. She is currently an art history instructor at Emily Carr University of Art + Design in Vancouver, Canada.