One moon shy of Mother’s Day, Saturday May 7th, Grace Exhibition Space and Legacy Fatale present “The March of the Women” and “The Lasso of Truth.” Coming upon the centennial year of the Suffragettes, these performances are part of Grace Space’s series 21ST SUFFRAGETTES: INTERNATIONAL PERFORMANCE ART BY WOMEN, a seminal Brooklyn performance art event curated by director and co-founder Jill McDermid.

If you haven’t yet had the pleasure of experiencing this righteous clan of zebra-striped femme fatales, Legacy Fatale is an interdisciplinary performance art collective based in New York City since 2008. Co-led by Coco Dolle and Shawn Bishop, the troupe performs experimental dance-based works in the spirit of the Amazon warrior women, what we know mytho-historically as the most complete realization of Matriarchy. Amazons were nomad warriors of intercultural origins, sometimes called “warlike man-killing virgins.” Phenomenon of Amazonism, characterized by immense acts of female power and bloody vengeance against men, are interwoven with the origins of societies throughout Asia, Europe and West Africa.

To kick off the event at Grace Space May 7th, modern-day Amazons Legacy Fatale and company will begin with a spirited march from Maria Hernandez Park in Bushwick to Grace Exhibition Space. Recently back from Manchester, while in the UK the group performed a new work celebrating suffragette herstory for Alexandra Arts’s annual Wonder Woman festival. The Wonder Woman festival is part of the larger, comprehensive initiative of Manchester-based artist Lotte Karlsen to enact community art in Alexandra Park, turf upon which the suffragettes led some of their very first riots and rallies. Legacy Fatale will continue this thread in their work for the NYC-based sister project 21st Suffragettes.

Their May 7th marched procession is named after the official suffragette anthem “March of Women,” composed in 1910 to be sung on the streets of London by freedom-fighters in action. It goes, “Hail, hail — victors ye stand,wearing the wreath that the brave have worn!...March, march — many as one, shoulder to shoulder and friend to friend.” Says leader Coco Dolle, her modern day appropriation of the March of Women concept is about “empowering one another, coming together, solidarity, support and tapping into ancient truths – excavating the collective memory of female power.” Twenty women strong, the group’s symbolical reenactment of the suffragette march for women’s rights in Maria Hernandez Park this Saturday will include performers singing the original anthem paired with beats on a Native American tambourine in an activist gesture with shamanic and political overtones. 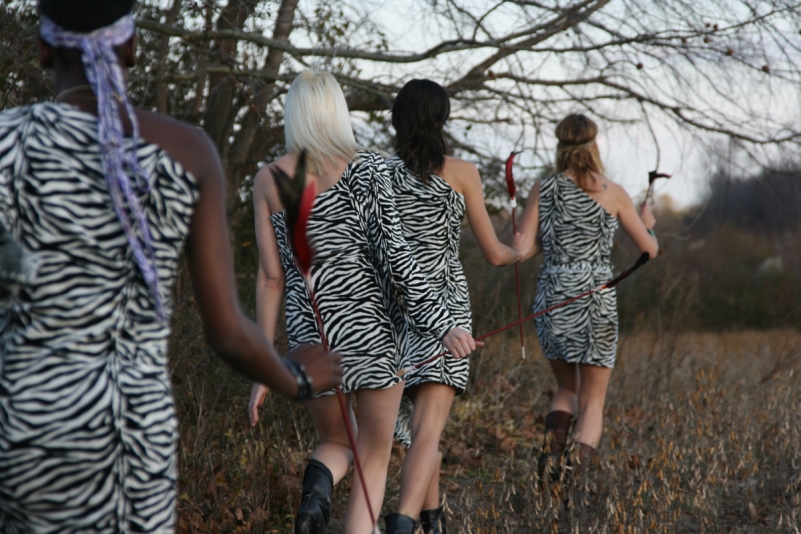 "Hunting for Basel", Legacy Fatale on the road to Art Basel Miami, 2008

Following the parade, Legacy Fatale will present “The Lasso of Truth,” a performance directed by co-leaders Coco Dolle and Shawn Bishop. Set in the gallery space with an original soundtrack by experimental composer Pierrot Carrilero, the choreography opens in a style influenced by the work of Simone Forte and Bob Fosse. The Lasso of Truth is comprised of 5-parts, blending the ancient myth of the Amazons with the contemporary pop icon Wonder Woman and the strategic visual vocabulary of the historical suffragettes.

A 40 minute piece, The Lasso Of Truth explores the rise of female power through symbolic dance, action activism and a battle sequence inspired by the practice of Bartitsu, a martial arts-like self-defense technique suffragettes used to fight off police brutality (wearing their petticoats and stockings of course). A mandala formation honoring Wonder Woman as “Uber Woman” and a culminating meditative element complete the work. The theme of ropes runs throughout the piece, symbolizing at once the chains of patriarchal oppression overthrown and the interconnectedness of a new paradigm grounded in feminist humanism. The exhibition press release explains that the ropes appear as “vectored ties forming a delicate network that connects.”

Dolle claims that according to popular lore, Wonder Woman represents the missing link between the suffragette era and the Amazonian age. Probing the political, ancient and pop, Legacy Fatale recruits the modern day Amazon amongst its local community of women – gathering artists, performers, mothers, healers and friends from various origins, ages and social circles.

In an age still overshadowed by the one-sidedness of white male patriarchal history, it is perhaps in myths – and mythic reenactments such as the work of Legacy Fatale – that we can best access the living archetypal memory of pre-historical moments lived out by the human race. Matriarchy was the pre-historical cultural stage, and it is such that only in myths do we find a clear picture of this era in which earth wisdom, mother rites and female power was most central to human existence and spiritual life.

Katie Cercone was born 1984 in Santa Rosa, CA and is an interdisciplinary artist, yogi, writer, curator, and instructor of a course called Gender Trouble at the School of Visual Art. Cercone has published critical writing in ART PAPERS, Brooklyn Rail, Posture, Hysteria Magazine, Bitch Magazine, REVOLT, Utne Reader, N.Paradoxa and Public Art Dialogue, as well as curated shows for Momenta Art, Sensei Gallery, Cue Art Foundation and NurtureArt. Cercone was a 2015 National Endowment for the Arts Fellow for the JUSFC Exchange Program in Tokyo, Japan. Check her out on instagram as @MysticalRatchet