“For life and art to advance side-by-side, poetry and power must be juxtaposed in harmony,” says Lin Shih Pao. “Yin and yang must balance rationality-reason and sensibility-emotion.”

Perhaps that is why recycled materials have served as the Taiwan-born artist Lin’s primary material resource throughout his daring career despite being trained in traditional art forms. Lin Shih Pao is situated between the worlds of traditional art, the social and everyday objects.

He is widely known for his Pennies for Peace (1995-1997) project, in which he collected one million pennies from some 2000 people, combining social sculpture with what eventually became a very tangible object: a 3.5 ton sculpture 8 foot high, 8 feet wide and 2 feet thick. The striking tondo (circular) shape with 5000 dimes in the center core laid the groundwork for what was to follow.

The recycling of familiar materials have comprised what he now calls “conceptual sculpture.”  In 2006, he collected two hundred thousand pacifiers and used them to form a Christmas tree. He gathered 25,000 used mobile phones to create F1 Like Car in 2015. In 2019 he collected 25,000 baseballs to create The Tree of Hope in Missouri and finally his Chinese Zodiac, an ongoing series since 2018, consists of astrological symbols constructed from thousands of donated New York subway MetroCards.

Lin Shih Pao lives and works in New York, while maintaining strong ties to Japan and Taiwan. He was born in 1962 in Taiwan and moved to New York in 1995, where his work still reflects a profound central concept of Asian philosophy: a deep sympathy for the needs of human beings including himself and others that he manifests with the democratic character of his work with his creation of “post-surreal” landscapes in paint, sculpture and installation that also utilize the very 21st Century art form of communication. Lin uses his unique communication skills with others to collect materials for his art and then communicates that art back to the public with a finished, transformed product, completing a sacred cycle.

Lin’s latest series of works, Golden Age, will convey that “endless view of the universe,” at this year’s edition of Artexpo New York, taking place April 7th through 10th at South Street Seaport. Lin joined the Crystal Window & Door Systems, Ltd. in New York in 2014 as an artist-in-residence. As soon as he saw the discarded window materials, he knew they presented an opportunity for rebirth as he transformed this debris into a series of sculptures by heating, reshaping, and gilding PVC in a style reminiscent of baroque architecture.

“My entire life has been devoted to art. Golden Age represents my philosophical methods in moving toward the future through the use of everyday household materials to explore notions of infinity. At the factory in Queens, I discovered a creative heaven,” he said. “I began to explore how to transform discarded materials into my own creations. I shaped the left-behind PVC window frames freehand using high temperatures to imbue reused materials like PVC into my own handicrafts with beauty and value, finding a new contemporary aesthetic.”

With the works of the Golden Age, each of his “affectionate” sculptures— as he calls them — continue the social aspects of his previous work by revealing new stories of life and love, layered with experiences and dreams, piece by piece, item by item, that connect him to the individual.

Using the circular form for his sculptures, as he often does, Lin likens his creations to engagement rings or wedding bands and everything they imply. “From birth to death, our whole lives, the whole era, is a golden age. Not a traditional “Golden Age” like a short, special period of time but, like a moon, like the earth, one in which there is no end to the circle. It starts, it’s a circle, there is reincarnation, it is forever.” He called his mother “the original circle” for him. “For two thousand years we’ve been living in a circle. Art is a circle. The art has changed but the circle has not changed.”

Lin worked with sumi ink beginning in Taiwan. Eventually he added water color, oil painting and also Japanese painting to his work. “My art mixed everything together,” he said.

Following a two year stint in the Taiwan military which he chose as a young man over college, Lin changed his mind and moved to Japan to study art. “My major was sumi ink. I was looking for something. I wanted to go outside Taiwan. Japan was a democracy and so was Taiwan. They are a little bit similar. They share history. I like Japanese culture and now I speak Japanese at home. My wife is Japanese. My family speaks Japanese when we talk at home.”

Lin was at Lincoln Center looking at the the fountain when he saw a kid throw a penny in to make a wish. “At first I want to make a big fountain and make a big wish for peace,” he remembered. “A war was on in the Middle East.” He had a desire to attract attention to human suffering, to issues like war and other conflicts between countries. But then his conception of a metaphorical peace campaign came to life, a blending of east and west.

Struck by the way Americans treated money, especially by the way the lowly penny was dropped on the ground and never picked up, Lin vowed to collect a million pennies totaling 10 thousand dollars. “Peace and love was the goal. ‘Do you have a penny?’ I asked people. Five months later, encouraged by others, the ‘penny party’ was invented. Then, 30 more penny party gatherings in Washington DC, New Jersey and Connecticuit took place, each bringing in 30 or 40 thousand pennies. Local TV station NY One began a “Please donate a penny a penny for peace” campaign and featured Lin on their “NY One Minute,” creating a “Penny Hotline” that was also picked up by the New York Daily News and other media. Over a million pennies later, the work he created with it was almost acquired by the United Nation’s permanent collection who heard about his work in progress.

When he was about halfway to his goal and enjoying the media attention, with a half-million pennies in a studio warehouse in Brooklyn, Lin’s Taiwanese passport, which he was not interested in relinquishing, would prove too controversial for the mainland China government at the UN who would not play along when the other countries were happy to ask Lin to donate his project for posterity. “It was an American project, not Chinese, after all” he said in retrospect. “Lincoln’s face is on the penny and he’s an American.” Lin kept his Taiwanese passport and continued working. 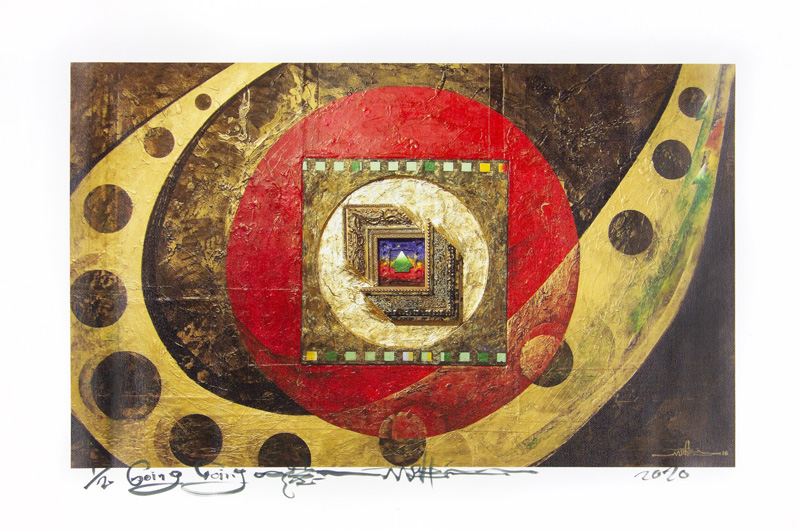 His finished sculpture did eventually travel to Taipei City Hall in his homeland and now is permanently displayed at Hiroshima University in Japan, having led to his international reputation as the "Penny Artist.” “It was good to send peace to Hiroshima from the USA” Lin told me, “70 years after a bomb was dropped on Hiroshima, here is peace and love, a monument, a symbol of a million wishes for peace.”

Today, Lin is sharing his Golden Age works created during an ongoing residency at the Crystal Window & Door Systems corporation which makes vinyl and aluminum window and door products in a state-of-the-art manufacturing plant near the Whitestone Bridge in Flushing, Queens. The company’s owner, Thomas Chen, is well-known locally for his corporate philanthropy efforts to foster education and advance art and culture. A large international collection of artists have benefited from Chen’s generosity in the form of scholarship funds as well as the Crystal Foundation and Park, a  200-acre private nature retreat, 65 miles north of New York City, an environment for the display of a permanent site-specific art collection where Lin’s works have been shown.

Lin Shih Pao, Memory of the Golden Age, Mixed media, 42x42 in. Courtesy of the artist.

Twenty years ago when Lin wanted to make art and needed support, a friend introduced him to Thomas Chen. “We share the same home town in Taiwan and have become friends over 20 years.” Lin and Chen both come from Pingtung City in the southern part of Taiwan. Today Lin remains one of Chen’s favorite artists.

“I want to make things, to say something, to share feelings, to include people, to make peace,” Lin explains, “but not with talking. I want the art to speak to everybody but not from my mouth. My job is just to make art.”

When I asked Lin how the paintings in his studio or the machines in the Chen’s window factory where Lin works relate to his concept of the golden age, he said, “It begins with yin and yang, the universe’s origins that set in motion the evolutionary process of society, nature, life. I see a little beginning. A poem, a painting. A small painting becomes a bigger painting then it becomes a sculpture. The Golden Age works began as a painting.”

His Golden Age works are a crystallization of love, materialized seemingly out of nowhere into the preciousness of an engagement ring, that symbol of a cherished moment that lasts forever.“A long time ago when I first came to New York, a businessman friend of mine invited me to a Yankees game where I met Nomo Hideo, the pitcher (and first Japanese player to become a major leaguer in the United States). I  still remember the excitement of 30,000 fans gathered in Yankee Stadium with their energy ready to be released. I thought ‘Never give up when you have a dream and hope to make a dream come true.’ I remembered that when I later did a sculpture with 25,000 baseballs to create a tree in Missouri.”

Lin Shih Pao and The Promise of Ring A, Photo by Joseph Hsu. Courtesy of the artist.

Lin Shih Pao will exhibit at Artexpo from the 7th to the 10 of April in Booth 205 at Pier 36 down on South Street, curated by the accomplished New York independent curator Kyoko Sato, curator of Ancient Queens and Goddesses at the Tokyo Metropolitan Museum and The Kobe City Museum in Japan and the historical exhibition A Colossal World at WhiteBox in 2018, which featured the works of 55 expatriate Japanese artists, including Yasuo Kuniyoshi, Yayoi Kusama, Yoko Ono, and Shigeko Kubota. Sato and Lin worked with Kate Chang, Assistant Curator at Crystal Foundation and Park.

“Lin is collecting each person's history and love. Fragments of people's experiences and of their emotions and combining it into one work. And his work is quite big. It is all about peace,” Sato said. “With war raging in Ukraine, people who love peace should come and see this show.” WM

Mark Bloch is a writer, performer, videographer and multi-media artist living in Manhattan. In 1978, this native Ohioan founded the Post(al) Art Network a.k.a. PAN. NYU's Downtown Collection now houses an archive of many of Bloch's papers including a vast collection of mail art and related ephemera. For three decades Bloch has done performance art in the USA and internationally. In addition to his work as a writer and fine artist, he has also worked as a graphic designer for ABCNews.com, The New York Times, Rolling Stone and elsewhere. He can be reached at bloch.mark@gmail.com and PO Box 1500 NYC 10009.