The first of these two stellar watercolour exhibitions was mounted at Galeries Bellemare Lambert and featured the work of Michael Merrill, with single works by Fritz Brandtner and Goodridge Roberts (two deceased Canadian masters), two glorious works by Henri Michaux and five hauntingly ethereal and luminous works by Roger Bellemare from the 1990s. 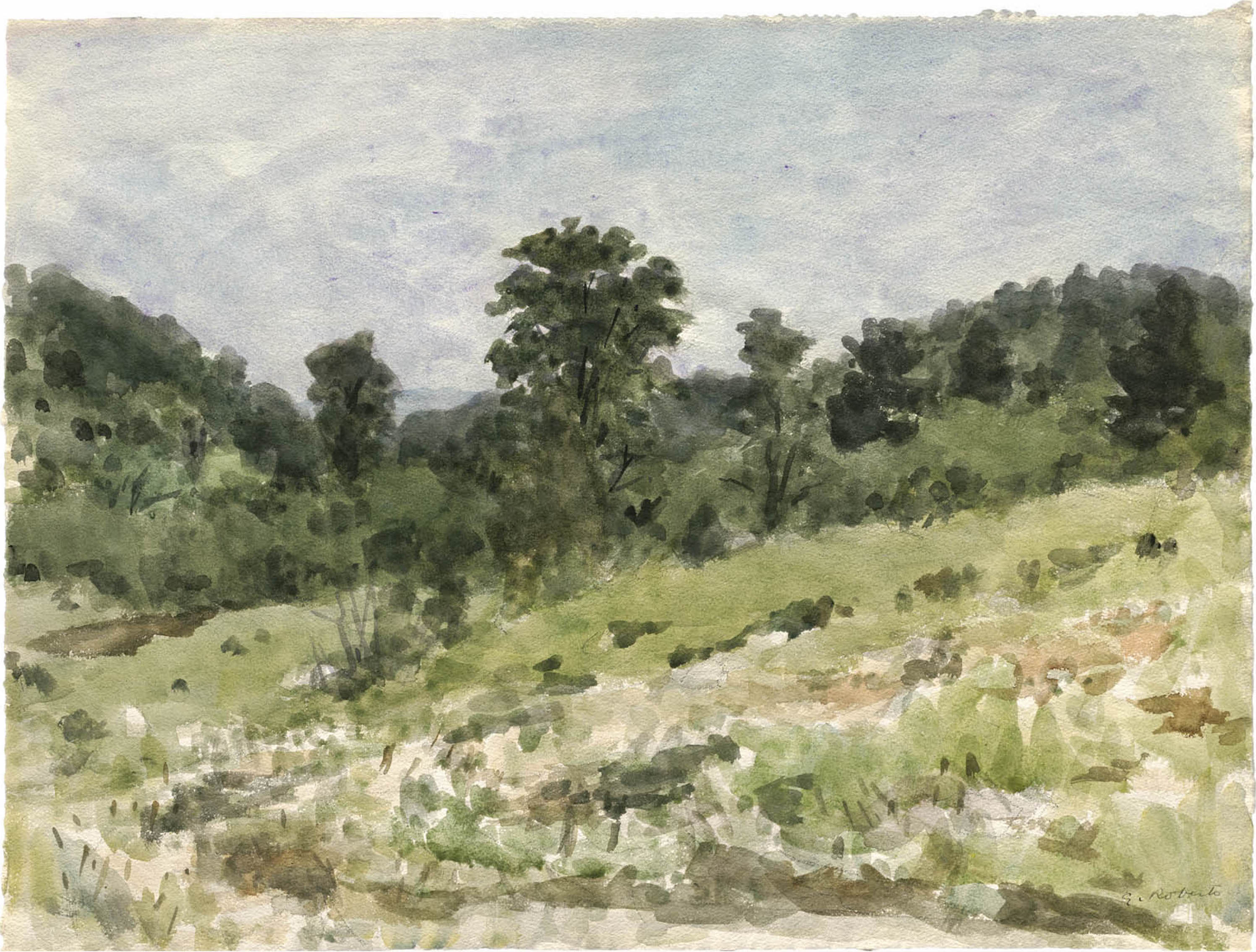 The Brandtner and Roberts’ watercolours added a solemn, if uplifting, historical note to the proceedings. Both artists executed scores of marvellous watercolours in their lifetimes. Michaux’s work added further historical depth and, let’s face it, the two works exhibited here are both drop-dead gorgeous examples extracted from the inventory of the Gallery. Michaux was both a brilliant poet and a self-taught painter. Working with or without drugs, he executed watercolours and works on paper that are stunning and visionary. His early acquaintance with Paul Klee, Max Ernst, and Giorgio de Chirico led him to execute his first painting and drawing. He kept painting right up to his death in Paris in 1984 at the age of 85. 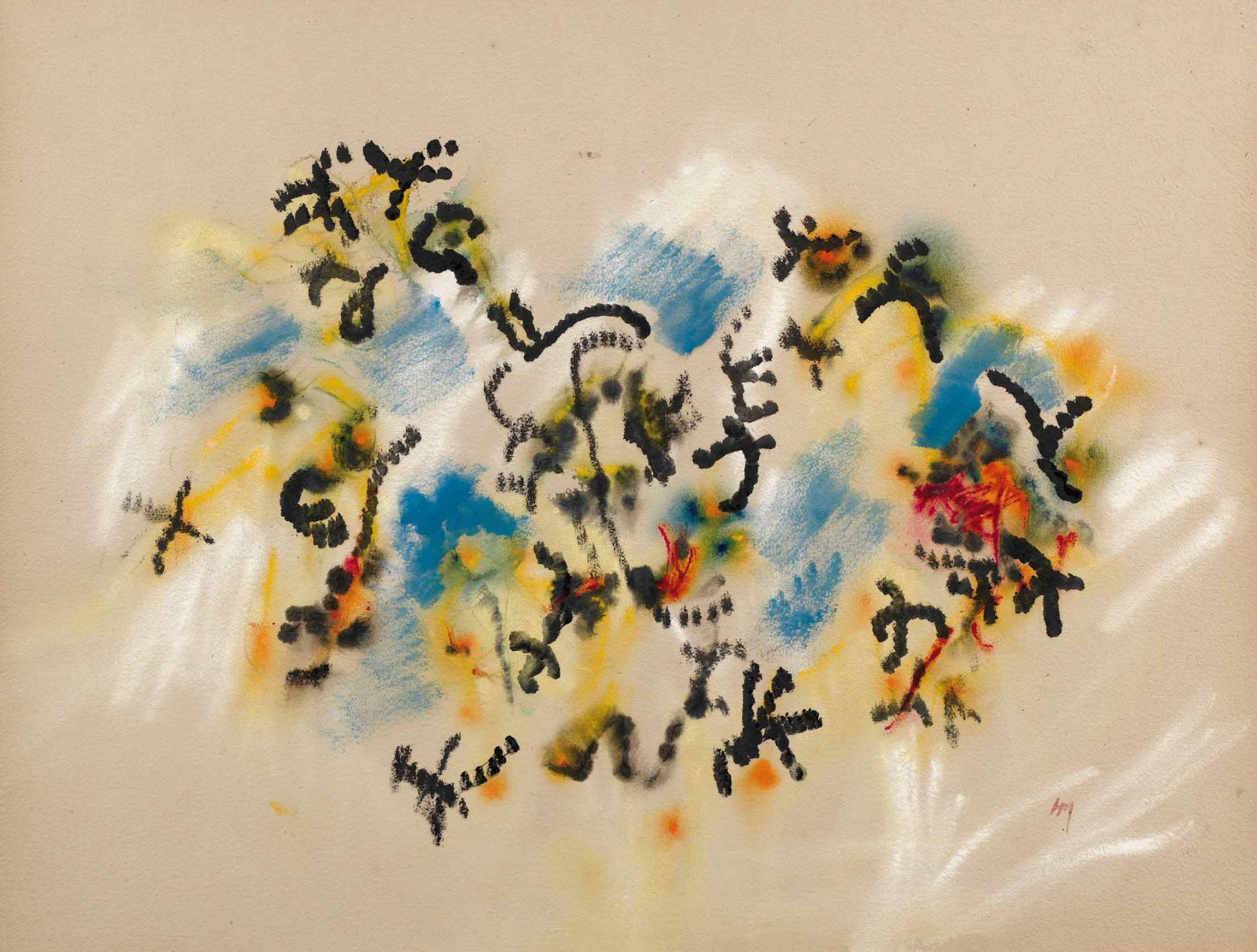 Merrill’s work, which I reviewed previously for this publication, must count amongst the finest and most radical watercolour endeavours being executed anywhere today. (He is also a painter and sculptor of grand consequence). The works in the show derive from several different groups and periods: the larger pair was executed on the occasion of visits to Neolithic cave paintings in the Dordogne region of southwestern France. Others come from his road trip surveying works of American land art in the American southwest. Still others (with a lovely and liminal memory of David Milne) were made in rural Quebec.

I interviewed Merrill for this writing. He related his experiences with the medium and made some interesting observations. It’s worth quoting him at length:

“Having tried off and on for years to do watercolour, I would become discouraged and put it away for a while only to come back to it and fail again. Initial attempts were always overworked. Working with ink was a solution to this impasse. Eliminating colour allowed me to move forward, working wet in wet. I became aware that the paper was not a passive surface that accepts the will of the artist as it is with opaque mediums, gouache, acrylic, etc. It is primary and alive.

“The initial watercolours, wet in wet, function very much like dreams. I became so entranced that I would dream all night of working and wake up aching to get back to the studio. The image and the watercolour come together and drift apart. There is no preliminary drawing. The paper is soaked and the loaded brush touches the paper and the ink blooms. The paper moves creating pockets that hold puddles of water, as they dry they create an overlay of halos and marks that are independent of the image. Everything is in flux. A part that has been painted in has now disappeared leaving only a ghost. This is anarchy! The images emerge from the process. As the work dries other possibilities become available.

“Later I experienced a torn retina and my vision became very much like these wet in wet works. Flashes and floaters made one acutely aware of the eye as the mediator of vision between the self and the world. Perception is fragile. 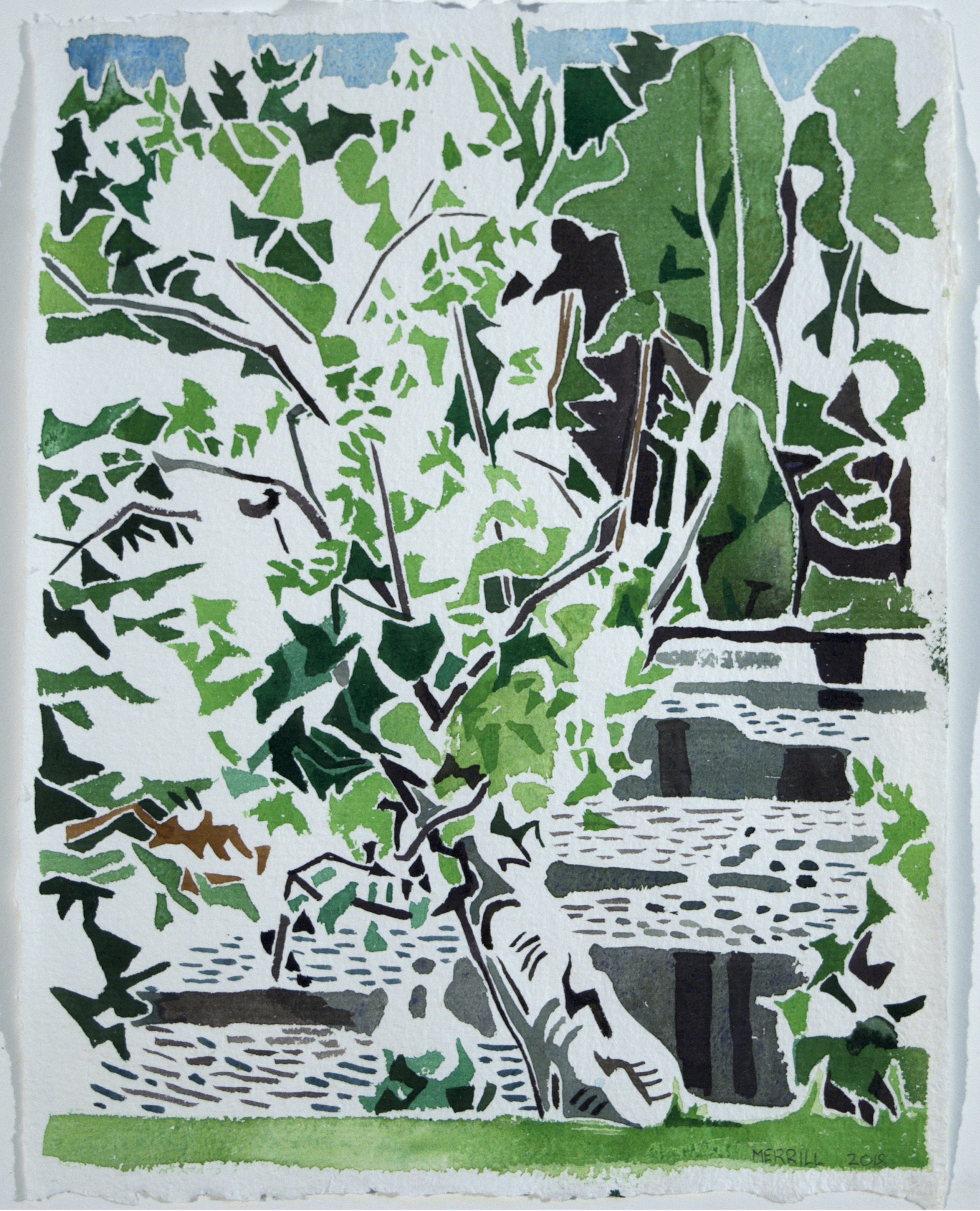 “At each Land art site in the U.S. I made a drawing a watercolour and a small oil painting. Trying to represent this experience with realism is futile. It is necessary to work fast and economically as the conditions are hostile: heat, wind, etc.  Working like this, mastery disappears and one is left to invent a new language on the spot. The work is finished when the time runs out as opposed to the studio where time is endless. It takes a while to accept these. They are raw and ugly, but contain energy. I am hooked.

“Entering the cave formations in France, the flashlight or torch creates roiling shadows that that are continually suggesting images, a fountain of creation. Henri Michaux and Picasso as well as others come to mind with images that spring from the moment.

“Now less has become more. The “cottage” paintings in the country are about activating the white unpainted parts of the image. Rather than lying under the paint, they interlock with the shapes and enter the conversation. The watercolour is applied to dry paper. The paper is only touched with intention. Each mark answers the previous one. There is no forgiveness. It is a tightrope walk: the marks accumulate, bugs are out, rain starts, the light is gone, a watercolour is done.”

Last but by no means least in the pantheon here are the watercolours of Roger Bellemare, an artist who confesses to having the “soul of an opportunist” but who really possesses the spirit of a magician and wily Ninja-like savant. His watercolours here are innately seductive, the palette ravishing in its sensuosity and the subject -- the circus? – are informed by a barely perceptible but gentlemanly nod to Paul Klee. The works belong to a group counting no more than twelve in number. Each of those exhibited here is memorable, darkly lustrous, pristine.

This exemplary exhibition had a complement in another one held across town at the McClure Gallery. Given his stature as a watercolourist of the first rank, it is no surprise that the McClure, which is part of the Visual Arts Centre in Montreal where he teaches, asked Merrill to curate a show of watercolours. The artworks he chose for this exhibition feature diverse and sometimes divergent, perhaps even heretical, ways of working with watercolour, as some fall just beyond the limits of what traditionally defines the medium, hence the quotation marks around the title of this show. 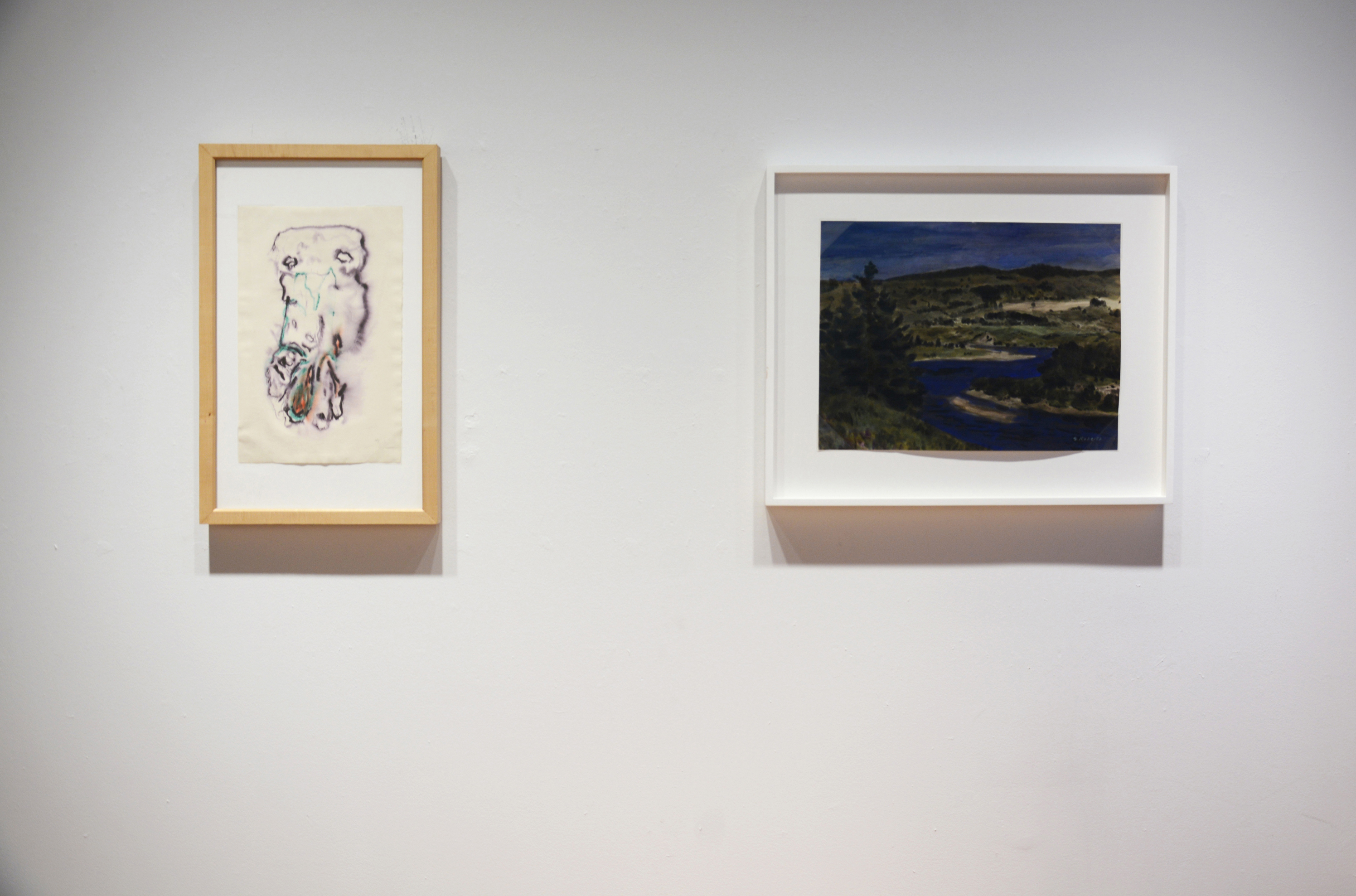 This exhibition revolves around two works by deceased artists, one by Henri Michaux (who approached the medium from what the curator refers to as an “interior vision”, and one by Goodridge Roberts, an “exterior vision”.). These are different works from those in the Galeries Bellemare Lambert exhibition, but no less radiant. A standout largish watercolour by Merrill himself is a further point of fulcrum that hangs just above the reception desk.

Merrill, who reveres Michaux as though he was an art god says, “Michaux refused to paint an existing thing, and Roberts painted only that which exists; Michaux conjured visions out of material reactions, while Roberts interpreted reality, en plein air.”

The other (living) artists in the show are situated in various relational nodes to these ideas. 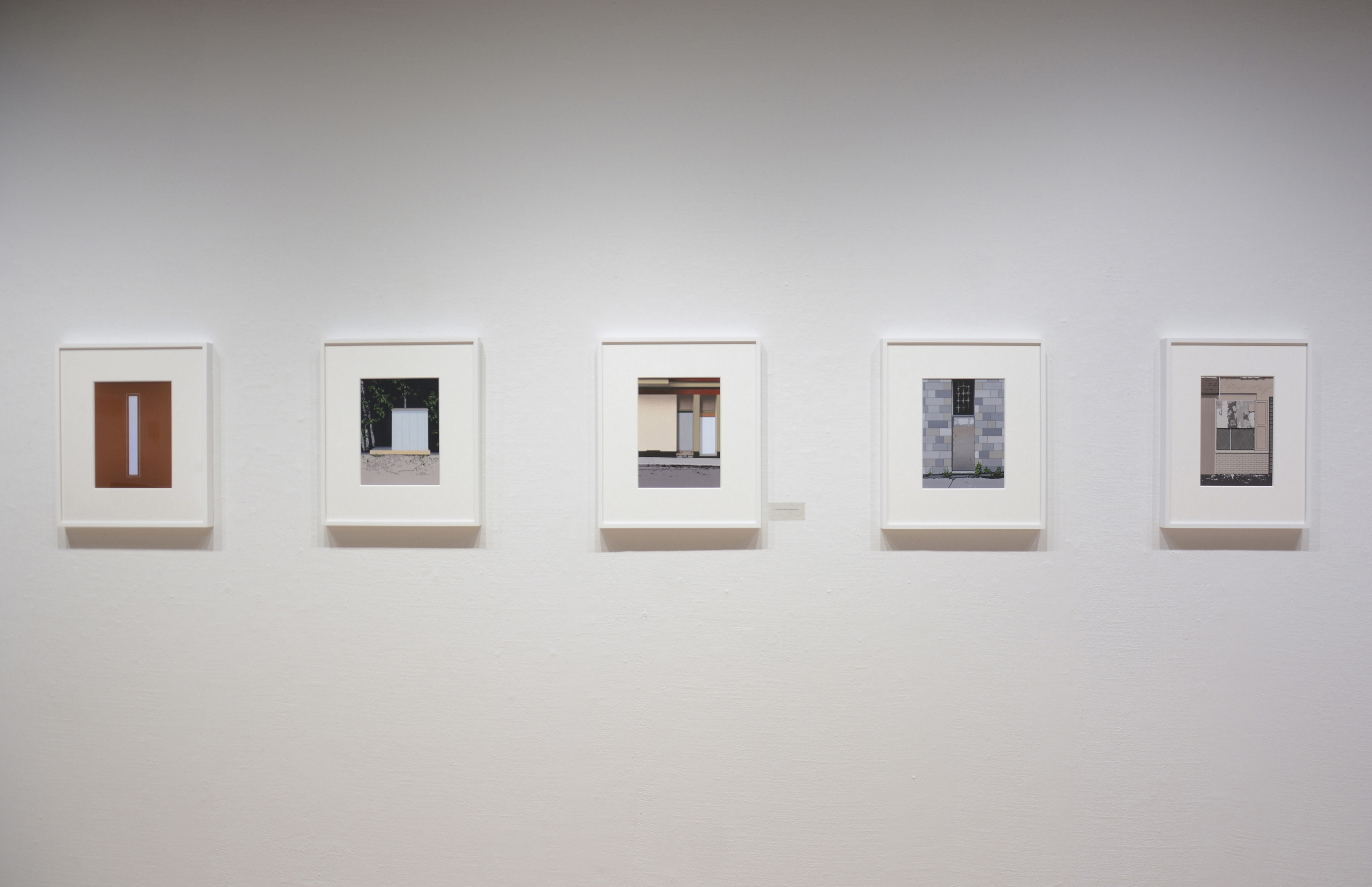 Pierre Dorion’s watercolours demonstrate the same maniacal grace and angelic devotion as his paintings do. Indeed, his long wall of watercolours here convinces us once again that he is one of the most important artists working in Canada. His survey at the Musee d’art contemporain here a few years ago was a real showstopper. He says: “Due to its rapid drying, the watercolour technique allows me to work with more complex and eccentric images than those used to make my oil paintings. A succession of relatively opaque layers gives these watercolours the appearance of gouaches. In these works on paper we find the same motifs as in my paintings: architectural spaces seen from the front, fragments of buildings and sometimes objects.” As rigorously formal as all his work, the watercolours generate a mood of auratic mystery that reminds one of metaphysical painting. 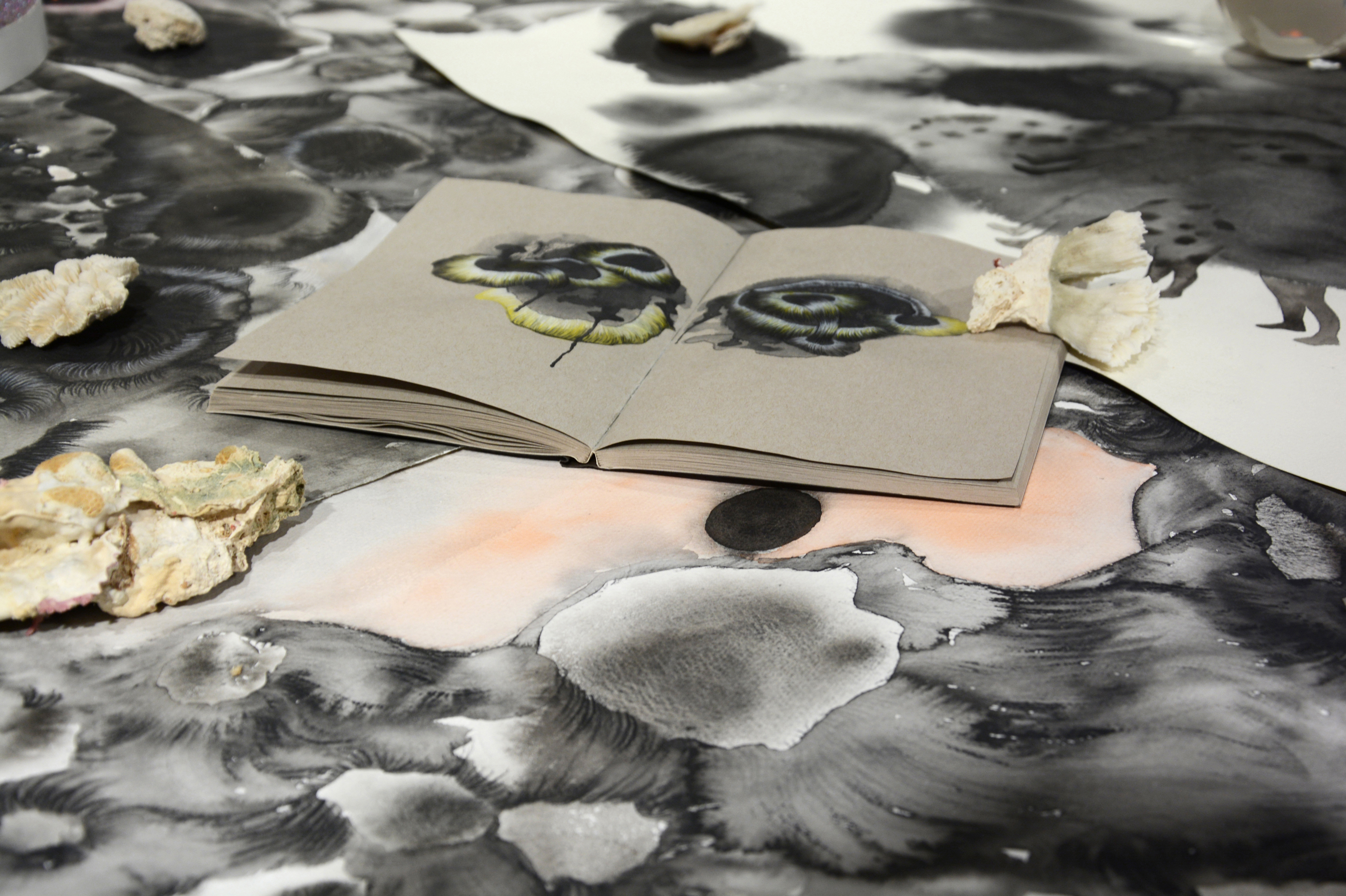 Catherine Bolduc conjures new cosmologies out of ink and watercolour.  The place of watercolour in her practice was initially utilitarian; it was a question of making preparatory sketches for sculptures. But eventually, she says, watercolour came to occupy an increasingly prominent place in her practice. “By freeing myself from certain constraints specific to sculptural practice, watercolour allows me to plunge into a fantasy space made of transparency and random lines: a space without gravity.” 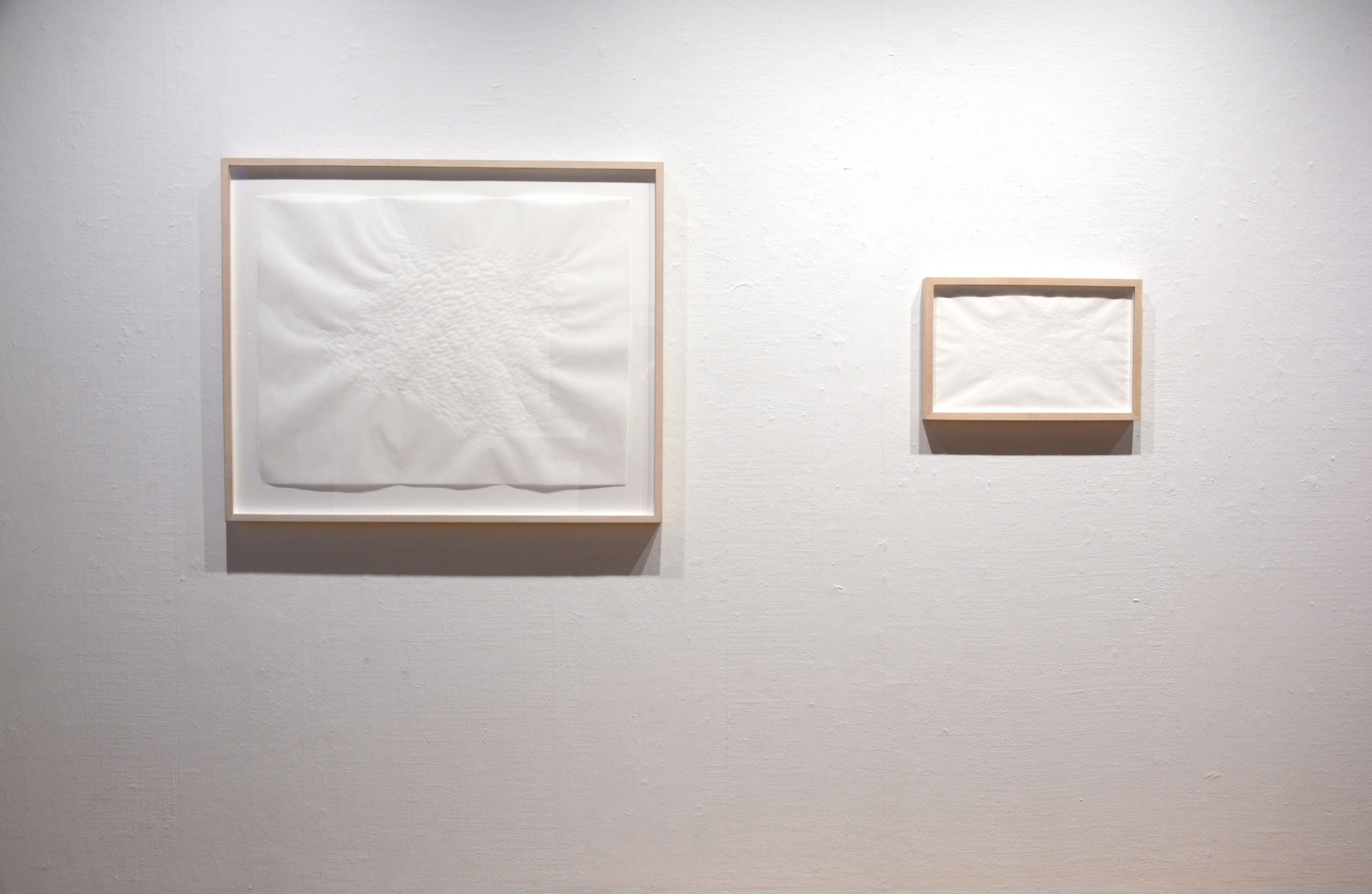 Karilee Fuglem’s aptly titled Water Drawings (2000-2002) are circles drawn onto vellum with a brush dipped in water, briefly visible before evaporating into the void. Until the damp paper outlines dry, they are invisible. Technically speaking, they are not watercolours per se. These are early versions of an ongoing body of work the artist calls Invisible Drawings for the way their lines disappear while making or viewing them. The interweaving patterns are consummately subtle and suggestive in their mien. They draw out our thoughts out like taut fishing lines barely perceptible under the surface of still water.

Matt Shane and Jim Holyoak, who often collaborate, employ ink and watercolour to experiment with the evocation of contemporary landscapes. Shane dilates on urban vistas in black and white, while Holyoak repairs into nature’s ambit, combining plein air drawing with aspects of Asian ink painting, leaving the process open to accident and incident. In 2001, both artists travelled to Yangshuo County, China, where they met the master nocturne ink-painter, Shen Ling Xiang, who would subsequently influence their work.

Yves Tessier creates dream-like worlds that enjoy a hallucinatory hyper-clarity, drawing upon images scavenged from life, film, found images, and pure fantasy.  He says of the splendid and representative wall of works exhibited here: “At the time, between 1992-94, I was painting on wood panels with egg tempera on gesso, a very slow monastic process. But before I began a journey on such a panel, I needed to make quick studies in colour, something to keep my ideas flowing on, so I turned to paper and the fastest colour medium there is, watercolour, the "polaroid" of painting.” 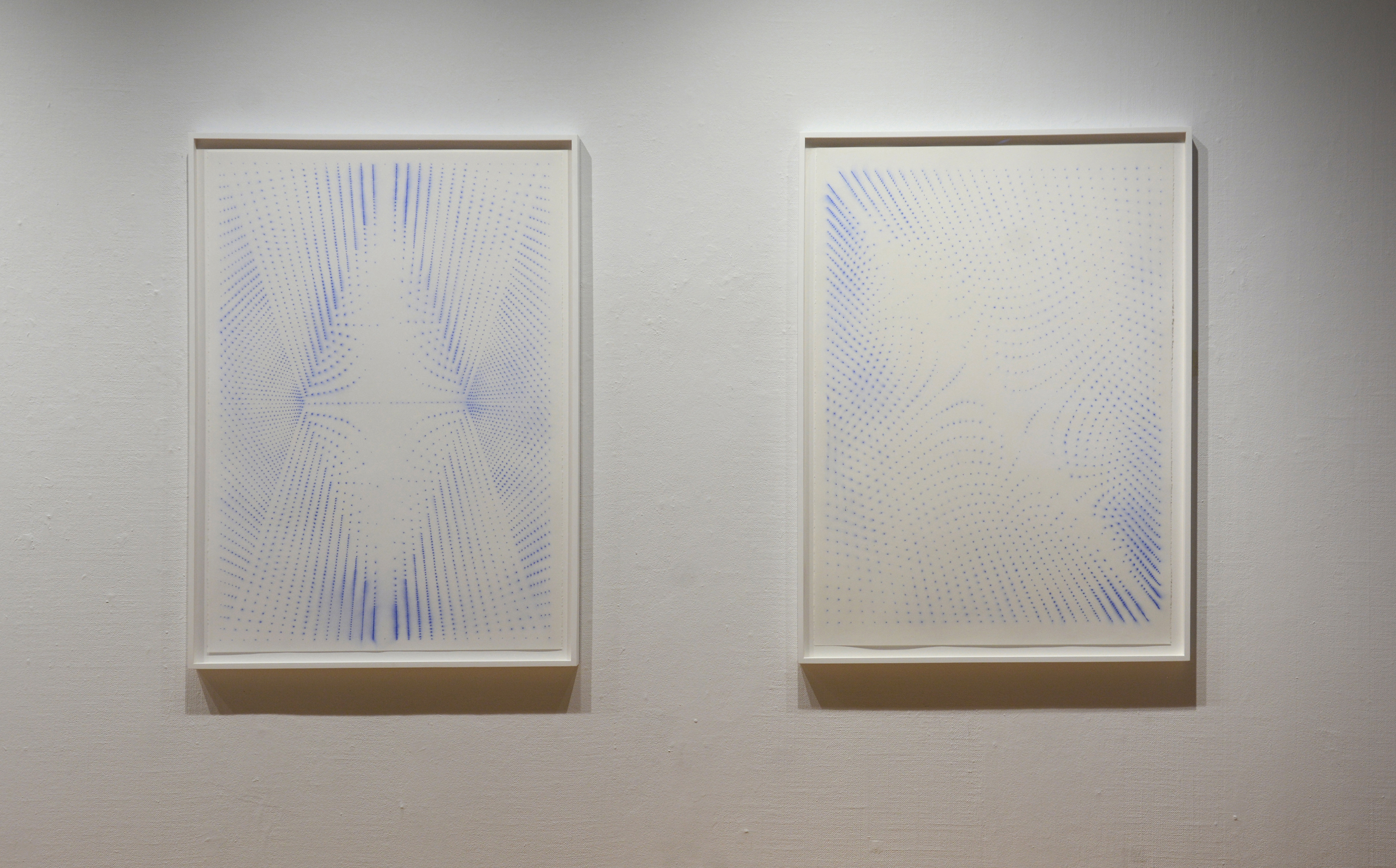 Marie-Claire Blais traces phenomenally delicate optical patterns with pigment. This painter, undoubtedly one of the finest and most experimental currently working here in Quebec, is a gifted savant. While technically not watercolours per se, her works on paper here are true chameleons, and qualify as being watercolours by any other name, like the Fuglems. Their penumbrae of slightly saturated dots dance across the surface of the paper – and the viewer’s rapt optic -- like light Spring rainfall.

Sky Glabush, a born maverick, reinvents himself with each new work. He says of the works exhibited here: “Due to its spontaneity, its fluidity, and its rather unforgiving nature, watercolour is a perfect medium for capturing the initial germ of an idea. When I use watercolour I try to work fast. If it does not work in the first attempt I often take the paper over to the sink and run it under the tap to remove as much of the image as possible. For me painting a watercolour is akin to writing a poem whereas working on a large oil painting is more like writing a story.”

Whatever their respective pictorial methodologies and philosophies, the reality, or should I say the magic, the otherworldly legerdemain, if you will, of watercolour lies in the reality of the constituent materials themselves – a combination of pigment, gum arabic, water, soot, glue, and paper. When the paper is saturated with water and the paint is following its nature, the balance of intention and accident is exalting. Always, the medium is the message, and it is a proverbial double play: the sheer virtuosity required to make it work and not fail or fall short and the energised optic and hand that enable the transmission -- in a watery forever medium -- of all that is in mind to say. WM