The Paul Pfeiffer videos recently on view at World Class Boxing in Miami, represent a mix of an athletic theme and artistic endeavor that is perhaps as rare in our time as it was typical in Humanist Hellenic culture where athletic achievement and concern for the beauty and potential of the human body were seen as parallel to each other, and again in the Renaissance where the human body once again became a measure of all things considered beautiful.

Cultural cross-over can be insightful for both sides, and in contemporary sport and art there isn’t much mixing and mingling nowadays. So it is interesting to see an investigative contemporary artist apply the rigor of sport and achievement as a stating point for these dynamic high-tech videos. In his images, Pfeiffer uses footage found, expropriated or provided by sports teams as a basis that is really as much about human achievement in the realm of sport as it is about the technologies that have allowed us to follow high speed sports on TV ( through the use of several cameras and angles at once), and also the digital photoshopping current technology allows (for those trained to use it). And because Pfeiffer appropriates and transforms cultural material we’re accustomed to, his videos are punctual cultural examinations too.

The fast-paced images are really abstracted versions of what we might have seen on TV if we’d been watching: athletes like basketball players, and in one case a hockey trophy, move and writhe about the video frame; we can tell when they go in for the basket even if we don t see the ball, or just see their heads spin and turn; it’s as if some adroit Mannerist artist from the late Renaissance had been given a video joystick to focus on the twists and foreshortened glances at a figure so that the complexity and perversity of their movements had finally been fully revealed.

The work clearly connects to the humanist idea of achievement and potential but since, in most cases, opposing teammates have been removed from the video, our protagonist seems to be competing against himself, or writhing and struggling with some personal goal in mind. The result is human potential/achievement on steroids. And with the single-minded camera work, the video seems to be more a frenetically obsessive, mindless competition than an elegy to potential and achievement.

Part of the appeal of this work has to be paradoxical juxtaposition of the romantic struggling, individual, with a representation of modern life as a frenetic battle to achieve goals ( like putting a ball through a hoop, or winning a trophy) who’s value may seem as dubious to some of us, as it is meaningful to others.

So while the removal of the antagonists suggests that terrifying spiritual question about whether anything people try so hard to do is really worth it, the ‘wired’ effect of the doctored video becomes an apt metaphor for the ‘doctored’ ethical climate of our hyped sports, business (and therefore Arts) environments, where doctored information, retouched images, and (as is so literally typical in Pfeiffer’s videos) ’spin’ are so evident.

The pace of Pfeiffer’s videos appears to be accelerated by deletion of segments leaving jump cuts from action to action. As is generally true with the process of abstraction/removal, the result is an enhanced version of the action taking place. The process of abstraction/reduction in these images is an interesting exercise in the context of the reductivist tendency that dominated Western aesthetic research through most of the 20th century: In this case the frame-by-frame reduction, and selective removal, of parts the digital footage becomes a kind of reverse drawing that seems appropriate in a culture that probably has far more visual information than it needs or really wants. So re-cycling some of it into a genuinely investigative art practice is an interesting way to apply some of our formidable technology to transforming a part of our cultural detritus into new aesthetic information.

Although it s not clear how many sports enthusiasts have seen Pfeiffer’s videos, its application to Contemporary Art has found a wide audience internationally. 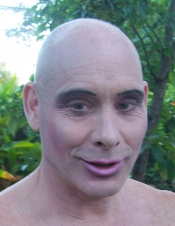 David Rohn grew up in the suburbs of New York, the city in which he lived during most of the ’70’s and ’80’s. After studying Architecture, Art and Urbanism at NYU, the Ecole des Beaux Arts, and Pratt Institute, he moved to Miami where in 1995 he began to exhibit paintings, videos, installations, and performances. Currently associated with Carol Jazzar Contemporary Art, Miami, his work has reached museums and collections both public and private. David Rohn has contributed art reviews to Art Press (Paris), The Sun Post (Miami), Art Papers (Atlanta), and TWN (Miami-now defunct), and online publications TuMiami, MAEX and ARTLURKER. For more information please visit: www.davidrohn.net