Presented at VITRINE, Guy Patton's first solo exhibition explored his rigorous appreciation of paint as his medium, embracing spontaneity, process and collisions of colour through a series of large-scale acrylic paintings. Working on paintings simultaneously, the works inform one another, deliberately and decisively transferred from one to the other, bearing the imprints of this process. Chris Bayley (Curator and Writer) interviews Guy Patton about this body of work and his 2015 exhibition at VITRINE, Bermondsey Street, London, SE1 3UW.

Chris Bayley: I’d like to start with asking how your work progressed into abstraction?

Guy Patton: I have always been interested in the materiality of paint and wanted to push and challenge the methods by which paint is applied. In the past I would find myself constructing a narrative through figuration to manipulate paint in unorthodox ways. After a while the figurative element became unnecessary and too attached to things I never really cared or believed in. I found myself constantly changing, never really sticking to one set way and being unsatisfied with each painting because I had no control over subject matter. It was a very gradual process, to make entirely abstract work. It took time to remove this reliance on a given physical recognizable element. I was always hesitant to remove this not believing I could make an abstract painting without such crutches. The structure way I used to begin a painting (using a pre-existing image found from a magazine or the internet) began to change. I started to really push the emphasis on the paint, colour, pattern and form; and so a process began to develop using all the different tools I had learned. And so I began to work with new rules.

CB: All the works at Vitrine were the same dimension, large 180x120cm canvases in the space. Do you work in other dimensions? And how important is scale in your work?

GP: Before I started working on this large scale, I was working on a much more manageable and contained size (50 x 40 cm). I was very hesitant to work on a large scale for different reasons but mainly because I liked the way I could be non-precious about the work at this stage and get quick results. I would start with 30 or 40 canvases all in this small scale and work through a process and to find an identity in the painting. Experimenting with the paint and other formal issues was all I cared about. After a prolonged period of working at this scale and feeling more and more confident in the processes and mediums I worked in I took the work to a larger scale. The larger scale canvases gave me a freedom to be more expressive, where the volume of the gesture had more presence. Abstract painting holds you more at a large scale.

CB: I’m interested in the way your paintings create themselves from a nexus of chaotic and calculated movements. I noticed around the edges of some of your works you are able to see the marks and traces of paint, which suggest each paintings history and your process; others are less evident; can you tell me a little more about this process and why you decide to reveal or mask it?

GP: The most successful paintings in the show, I think, are those where I have been more calculated and have planned the painting in advance. When I say planned I mean it in the vaguest possible way - I never really know how a painting will look from beginning to end. I could say I know a certain amount about how the paint will react but the element of chance is very important to me. What keeps things interesting for me is when a new development could happen by accident. The visible layers of paint on the surface are important in revealing its history but deciding to tape the edges it not important, sometimes I do sometimes I don’t - I am not trying to hide anything, apart from dirty finger prints!

CB: Your work has been exhibited in-group shows in the past, but this is your first solo show of a full body of work. How important was it to have a solo exhibition of these particular works in a series like this at VITRINE?

GP: I think it was a good time to show the works as a whole. It consolidates my studio practice and works I had been making over the past year.

CB: Can you tell me a little more about your process of how each painting informs one another, particularly your use of rudimentary printing.

GP: As I mentioned earlier the element of chance in my work is fundamental and the accidents that happen can’t be rehearsed. I might come across something in one painting that I can use in another and so they all each feed and inform one another. That’s why I try to work on a group of paintings all at one time, to keep them evolving together. I started using print techniques in an attempt to make my paintings more mechanical and to distil the artist’s hand. With my earlier works I was using a process of directly printing one canvas onto another. This was quite a straightforward process unlike the new cyanotype works where there is still a lot to learn and the results are much more unpredictable – which is exciting.

CB: All of your works in this exhibition are untitled, even the show is untitled, can you explain about your reasons behind this?

GP: Titles always add another layer to the work – with this body of work I wanted to allow the pieces to speak for themselves and not overcomplicate them with additional references. The same goes for the show.

CB: Finally, what’s coming up next for you?

GP: I have a group show planned for early next year in New York which will be my first there which is exciting and I am in discussion about another show later in the year in London around Frieze. WM 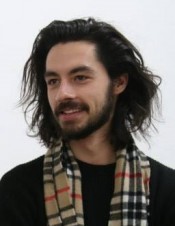 Chris Bayley (b.1991) is a Curator, Writer and Artist currently living in London who studied his BA in Illustration and his MA in Museum and Gallery Studies, Curatorial Pathway. Much of his research focuses on discursivity, art discourse and the educational turn, with a particular focus on supplementary formats as a tool for thinking about exhibition making such as the catalogue, the interview and the event as demonstrated within 'The Day Job' (Hoxton Basement, 2014); an exhibition of Gallery Assistants employed at Serpentine Galleries, London.