The nom de plume—or more appropriately, nom de guerre—of artist Pat Riot already gives you a good picture of the ethos of the artist before you even see his work: playful, ironic, and always ready to rumble. Indeed, no matter which of his multimedia oeuvre you consider—paintings, collage, sculpture, image manipulation—Pat Riot is in your face and unapologetic about it, combining his firebrand political sensibility with a keen visual flair. His work centers on critiques of mass media, politics, aesthetics, and commercialism, to name but a few ten-dollar words, with a specific focus on the very myths that make up and sustain the idea of United States. Powered by a “tolerable amount” of THC and quoting Shakespeare and Guy Debord, Pat Riot is perfectly poised as an artist both predating and belonging to our current turbulent political times. As he puts it succinctly: “I am a benumbed rebound of the absurd and inconsonant mythology of the modern American man.”

Riot’s style is less notable for any idiosyncratic formal qualities than for the direct and unforgiving themes he conveys, as well as his creative approach to getting those messages across. Borrowing from visual lexicons as varied as surrealism, Pop Art, and comic books, Riot has used the aforementioned more traditional forms of media to his ends: topsy-turvy collage to poke fun at the typical American suburban dream in works like This Unvoyageable Gulf Obscure; juxtapositions of violent text with appealing appropriated imagery to call out governmental hypocrisy like XTRA JUDICIAL KILLING. Yet it is Riot’s approach to the literal material qualities of his works that sets him apart from other artists both of his time and of his political milieu. His Bubblegum series of 2013 used literal bubblegum balls in Chuck Close-esque mosaic portraits of prominent African-American baseball players, while his Los Angeles Dargers cycle of 2010 made tribute to the late outsider artist Henry Darger, combined classic baseball cards with a war-correspondent narrative, and added in the blog itself as a medium for telling this particular story.

Says Riot of his Dargers series, “the idea for the blog was an attempt to create a parallel of the day-to-day work ethic of Darger […] I tried to write an entry after each of the 162 baseball games that the Los Angeles Dodgers played during the 2010 season, recapping each contest as though I were a war-correspondent following a fictional army, led by General Glory (Joe Torre), as they battled their way across the country […] As much as the project was a tribute to Henry Darger, it was also an endeavor to stay committed to a long-term narrative. Over the years, a lot of artists have mimicked his style, but I wanted to mimic his work ethic. The real-life Los Angeles Dodgers sucked that year, and it got really tiresome writing about each suffering loss, game after game. By the end of the season, I wasn’t even writing about the battles anymore.”

Baseball, of course, provides a perfect historical lens through which to examine the American mythos, as it is “America’s Pastime,” and has served both important diverting and political functions since its popularization in the nineteenth and twentieth centuries. After all, it was the then-Brooklyn Dodgers who signed Jackie Robinson, breaking the color barrier in Major League Baseball. Viewed through this lens, Riot’s Bubblegum works, which include a portrait of Robinson, functions as commentary on how Robinson’s very real struggles against racism and discrimination—often from his own teammates—became popcorn- and bubblegum-entertainment for the baseball-watching masses. Suffering becomes spectacle—and Riot would argue that this phenomenon is also a large part of the United States’ legacy as a whole.

Living in Los Angeles, the land of Hollywood and the entertainment industry, provides similar meaty fodder for Riot’s art. In particular, Riot condemns the “lifetime broadcast of discontinuous, mass-produced, narratives […] [the] millions of meaningless pronouncements and professionally produced images that have been incessantly woven into millions of empty, long-winded, brand-name, American myths.” Yet at the same time, Riot acknowledges the necessity of the Hollywood apparatus that makes his politically-charged art practice viable: despite the endless competition between the world of art and the “unremitting spectacle” of the entertainment industry, Riot admits that he’s “married to” this same industry, “[allowing him] some financial freedoms” which other artists can only dream of accessing. “However,” he emphasizes, “I’m in a constant state of biting the hand that feeds.”

The Internet Age has also been a tremendous time to work for Riot, who uses the internet both as a medium and in conjunction with his other works and projects. Riot’s project RPM—an acronym for Revolutions Par Minute—documents what Riot calls an “object mission,” wherein Riot placed and photographed plastic protester figurines around the city of Los Angeles; the overall project—blog, photographs, and figurines—is meant to combat what Riot refers to as the “practically non-existent anti-war movement in the United States during the last 16 years.” In general, Riot remarks, “the potential for mass-market communication, the immediacy of that communication, and the permanence of the World Wide Web are all appealing to me.” It’s almost a reverse case of biting the hand that feeds, then—using the internet, which was created by the government and is controlled largely by advertisers, to disseminate his radical messaging and art condemning the very institutions which have shaped the contemporary internet experience.

Pat Riot credits the events of—and ensuing worldwide responses to—9/11 as particularly formative in his artistic development, to the point where his own nickname is a reference to the controversial PATRIOT act. Says Riot: “my vision of the American future was already dim, but in the immediate years following September 11, 2001, I succumbed to the very bottom of the Internet, and wandered into a dark cavalcade of conspiracy and misinformation. In the burgeoning new world of social media, and data collection, it slowly became clear to me that a massive cultural and psychological shift was taking place. M.C. Escher said, ‘what I give form to in daylight is only one percent of what I have seen in darkness.’” Sixteen years later, in today’s era of fake news and alternative facts, Riot’s prophecy seems to have proven true. In every sense, then, Pat Riot’s pseudonym really is a nom de guerre—and he is ready to start that riot. WM 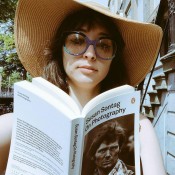