The Big Picture at the New York Academy of Art

The Big Picture at the New York Academy of Art, installation view

Filling the Space: The Big Picture at the New York Academy of Art

The New York Academy of Art is currently hosting a rare opportunity to see large-format paintings by a notable shortlist of contemporary painters: Vincent Desiderio, Eric Fischl, Neo Rauch, Jenny Saville and Mark Tansey. These painters have all confronted the problem of what to do with a disturbingly large picture plane, and each has found his or her own mode of filling the space. The theme of the show is not so much the largeness of the work itself, but the problem of filling the space. This is a fascinating dilemma. It tests the artist, not only as a technician and formalist, but as a visionary. Does the vision expand to fill the daunting space? Perhaps. No doubt the different pieces will have more, or less, to say to you personally, as they did me.

Let me just come right out and say that I don’t get Neo Rauch and Vincent Desiderio. Desiderio’s technique is dazzling, and Rauch’s is audaciously graphical. They are both clearly capable painters. They both meet the compositional challenge of the large image, Rauch with a Jan Steen-like messy interior in Hausmeister, and Desiderio with a spare geometric arrangement of seemingly unrelated elements in Quixote.

Rauch’s implanted and then carefully obscured texts seem emblematic to me of the meaning of his work overall. I cannot decipher it. It is bright, brassy, and blank. It pushes me out; I am never invited into his universe, and never gain access to it.

Desiderio’s paintings are dense with webs of reference. Like Quay brothers movies, the technically ambitious depictions of textured objects and spaces seem to serve as staging grounds for a presentation of ideas. If one sat and stared long enough, I think one might begin to deduce those ideas.

The same may well be true of Rauch, but while I am always haunted by the thought I have not yet read Desiderio closely enough, I find myself fleeing Rauch every time I see him.

To my eye, Jenny Saville’s work does not reproduce well. She produces hard-edged regions of paint. In much of her work, her dominant colors are light blue, pink, and especially pale yellows. These are punctuated by smaller, sharply defined passages of the same basic colors: dark blue, red, and ochre. Plus a few black touches.

What this means is that Saville’s hard-edged bright yellowish paintings interact with the human eye at its absolute highest resolution. In reproduction, therefore, her work suffers from the same flaw as the other medium with aggressively high resolution, HDTV: it looks kind of flat and insubstantial.

I thought that probably her work needed to be seen in person to be appreciated properly, because the actual body of the paint, and the enormous scale of the canvas, would tend to soften and round the impression of its purely graphical elements. And this was exactly correct. If you haven’t had a chance to study Saville in person, do consider dropping by the Academy to look at her Bleach.

That, Sir, Is Very Strange

Who doesn’t like to see something they have never seen before? Mark Tansey’s Coastline Measure appears at first to be a relatively bland depiction of surveyors at their work on a stormy, rocky coast. As an image, it fits into romantic realist depictions of heroic Man in confrontation with the majesty of Nature.

All of this, however, is baldfaced lies. If you stand with the painting a little longer, you will find that a central sphinx-like figure, embedded in seemingly haphazard stones, repeats at various scales, from the tiny to the immense, along a spiral of what looks like the logarithmic variety. The surveyor’s rope intersects the point of origin of the spiral.

Related tricks are hidden throughout the composition, so that its romantic naturalism turns out to be a bravura act of weight-lifting under the burden of an almost absurdly complicated formal scheme. Seeing these mathematical repetitions and self-similarities, we realize that the Coastline Measure of the title refers not only to the explicit event we are looking at, but also to the famous intro-to-fractals paradox of attempting to measure the length of the English coastline, which gets longer the smaller the units of measurement become.

What a totally weird and delightful thing to even think of making a picture of.

The Moment That Stretches

I’ve been wanting to see something, anything, from Eric Fischl’s Krefeld Project for a while now. This series of paintings depicts a couple interacting, or not interacting, in a house. A story, more or less, emerges from these paintings, which thus function something like enormous ends-in-themselves storyboards. The Big Picture includes Krefeld Project Living Room Scene 1.

Fischl is the most classically humanist of the group represented here. The surface area of his canvas is resolved into a recognizable and everyday domestic space, the events in it common and tiny. A naked middle-aged man takes a drink, one hand on his hip and a worried or grieving expression - or maybe no expression at all - on his mostly hidden face.

Scale does for him exactly what it does for the filmmakers he resembles - transcendentalists of the commonplace like Antonioni, Bergman, Cassavetes, and Hartley. These filmmakers characteristically allow the moment to stretch. That stretch, combined with the scale of the movie theater screen, allows the microscopic and the quotidian to stand transformed. In the minute peregrinations of the stretched and enlarged moment, we see the human soul itself, grappling for salvation from instant to instant.

In Fischl’s Krefeld Project, space takes on a lush and panoramic scale. The spatial depths depicted at these scales blow apart the instantaneous quality of the still frame, giving it the cinematic extension of a scene hovering around a moment of time. Fischl turns away from painting here: he has figured out how to use the large frame as a medium of drama, in the sense of film and theater. His work answers to the criteria of drama, and to my eye, meets them.

curated by Peter Drake and organized by Elizabeth Hobson

at the New York Academy of Art

free and open to the public from 2:00-8:00pm or by appointment; closed Wednesdays and holidays 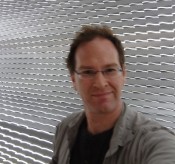