Michael Combs grew up on the north fork of Long Island among a family some fourteen generations deep in baymen, hunters and fishermen. When his Mayflower antecedents arrived in Massachusetts in the 1640s, they quickly decamped to Long Island and learned to work the land and sea, fishing in summer and duck-hunting in winter along the Great South Bay. But for Combs, gutting fish and fowl for the family business fell a bit flat and he defected, eventually, to art school. Nearly two decades later, his work is acclaimed for its keen narrative content, subversive conceptual twists and a degree of craftsmanship that is nothing short of astonishing. Trading on the machismo of his forebears  –  not just hunters but market-gunners, pirates and rum-runners  – Combs’ dreamy surrealism is fueled by memory, satire and a cultural inheritance that is rich in metaphor and the things found at the underbelly of our complex American heritage.

Selected by the Parrish Art Museum’s Curator of Special Projects, Andrea Grover for the third iteration of their summer series, Parrish Road Show, Combs was invited to create an off-site, site-specific work. His project, Outhouse 2014, on view at the Hallockville Museum Farm in Riverhead, New York through October 13th, is an ode to the origins of Combs’ artistry as it emerged in childhood. The sculpture rests along a swath of green farmland no more than 100 feet from the Combs Decoy Shop, circa 1876, where the artist’s father, Captain Jack Combs, can be found most days carving decoys and wildfowl figures.

Outhouse 2014 replicates the long wooden dock and a bare-bones latrine that served the Combs’ family bayhouse. Though few such houses remain along the Great South Bay, back in the day they numbered in the hundreds, dotting the shoreline between Fire Island and the mainland.  Erected on mud-sills or stilts, bayhouses rose above the soupy wetlands that hug Long Island’s south shore. They served as base camp for fishermen – and only men – whose work often took place in darkness or in the twilight hours before dawn. Without electricity or running water, the young Combs spent many a night in the rudiments of a pitch dark latrine, seeking refuge from a world he viewed with growing skepticism.

“I couldn’t find the realities of hunting,” Combs said during my recent visit to his Southold studio. “I could tell from an early age I wasn’t going to be a great Hemingway hunter - I hid in the outhouse, after all.”

The installation at Hallockville recreates the wooden slats, single pit and crescent moon outhouse porthole of Combs’ youth, sans the watery grasslands over which it hovered. The backdrop in Riverhead, one of the most bucolic on the east end, stretches northward across verdant fields and full trees toward the edge of the Long Island Sound.

With this backstory fully loaded, Outhouse 2014 is poignant in the extreme.  But, according to Combs, it is also a working model for a more elaborate sculpture titled Self-Portrait 2015, in which the outhouse and attached dock will be clad in mirror-finish stainless steel or anodized aluminum.  “I want it to be super polished – 100% reflective,” said Combs. As such, the work will be nearly invisible; embodying the metaphysical as it would all but disappear into the surrounding environment.

A fifth-generation carver, Combs began fashioning decoys from pieces of linden wood and cedar at age 12 or 13. He was buoyed by the numerous prizes he won in national competitions, but as his art developed he turned away from carving, resisting the family trade in an attempt to assume the respectful distance of an expatriate.  A skilled draftsman, in art school he pursued illustration, seeking the diaspora that might be offered by a life separate from his heritage.

While studying for his Masters at the School of Visual Arts in New York, he became an assistant to the artist Frank Moore, whose painting and related works mounted a fierce cultural and aesthetic throw-down that skewered everything from deforestation to genetic engineering to the AIDS crisis, which claimed his life in 2002. Moore’s focused surrealism and biting allegories touched a nerve in the American psyche, and in Combs. Eventually, like walking in darkness to the latrine, Combs began to find his way toward a deconstructed but highly finessed critique of his cultural inheritance.

In his oeuvre, Combs has explored both the sine qua non and the mythologies of his lineage through tromp l’oeil sculptures that address the predatory nature in humankind as well as the posturing it assumes in sexuality, masculinity and varied rites of passage. His trophy heads satirize “the hunt,” with deer mounts sheathed in tight neoprene, affecting an S&M vernacular that evokes Teddy-Roosevelt-meets-the-Marquis-de-Sade. Other works marry sympathy and savagery; the elongated neck of a swan dangles from a buttstock, the heart of a cormorant or its decapitated head lay dreamily on a napkin or pillow and sculpted helmets, vestments and hunting accoutrement are tinged with Combs’ incisive wit and exquisite touch. In 2005, Combs’ Trophy Room, an installation at the Parrish Art Museum, commuted the ultimate man-cave into another dimension where “killing for sport” collided with tenderness, rage, identity and the masculine mystique.

Where cold facts like resource depletion and species decline meet generations of duck trappers and commercial hunters and fishermen is where Combs points his compass. But he is no one’s apologist. Instead, the former Eagle Scout stands on an intellectual fault line that links swagger and stamina to vulnerability and self-awareness. Turning nostalgia on its head, where his forefathers plundered, Combs finds a redemptive, electric poetry. WM 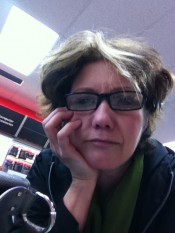 Janet Goleas is an artist, writer and independent curator. Her blog, Blinnk, is focused on contemporary art in and around New York City and the east end of Long Island.