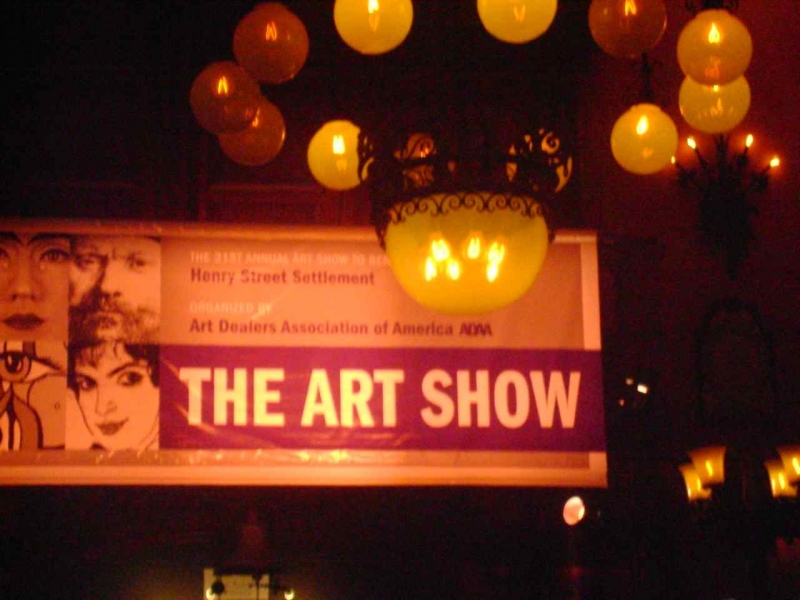 It’s Art Show mania time in New York City, starting with the the two biggest shows of the year the first, appropriately named The Art Show at the Armory at 67th Street and Park Avenue and then The Armory Show at pier 65 on the Hudson River. Kind of confusing, The Armory Show on the Pier, The Art Show at The Armory. The 1917 milestone show was actually at the Armory on 25th Street and Lexington Avenue. That show was a breakout show of modern art, a time when everything changed and art was on cutting edge of that change. When President Teddy Roosevelt declared, “That’s is not art!” That was enough to make the show important. It was a show that introduced Duchamp, Cezanne, Monet, Van Gogh, Degas, Braque, and Gauguin to America. Patrons and press alike ridiculed the show. And as it goes, it has been mentioned as the most earth shattering art show in history I hoped that maybe this show might prove to be the same, since we have been in this tsunami of change lately. So with this expectation, I went to The Art Show.

This is the 21st anniversary of the show that is organized by the Art Dealers Association of America to benefit the Henry Street Settlement a New York City social service organization that has been operating since 1893 and currently serves over 60,000 people with a wide range of support from transitional and supportive housing to performing arts. Of course intentions are great but since it is called The Art Show you hope the art will be great as well.

Arriving at the Armory I was surprised to find a couple of bus loads of soldiers in full uniform shipping off just to remind us all that the Armory was still used as a military center and that there were things more important than art happening out in the world. I pushed through the throng seeing off the troops and entered the darkened entryway. I bought my ticket and entered the main hall and found myself overwhelmed by the smell of body odor. This smell would follow me around the show and would shade my feelings and opinions throughout. Stench does matter even when looking at art. It might be the smell of the recent economic downturn that is hitting everybody hard, but as I started my rounds it became quite clear the work might have something to do with it.

This is not an international art show, all the galleries are American although there are some international artists that are represented by some of the galleries. What I quickly found out is that most of the New York galleries haven’t signed a new artist since this show started twenty-one years ago. I quickly realized the most exciting work was from galleries outside of New York City. Finally, I came across a painting that stopped me in my tracks, it might have been because of the recent election of Obama and the added interest of Abraham Lincoln, it was a portrait of the man himself at the Alpha Gallery from Boston, Mass. The portrait of Abe was modern, powerful and had an edgy excitement. After that it was more of the same boredom, a real girl strapped into a chair served to excite some people, who hadn’t already witnessed Tilda Swinton hanging out in a glass box ten years before at the Serpentine Gallery in London. A real Street Corner with signs and sidewalk in a glass box played on the found object fascination of Duchamp, but this was more about a found place. Allan Stone offered some interesting bric and brac. Metro Pictures was my favorite, highlighting the work of Robert Longo a fixture of the 1980’s, who disappeared and then directed a very bad sci-fi flick, but he is back better than ever. His drawing of a killer shark was eye-popping as well as beautifully produced.

Continuing and getting more of the same with the smell still stalking me, it became quite clear that the spattering of artists that some galleries still sold from the original Armory Show: Braque, Monet, Cezanne and Duchamp are still the most exciting artists in this show one hundred years later. Finally, after doing another quick run through to make sure I hadn’t missed anything, I did find a painting, actually a series of paintings that sized up the whole show for me, they were paintings with the words, "Blah! Blah! Blah!" scribbled across canvas in florescent graffiti strokes. I left the show wondering when art would change with the veracity the rest of the world is changing these days. It isn’t clear, but there is always hope, maybe next week at The Armory Show on the Hudson River Piers. It’s worth wishing…

Charles Long is a writer in New York.
ccl3@earthlink.net