Liu Ye: The Book and the Flower

Chinese artist Liu Ye, now in mid-career, has made a name for himself as a painter of disparate themes, ranging from his childhood experiences in China to his six-year sojourn in Europe as a student and artist. Having studied painting at the Central Academy of Fine Arts in Beijing, Liu Ye moved to Europe to continue his education at the Hochschule der Künste in Berlin. He is known for his literary allusions, which include the stories of Hans Christian Andersen and Lewis Carroll and the writings of Tolstoy and Nabakov. In the current show, he is offering examples of paintings done for three series: Flower, Book Painting, and Banned Book. A painter of exquisite skill, he paints figuratively, using recognizable imagery to relay meditations about both the nature of art and current society. More than many Chinese artists, Liu Ye reflects Western influence in his painting. Additionally, there is a stillness, a contemplative quality, that causes his art to stand out.

One of the standout images in the show is the artist’s Book Painting No. 20 (2017), a copy of a flower, likely a tulip, hanging upside down with dark leaves encircling it, taken from a page in the German photographer’s 1936 volume called Urformen der Kunst. A black-and-white image on the right page of the painted book (the left page is blank), the flower is rendered with startling accuracy, but it also is taken with melancholy. The sharp indentations at the end of the flower, along with the lines structuring its body, are reiterated in the dark leaves that surround is white form. As an image it is both scientific and sad: clearly, something beautiful is no longer alive, meant now for the subject of study. In Book Painting No. 26 (2019), another image painted as a copy of a Blossfeldt photograph, the plant looks greatly like a line drawing, with tendrils (no flowers) encircling a central stem and moving outward into tight spirals that stand close to its vertical. Looking at this marvelous artistic rendering of art imitating nature, we can only admire Liu Ye’s in-depth report on an image invested with a beautiful symmetry produced not humanly but by nature.

At the same time the painting is a rendering of a photo--an image of an image. So this is, in the truest sense, an artwork based on another artwork, even if the latter is a direct portrait of nature. By painting pictures of images already created by people, Liu Ye is not only representing an artificially constructed reality, he is also calling attention to the innovative imaginative capability of the artists. Books, until the creation of computers, were the chief repository of information, and surely this is partly the artist’s point, namely, that the reproduction of an image continues that image’s life, even should it be a picture of a picture. In Book Painting No. 6 (2014-15), Liu Ye has painted two colorful pages, entirely in red, in an open book--we remember that red is the favorite color of the Chinese. Blank, lacking text, the colors are in fact an exercise in abstraction, despite the fact Liu Ye is portraying an object available in real life. Once again, the artist has found a way of circumventing our expectation of reality--the imagination is meant to imitate the real--as realistically as possible.

Likely the most difficult, and disturbing, image in this show is Liu Ye’s 2017 reproduction of the first page of Nabakov’s Lolita, a novel written in the voice of a girl’s sexual predator. The prose of the book’s opening is difficult and deeply troubling, being the open admission of an erotic obsession that is entirely unsanctionable. We quite literally read this painting rather than observe it.The text is of course an image, but it incorporates literary meaning. Like the other paintings in Liu Ye’s show, called “The Book and the Flower,” it is a picture of a pre-made image, rendered more complex in this case by the fact that it is communicating written information. So there are two important components to the painting: the visual reality that rests on another visual reality and the trauma of a monologue delivered by someone deviant. The complexities generated by this painting of a book page are thus large. In this excellent show, Liu Ye relies on a reflected realism--a version of the object that renders physical reality from a distance--in ways that transform the painting we see as well as the object it represents. Paintings about photos, books, and words in books thus become inspired visions, and versions, of what they convey. WM 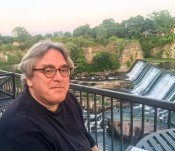