The current exhibition of works by the artist L. Brandon Krall at The Steven Harvey Gallery, 208 Forsyth Street (a three-minute walk from The New Museum), includes six geometrical abstract paintings, a number of “altered reproductions”, and sculptural “readymades” reminiscent of the work of Marcel Duchamp. Copying from the work of other artists as a means of learning and discovering one’s own style is a time-honored tradition within the visual arts, and to a large degree, the issue of influence is the subtext of this exhibition.

July 28, 2021 will mark the 134th birthday of Marcel Duchamp.  The influence of Marcel Duchamp, embodied by the term “readymade”, seems ineluctable today.  Duchamp used this word to describe his selection of manufactured objects as works of art and it is a bedrock term in the vocabulary of 20th century art.   I recently asked the scholar, critic and writer Francis M. Naumann, about Duchamp’s influence:

Historically, Duchamp’s influence was at its peak from 1955 to 1968 (the year of his death) when he was first recognized by Johns and Rauschenberg, Cage and Cunningham.  It emerged again for another decade during the heyday of Conceptual Art in the 1970s, and then again in the 1980s, during the era of the Appropriationists …I suppose you could say it hit a new high today with artists like Jeff Koons and Ai Weiwei, both of whom openly acknowledge the important precedence of his work on theirs (1).

The years “from 1955 to 1968,” also saw the rise of Fluxus, an art movement that embodied Duchamp’s influence and the idea of “readymades”.  Fluxus evolved during the late 1950s, akin to another art style known as Neo-Dada.  But whereas Neo-Dada was an early name for Pop Art, Fluxus was akin to Dada in its use of anti-art ideas and nonsensical events.

The artist L. Brandon Krall openly acknowledges Duchamp’s influence on her work, and more importantly, she brings her sense of humor and understanding of his legacy to her own pieces.  Ms. Krall is not only a practicing artist, she is also a published Duchamp scholar, who incorporates her historical insights regarding his work into her own “readymades” (or “sculptural Objets” as she calls them), abstract paintings, and “altered reproductions”.  Like some of Duchamp’s works, the art in this exhibition also has a basis in words and language. This feature is not meant to detract from the visual experience of the work; Krall wants to encourage you to think about what you are viewing, “to activate your grey matter,” as she told me recently.

Upon entering the Steven Harvey gallery, one encounters a four-foot high table to the right, spanning the area in front of the window.  Placed on the tabletop is a number of small, “readymade” sculptures, including a clear plastic box of ice tongs, and a revolving metal spiral that rotates when you push it (called a tour billon, which translates to “dust whirlwind”).  Attached to the top of this spiral sculpture is a drawing. There is also a sculpture consisting of a wooden base to which are affixed a number of four-inch metal spikes, such as those placed on windowsills to deter pigeons.

Interspersed among these “readymades” are notebooks stacked in piles of three or four, and clear plastic folders containing loose pages of seemingly random handwritten notes and magazine pages.  Within this grouping is a cardboard box containing nine loose photographs reproduced on cardstock, each image altered by a colored line the artist has drawn across it. These are described as “altered reproductions”.  In addition, there is a white loose-leaf folder containing material on Duchamp’s work Pharmacy. There are also pages referencing his art such as an advertisement for a stereoscope, a handheld 3D device for viewing slides. These works also reference Duchamp’s La Boîte-en-valise (Box in a Valise), a work created between 1936-1941, and consisting of a number of reproductions of Duchamp’s works in miniature.  But in this case, Krall has up-ended the valise and placed her version of its contents on the table top, at the same time pulling us into her background on Duchamp scholarship, whether we want to be there or not.  The works displayed on this table - “readymades”, “altered reproductions”, hurriedly written notes and reminders, etc. - reflect the artist’s life on certain days or months of a particular year. But they also reflect our collective 21st Century life in its time-oriented physicality and hurried lifestyles.

Krall avoids appropriating original works but clearly plays with the appropriation concept in two other works in this show.  Displayed on a pedestal is an “altered reproduction” of a 1923 work by Man Ray, Work to be Destroyed (a metronome with a photograph of Lee Miller’s eye attached to the metal pendulum). In Krall’s “altered reproduction”, she has attached a photograph of a person’s nose to the pendulum and titled it, Trompe Nez, (Fool the Nose). In the middle of the gallery, Krall has recreated Duchamp’s 1913 readymade, Bicycle Wheel. In her version she has added two small bells, the kind found on the handlebars of a bicycle. The bells - each engraved with the words “Habeas Corpus”, a Latin phrase meaning “show the body”- sit on top of a small plastic display unit. Beneath this Krall has placed an artist’s pallet. Under the stool on which Bicycle Wheel is mounted sits a clear, plastic box of sunglasses, a work titled 3-D, another reference to Stereoscopy, a “readymade” Duchamp created around 1918-1919.  Krall’s rendition of Duchamp’s bicycle wheel with its references to other “readymades” is a good example of what the artist Mike Bidlo told me about her work: “L. Brandon Krall is a child of Dada, who often uses past art history as a springboard for the making of her extraordinary, contemporary work.”

Krall’s scholarly interest in Duchamp is evidenced by a series of essays she wrote over a period of ten years. One essay in particular, “DA VINCI DUCHAMP, mime”, published in November 2018, presents a scholarly comparison between the two artists. In the course of her Duchamp research, Krall made an important discovery: that the cover of the first volume of a series of children’s books published at the turn of the century, La Science Amusante par Tom Tit, was similar to the cover of the 1945 issue of VIEW magazine. While the children’s book cover shows a spray of sparks coming from the mouth of a bottle, the cover of VIEW magazine shows a plume of smoke exiting the mouth of a bottle. This particular issue of VIEW, is known as the Duchamp issue and was the first published monograph on his work.

The next part of this exhibition, a group of six paintings titled Alphabetic Equivalents, were painted from 1979-1980, around the time the artist moved to New York, and during a period when Neo-Expressionism was claiming attention. “I think of painting as geometric abstraction,” the artist told me.  “Originally there are twenty-six paired wedge forms to devise an alphabet of geometric abstract painting of ideas . . .  roots of words and include MU and MA as subjects" (2).  One painting in the exhibition is titled MU, defined as “without or nothing,” a Japanese concept of time and space.  Another painting is titled Passus, which means “passage through time”.  I had difficulty relating to the esoteric guidelines Krall used to create these geometric paintings.  Although I can see how the influence of Duchamp’s use of word play in his titles could have influenced her use of words based in different languages.  These “letter-forms” within the paintings are hard to decipher and Krall’s attempt to equate language with shapes detracts from the power these paintings might have had on their own.

However, two of these paintings seem to stand out as purely visual works.  The artist considers Principium, done in the 1980s, to be a transitional painting.  It is a geometric abstraction over which is drawn a cubist figure.  The title means “origin” or “beginning” and Krall seems to be making a connection between her early painting and Duchamp’s Nude Descending a Staircase.  By combining these two historical works and periods, Krall demonstrates her strength.  The second painting titled MENS (meaning “mind”), is composed of two canvases stitched together down the middle of the picture, leaving an inch of the canvas sticking up where the two pieces join together.  It presents us with a visual metaphor of the mind. This painting has a Dada quirkiness which appeals to me both visually and conceptually.

Overall, the physical objects in this exhibition reveal Krall’s strength as an artist inasmuch as they display her historical insight into the works of an artist as complex as Marcel Duchamp, while her sense of Dadaist humor is evident in several of her paintings. WM 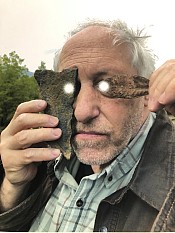 Erik La Prade has a B.A. and M. A. From City College.  Some of his interviews and articles have appeared in Art in America, The Brooklyn Rail, ArtCritical and NewsWhistle.  His book, Breaking Through: Richard Bellamy and the Green Gallery, 1960-1965, was published in 2010.  MidMarch Arts Press.  His forthcoming book, WEATHER, is published by LAST WORD BOOKS.  Olympia, Washington. 2020