Once a year, Miami is the stage on which the art word convenes.  Art fairs are theater: attendees look at artwork, dealers look at attendees, everyone looks at everyone and everything.  The boundaries between audience and performers are blurred; everyone becomes Participant.

It is therefore fitting that, as part of this year’s Kabinett—a curated sector of Art Basel | Miami Beach, Sperone Westwater will present three large, theater-based collage works by Argentinian artist, Guillermo Kuitca (b. 1961).

In the catalogue for Kuitca’s mid-career retrospective, Everything: Paintings and Works on Paper, 1980-2008, Andreas Huyssen wrote that the artist was “Fond of remembering Isadora Duncan’s saying, ‘I could dance that chair.’”  In the case of these three works, Kuitca has collaged the acoustics.

Each Acoustic Mass collage is based on the same curving balconies and rows of seats at London’s Covent Garden. The works differ, however, in color and in the sound implied by their construction.  Acoustic Mass I (Covent Garden) is the only collage of the group to include black, white, and red.  The background is black and Kuitca creates the depth of the hall by clustering irregular, though mostly verging-on-rectangular, pieces of paper towards the center.  At first it appears that the red pieces are hiding under the cacophony of clustering white scraps, but upon closer inspection, there are small bits of black paper glued within the layers.  Black is not only the background of the work, it is also pushing forward within the ranks of collage elements.  The resulting impression is of movement.  This is not a static, empty architectural space; there are frequencies at play.

The effects are similar in the other two works, although they exude different visual rhythms.  In Acoustic Mass III (Covent Garden), black and white scraps of paper on a white background form the same architecture but with a pulsing delicacy towards the center of the balcony. Slivers of white paper create a complicated map at the work’s center.  The acoustics here are higher, softer, and more intimately piercing than those in Acoustic Mass I, with its larger pieces of paper and syncopated colors.

The third work in this group provides a quivering, pulsing finale.  Thin strips of red paper, placed on a black background, create the trio’s most skeletal or architectural representation of the theater.  Placed in shivering proximity, however, the red lines overlap and the space seemingly reverberates.

Whatever visual depths and imagined music Kuitca’s collage’s conjure, his choice of materials brings the attention back the works’ materiality and surfaces.  The artist’s hand is ever-present in the rips and cuts of the small bits of paper as well as in the smears of glue linking them together.  This was a sticky process and the nearly six-foot square pieces of paper, on which the collages were made, pucker from the adhesive.  The puckering causes slight waves to emanate from the center of the works, once again creating a sense of the frequencies filling these spaces. 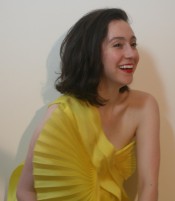 Blair Asbury Brooks is a writer in New York City.