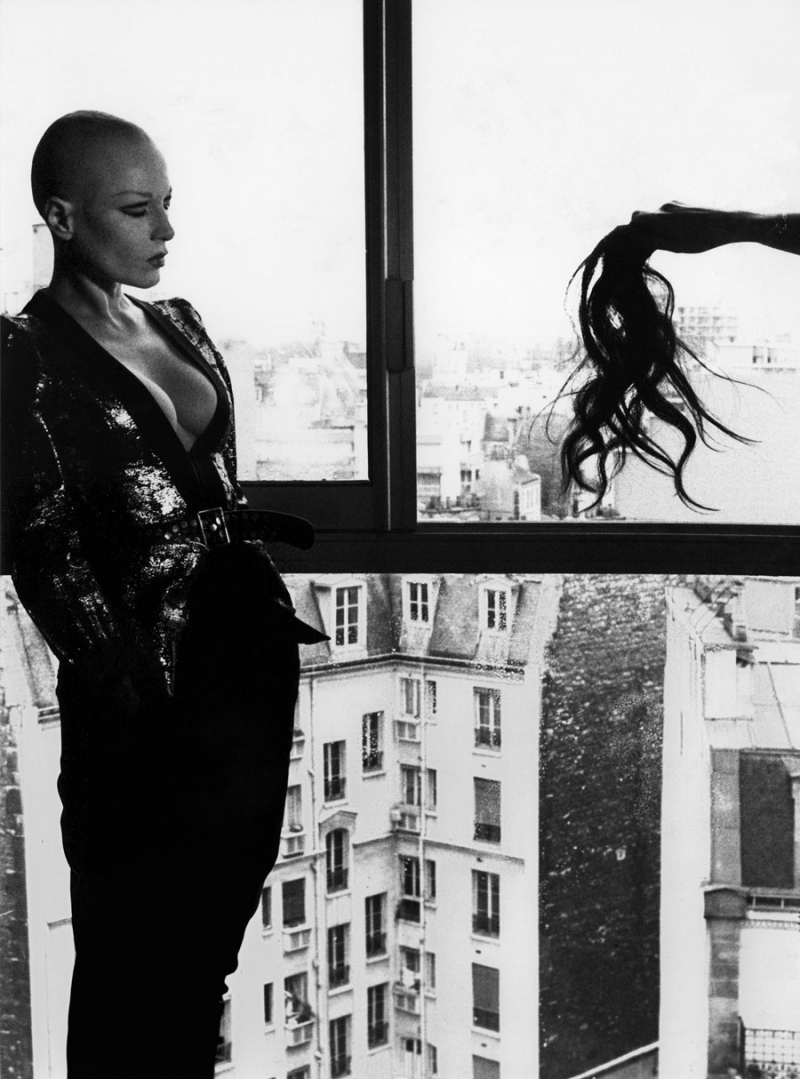 
Who’s Who in the Zoo

Just as the birds and bees are coming out to play at the onset of the summer season, The Swiss Institute graciously treats New York City to one of Switzerland’s most renowned performance artists - one who's work is infused with gender issues. Manon, an active artist in the 1970’s, revived her artistic impetus in 1990 after a seven year hiatus. Here, she engages with the audience through several photographic series and installations that are spiked with androgyny and served chilled with a definitive bite. Mutating gender roles prevail as poignant indicators of a revived generational impulse to tweak definitions of power and entitlement in attempts to deduce a shared notion of equality.

Manon generated her first installation in 1974. It was entitled The Salmon-Colored Boudoir, a sensual and personal insight into the dramatic, involved inner-workings of the artist’s bedroom. The End of Lola Montez, first performed in 1975, came to be a much more potent representation of Manon’s insight, fusing her own paranoid sensibilities with contemporary female notions. Although it is currently empty, the black chair Manon occupied in a performance in 1975 - with chains around her ankles, wrists and neck - still resides at the Swiss Institute. She was confined to a black, barred box with exterior lights framing her self-made display enclosure. She wore a black dominatrix outfit, skin tight with a slit down the front to her sternum, accompanied by a black skull cap and masquerade mask over her eyes. A mysterious spotlight cyclically brightened and faded, focusing directly on Manon and her blatantly sexualized composure that was maintained despite her compromised situation.

Lola Montez, Manon’s inspiration for the piece, was a courtesan and performer of 19th century Europe. She submitted to feminine stereotypes that would arouse offensive sentiments in contemporary society: she was sexually active amongst the European elite; she manipulated her exposure, advancing her general welfare while emanating the aura of a purely assertive, beautiful, stubborn bitch. These characteristics fed her livelihood, but Lola Montez became totally reliant upon them. She employed her vaginal embrace dutifully in relationships, and eventually this became the definition of her own existence. Manon presents the contradictions of this understanding of feminine power by twice-over containing herself in the abysmal box amid staunch chains. It is compositionally explicit that Lola’s behavior not only confined her own capabilities in the refusal to look beyond the perks of her overtly sexualized and markedly feminine behavior, but literally made it impossible for society to separate her from that image thus impounding her within the stereotype. By doing so she negated the possibilities of savoring the breadth of life available to those who refused to distinguish between specified ‘male’ or ‘female’ activities and lifestyles. The prevalence of self-perpetuating stereotypes arouses a desire to investigate whether the most definitive problem facing feminism was, and still is, the individual tendency to work with what you’ve got rather than challenge it.

Manon’s stark confrontation with her claustrophobia in performing this piece and refusal to accept the easy-way-out further annunciates the death of Lola Montez’s persona and her contently sanctioned reality. The lighting expands further upon her critique of gender roles. Exterior light bulbs fashion the cell into a 1950’s make-up mirror, where she is feminized to a greater extent and put on display like a kitschy pair of fake eyelashes. Those lights remain on throughout the performance. The yellow, dull glow donates a dreariness to the scene that makes her performance feel dilapidated and pornographic. The spotlight becomes Manon’s central illumination despite the sullen peripheral assistance. Only with the spotlight could the viewer fully absorb the intrigue of her internal defiance. In this subtle action, Manon’s piece reeks with a timeless resonance until the times change. Women have no doubt made societal strides, spanning from explorations in acceptable dress code to challenging engendered work ethics and legal issues. Regardless, women still get paid less, are regarded as the weaker sex by many, and are regularly given special treatment. In this way, Manon’s piece becomes an effervescent critique of women in general and the inability to move past these injustices. Only in times of dramatic upheaval, indicated by the light, are these constraints and biases uncovered. As a recurrent aspect of the piece, it emphasizes a cyclic pattern that doesn’t start and begin but rather occurs continuously over time. Manon attempts to unveil these preconceptions of ‘feminine power’ in attempts to halt the regurgitation of redundant stereotypes. She seems to be speaking more so to female viewers in this piece, demanding they register themselves outside of the assumed constraints of gender in order to overpower gender as an issue.

La dame au crane rase (The Lady with the Shaved Head), on display in the main gallery of the Swiss Institute, arose in 1977/78 when Manon moved to Paris. Initially a series of 158 black and white photographs scaled down to forty-eight, of which less than thirty are shown at the Swiss Institute, Manon further elaborates upon the transgressions of gender associations. The series is paired with Borderline (2007) on three of the four walls, a photographic series of vibrantly colored self-portraits that drain the black and white photographs of their forceful intrigue and prove to be quite distracting.

On the wall closest to the entrance, Manon attempts to challenge aspects of the accepted ‘feminine.’ Her naked body, gracefully poised full-frontal on a stool, scorns a checkerboard placed in front of her. Bodacious and sensual, the female body taunts the technicalities and strategy associated with the leisurely prop. The image proves surreal in its hazy juxtaposition, revealing the tactical impulse to manipulate gender and the standardization of gender as a pawn. This first set of images also presents the bald-headed Manon against the Parisian skyline, taunted by a dark wig held in front of her. Dressed in a marvelous black pant suit, bedazzled in dark eyeliner and lipstick, she sneers empathetically and revels in her self-sufficient beauty. She challenges what you need, if anything, to confirm the feminine.

The second wall proves to be the most obscure and least compelling, leaving more to be desired from the forty-eight photographs that compose the entire series. Although the compositions speak loudly, the pungent dialogue of the first wall seems to disintegrate. These photographs address the idea of gender on a larger scale, pining back to her prior performance piece. The artist, complacent in a trench coat, is seen adjacent to a completely exposed prostitute in the strongest photograph of this section. The head of the prostitute is cut off, making the utility belt around her waist the accentuation of her profession’s physical prowess and sexual power coupled with control over her own corporeal domain. The powerful comparisons resound in this photograph, implementing a discussion of weak versus strong, vulnerability versus power.

The third wall breaks up the photos into two groupings, the first of which translates into the fluctuations of identity. Manon presents herself in various masculine guises and directly confronts the androgyny of her bald head and adorned face. She embraces her trench coat, a necktie, and baldness as indicators of her individual sensibility triumphing over enforced norms. The images resound compositionally, compelling the viewer to grasp Manon’s photographic aptitude amid her thematic consistency and desire to challenge the viewer’s internal connotations. After four photographs, the atmosphere of the last wall becomes detached and cynical. Eyes are down-turned or more thoroughly darkened, an obscure uncertainty appears. In one image Manon is seen in profile holding a glass half full (or half empty?) in one hand while the dueling photograph to the right presents a fragile, rickety fire escape swinging free from its framework, leading nowhere. The last photo presented in this series shows Manon’s eye peeping through a square in a door, revealing only a quarter of her face in which her eye resonates with a certain force of questionable distaste, dedication, anticipation or agitation. This last section scatters masculine and feminine indicators, comprehensible only as shuffled imagery meant to confuse, then challenge the viewer to disregard obvious associations. Viewers confront the most fundamental, yet convoluted, comparison of good versus bad further vocalizing how relative even seemingly distinct boundaries become. The final image serves as the climax for the series in which they eye festers in ambiguous infamy. In recognizing the disseminated roles, one must expand beyond them rather than ingest them with ease and eventually reaffirm them behind closed doors.

In viewing Manon’s work for the first time I was immediately reminded of The Hunger Artist by Franz Kafka, a tale in which a man puts his fasting abilities on display as they cycle in and out of vogue. Kafka writes, “[I]t was not the hunger artist who was cheating, he was working honestly, but the world was cheating him of his reward.” Referencing Kafka’s words in this manner exposes what has always bothered me about feminist art: the pushy sense of “it’s not fair!” that lacks any sort of substance to propel a change. Let’s just say I rarely find any cheese to accompany the whine. Although her messages translate to viewers of all genders, I think what is especially empowering about Manon is her directive toward nipping stereotypes at the bud and targeting the women who supply and maintain them. She strives to dismember the appendage of entitlement in exchange for equality and a neutral slate. At the conclusion of The Hunger Artist the starving protagonist dies alone, his audience no longer interested in his fasting shenanigans, and claims he only chose his profession due to lack of interest in anything else. There’s a great, big world out there, ladies; let’s not shudder into a mouse-hole of assumed femininity before grasping that anyone can do anything. If you don’t believe me, you should try it. I dare you. 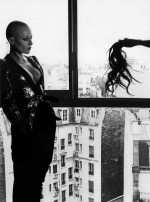 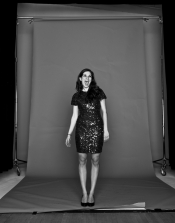 Lynn Maliszewski is a freelance writer and aspiring curator/collector residing in New York City. She can be reached at l.malizoo@gmail.com