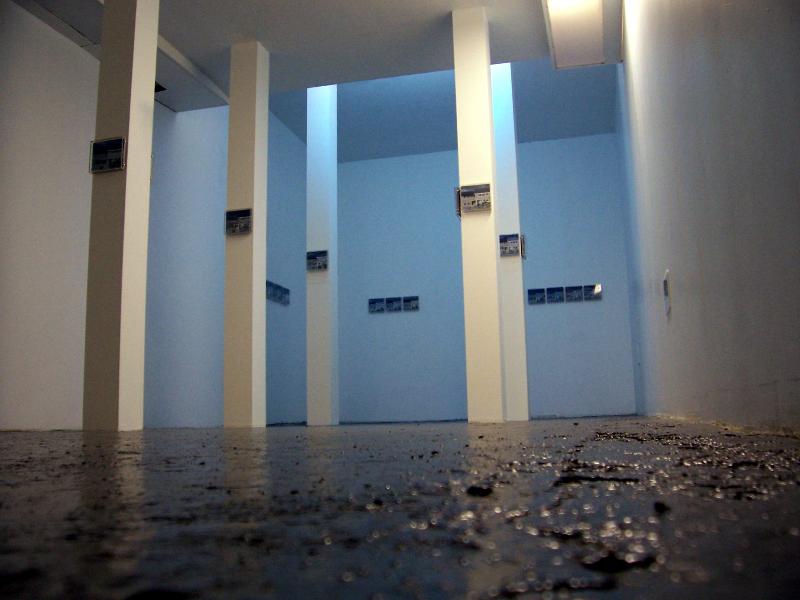 This is not a review, if anything it’s an attempt at an index card. Mark Scroggins posits that an index is a ‘re-seeing of the volume, a re-reading’ [i] It seems fitting then that John Lalor, in conversation with the philosopher Jonathan Lahey Dronsfield on the opening night of his exhibition in Pallas Contemporary Projects, talked about getting an archivist to help him with his thought processes as they’re getting away from him with time. Further, this show would seem to be a re-reading by Lalor of much of his past practice – from his long running versions of the democratic paintings series, to his move in recent years to video making. In Forward Pass Lalor presents a posterwork, a new video (very dark skies over social housing - the film) and an installation of columns, hoists to the democratic paintings series no 9 - very dark skies over social housing. This immediately draws to mind many recent shows in which the artist, stretched across geographical space and demand, exhibits the same work with apparently new intentions – or not – and is a practice that can be easily tasted as flat and unimaginative or as a necessary, on-going organic development within an artist’s oeuvre. This is different than continuity in style, this is pure repetition: last year Thomas Hirshhorn did it en masse with his Concretion Re show, transferring the original Concretion show to his gallery, Chantal Crousel; more recently the French man Loris Gréaud seems to be bringing his Cellor Door work wherever he is asked.

So how does John Lalor fare in his re-configuration at Pallas? A graduate from Limerick School of Art, he has lived in Paris, France for years: not a slight sojourn with the country but a sustained settlement that, I think it is safe to say, has made him an artist immersed in an art-philosophy that leaves his work feeling indexed by his wide cultural interests and reading. The engagement Lalor has exhibited with artists such as Roman Opalka and Daniel Buren (artists fixated on creating original repetitions qua personal style) in the past, through highly idiosyncratic, intuitive texts (in both French and English), as well interactive collaboration, has seen his art, at a certain anterior level, take on a theoretical rigour that feeds into his practice. Often times this can seem to start with texts, as with his show in the Centre Culturel Irlandais, Paris, Red Marker=Video (2006) where his trademark red-lettered, grammar-free text on Jean-Luc Godard became a mural, and continued into his painting series and more recently, his videos. Lalor also talked about his need, as he grows older, to have more stimuli, more things around him to make work: it doesn’t just come about, appear fortuitously. He’s frank about this gathering: the importance of Micheal Mann for example, or Jean Baudrillard, the filmic world of space and time and philosophy.

For Forward Pass he has written a new text – memory and the idea of the novel – and presented it in three large posterworks. An investigation into re-incision, re-presentation, as he terms it, of the artefacts of memory, it takes on the idea of the novel. As a text to an exhibition, it disabused me of any notions I had of any resistance to take on the difficulty of memory in the production of artworks. Memory and the idea of the new – this is perhaps the fulcrum of the show, the democratic paintings series no 9 - very dark skies over social housing distilled into the video, a new work, which coherence is sought in this text. So any attempt at an indexing faces immediate challenges: the show itself seems to be a reduction of past events into the present moment, offering the challenge of representing the new out of the previous – just as Loris Greaud has recently done with his much fêted Palais de Tokyo show, transposing much of it for a new offing in London’s ICA. And whether this type of re-configuring makes for worthwhile and solid independent shows I am not always sure, perhaps not.

My own memory, as audience member, was jogged: the space of Pallas Contemporary Studios recalls the space Lalor employed in Paris, in the Centre Culturel Irlandais, in 2006. Then showing his first video, l’obligation du blanc, Lalor imported a shipping container, placed it in the courtyard, extramural of the rest of the exhibition and showed this video within its darkened space. A video shot in a pine forest on the Atlantic Coast, the viewer is brought traipsing past tree after tree, ducking and diving with the shot, past column after column, as dusk sets in the event becomes blurred in its repetition allowing the occasion to become elegiac for something out of reach – rather than something insipid or monotonous.

In Pallas, Lalor has installed reduced columns that recall those that appeared in the same Paris show as well as in the Groupe Laura show in Tours (2006); at the far end of the narrow, tunneled space there is a forest of white supports, hoists to the repetitive the democratic paintings series no 9 - very dark skies over social housing. The paintings themselves are of reduced scale, a succinct rescaling to the dimensions of the Pallas space, making it a reduced version of the Paris show; a configuration that Lalor saw as converting Pallas into a sort of maquette in and of itself. This at least seems to be a worthwhile re-reading by the artist of his practice across time and gallery space: without imaginative engagement with each new successive exhibition space, the practice of carrying over previous work would certainly become uninspiring.

The experience of space is punctuated by these columns, the experience of the democratic paintings series, hoisted on these columns as they are, is likewise punctuated. They’re like singular frames, stills from an unending reel in realism. Their representation is a repetition: these paintings go on showing their singular image, self-acknowledging the stasis of painting as a representational tool. They appear as if slices from a reel, dispersed in time and space, to be taken in when moving through them, past them, around them.

The shipping container brought the viewer toward the video, and something similar occurs in Pallas – the boscage of columns at the far end, punctuated with the small paintings, is the destination, the spatial end point of the exhibition – before one about-turns and re-navigates the show once more. Turning and turning again, it is possible to continue to weave through this installation.

And the video - very dark skies over social housing -the film would seem to try and act as guide to this action and re-action. As the “Pseudo-technical foot note” from the text memory and the idea of the novel informs, the video was shot with three different cameras. The first present at the ‘original’ location in time – the space, Volapük, in Tours – registering the event, the second two, of different sizes, different powers, registering the repetition of the maquette Lalor made of that space, after the original time of the show. So the video it seems, in both production and intent, becomes a representation of ‘re-called events’ – a novel event based on old predicates. That is to say, an attempt to re-enter the past memory, the significance of this house and the ‘melancholie’, as Lalor himself put in, of there being ‘no going back’ to the time when he first entered it (the house is his wife’s parent’s house which he first entered some twenty years previously). Because to do so results in a reduction in scale, in representation – it would seem any attempt at a pure repetition, a novel event with its own terms, its own scale, is impossible: each repetition, each re-presentation, is a repetition of an event.

Lalor himself, never one to glance his practice with fleeting or flippant thought, declared in conversation with Jonathan Lahey Dronsfield that he was beyond concerns such as any death painting has undergone. And with such a statement on board, the video becomes a counter standard in any index card on Lalor’s democratic painting series: as a viewer, located as it is in an alcove before the length of the tunneled gallery space, one can decide to stop, or be stopped by the video, and watch it. Is it to be viewed as a mode d’emploi for the rest of the show? A modus operandi for how to navigate a painting series in a gallery space, a forest of columns breaking the filmstrip into individual segments that ask to be differentiated where no difference exists? It seemed to me a corrallary of the video l’obligation du blanc, the last work I saw of Lalor’s ( I got a chance to see it on the big screen when it was screened in La Fémis cinema in Paris). With an ambient soundtrack the same sense of the traipsing, the trudging, is felt; this time in the gallery space in Tours and in a maquette (the result is an environment not all that dissimilar to Pallas’ gallery) In a way one is the extension of the other, while not being pure – insipid – repetitions of the same work. And with this important aspect on board it is safe enough to say that Forward Pass is original in its approach to bringing the artist’s practice to Pallas.

It is tempting to see the progressive change in the sky above Lalor’s social houses as a nod by the artist to wider contexts, wider concerns. But like the (for Lalor at least) unnecessary declaration that painting is dead, perhaps likewise reading the political into the darkening skies of this series of paintings is useless, facile even. From blue skies to dark skies, the difference is immutable – what I find interesting is the decision of the social housing in the first instance. The event of house and home, repeated, re-acted, makes reflection possible on a wider world that itself seems immutable and static. They’re repeated, these two semi-detached houses, just as we all believe each of us must have a home somewhere, but we look at them singularly, inspect the canvasses for telling details, doing our best to invest them with the necessary singularity we invest in all the houses we consider homes. I suspect that the intention of the work is far removed from such investments, such a search for signs of the intimate, the confidential, but I can’t help consider them in relation to this plateaued social house. After all, with so much repetition and carrying over from previous forays, the audience must be allowed certain liberties; otherwise this trend in ‘re-configuration’ and ‘re-showing’ becomes merely pedantic in its insistence upon the importance of artworks as primary events to be repeated whereever the artist has been invited to exhibit. And to aid in this indulgence, I give the closing words of this index entry over to Gaston Bachelard: ‘Toute grande image simple est révélatrice d’un état d’âme. La maison, plus encore que la paysage, est “état d’âme”. Même reproduite dans son aspect extérieur, elle dit une intimité.[ii]

[i] http://kulturindustrie.blogspot.com/search/label/index
[ii] Pg. 77. La Poétique de l’espace. Presses Universitaires de France, Paris. 1974. ‘All great, simple images produce a pyshic state. The house, even more than the landscape, is a “psychic state”, and even when reproduced as it appears from the outside, it bespeaks intimacy.’
whitehot gallery images, click a thumbnail. 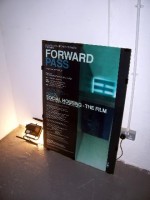 John Holten is a novelist, poet and editor. His website is found at www.johnholten.com