In an interview with Rolling Stone in November of 2007, hip-hop mogul Jay-Z revealed that he owns works by Andy Warhol, Jean-Michel Basquiat and Takashi Murakami. Within this very same month two Jeff Koons pieces Diamond (Blue), 1994-2005, and Hanging Heart (Magenta/Gold), 1994-2006, sold for a combined $35.4 million, which shattered auction totals for a living artist. Ironically, we live in a world where rapping can provide you with the quality of wealth required to collect highly expensive works of fine art and artists’ can make more money in two nights than most people can gross in a life time. Then it should also come as no surprise that the Contemporary Art market is extremely vibrant at a moment when average people pay premium prices for everyday necessities. The sale and production of cultural capital is on the rise, which is why Contemporary Art is seeing a hyper expansion of its global markets. There is excitement in the air surrounding artists and their relative practices. Contemporary exhibitions, auctions, galleries, institutions and art fairs are the avenues that link the public to the work, which is why the Museum of Contemporary Art Chicago is buzzing with excitement today.

Ultra mega-celebrity art star Jeff Koons in conjunction with the Museum of Contemporary Art Chicago and guest curator Francesco Bonami present a mid-career survey of the artist's most seminal works. The exhibition comprises pieces from the MCA collection, the Art institute of Chicago as well as Koons’s personal studio for this special occasion. Koons, best known for pushing the proverbial creative envelop is once again questioning our critical notions of taste and forcing us to re-think artistic materials. His reputation for provocative subject matter coupled with his shifting undefined style has enabled him to create work without boundaries. Often bordering on the Greenbergian Avant-garde & Kitsch testimonial, he operates off the grid some place between high and low culture. Koons has spent nearly three decades, representing and manufacturing the familiar fabric from everyday life. Whether it is through a recontextualization of misfit objects, the appropriation of modernist exhibition strategy or paintings that can only be described as discursive imagery, Jeff is able to present recognizable simulacra anew.

Hanging Heart (Blue/Silver), 1994-2005, hovers in the main hallway fifty yards in front of the entrance to the MCA; I gaze up at it to see the reflections of those who have gathered here today for a Jeff Koons spectacular. The press core gathers around a microphone, Madeleine Grynsztejn, Jeff Koons and Francesco Bonami speak briefly, we are then led into the first room of the exhibition (hallway right). As Bonami begins his curatorial tour he speaks about Michael Jackson and Bubbles and Equilibrium series of works-I listen for a moment and quickly run off to explore. The work is very large in scale, which must have been extremely difficult to curate. The MCA main floor galleries are not equipped to handle pieces of this size (I cannot think of any gallery that could provide adequate space to deal with such a large number of oddly shaped works). There is an old modernist approach in curatorial practice that says one must hesitate not to disturb the aura of the work of art-meaning that all art objects should have plenty of space around them so that the viewer can engage each piece entirely on its own merits (without the distraction from other nearby works). If this were the methodology used by Bonami I would suggest slightly more spacing, fewer works and using fewer pedestals for tall sculpture. It was as if the exhibition designers raided a Jeff Koons warehouse and were forced to show everything (editing could have made the showing stronger). Curation is based much on how you compose a space-the lines you create as well as the composition and flow of works, these issues could have been cleaner. Bonami’s use of space reminded me of the New Greek and Roman Gallery at the Metropolitan Museum of Art.

Impressive works were those that went beyond fabrication and being pretty. For me, Jeff Koons represents a particular humor, skillful design/craftsmanship and attention to detail. His paintings and seemingly inflatable sculpture astonish me most. In his paintings Play-Doh and Elvis, we notice serious painting skill that fools the eye into believing that we are seeing a photograph. By tricking the senses the audience becomes engaged in a trust game with the artist—as if falling back for Koons to catch us. I find this extremely curious as I give a double take to the wall labels, which tell me the unbelievable construction materials and mediums used. As for content, I find the painting far more interesting. Elvis 2003, not only speaks to the saturation of overt sexual material, it injects humor with the phallic symbol disguised as a lobster who wants to pinch the bottoms of the two plastic double-mint twin types adorning only G strings. In this piece the lobster is not the only character that resembles an inflatable object.

Realism is dead and its death occurred when Impression, Soleillevant by Claude Monet was shown for the first time in Paris during 1874, but Jeff Koons has a certain means of using Realism in an interesting thought provoking manner. Varying degrees of Photorealism have long since dried up and has very little to offer, but again, I give Koons a pass. Because these two styles are executed in such a devilish fashion they create new meaning for collage painting and pseudo-digital finishes. Saturation of technique and the innovation that springs from this monotony is what essentially kills off what used to be called “movements’ and what today we refer to as “styles”. Koon's hybridization of Photorealism and Realism uses the flat surface of the canvas to portray a digital print image or a silk-screen work. This is important because he uses actual hand-work to create the illusion of something else. The inflatable’s utilize a similar model as they try to be something they are not. The notion of disguise, metamorphosis and position are central to the work. Earlier I mentioned trust and perception as ways of understanding the Koons phenomenon, by pushing these boundaries he is able to move from Pop Art models and consistently avoid typecasting. When viewing the painting one can approach the canvas for validation, with the sculptural works-ropes or museum barriers keep us from getting too close, which allows us to guess a little longer. Dolphin is a great example of how a flawless paint job can fool all perception as he takes great care to detail down to the warning label on the belly of the dolphin and the small ridged seams that are characteristic of inflatable plastics; one cannot see that the object is cast aluminum. The exhibition tells us about Jeff Koons and the work speaks to the core of our American experiences with commodities, marketing and consumer culture. We have a reference for these kinds of material and a smart artist has the ability to inject curiosity, sensibility, trust and humor into the equation. 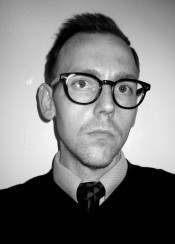 ​W. Keith Brown is a Chicago-based art educator, writer, and researcher. In the past, Brown has been an editor and writer for the Illinois Art Education Association, Stockyard Institute, and the Critical Visual Art Education Club. His writing has appeared in two books and a handful of local, national, and international publications and writing projects. Brown uses critical pedagogy, social justice, and education knowledge to expand his thinking on contemporary art history, theory, and criticism.