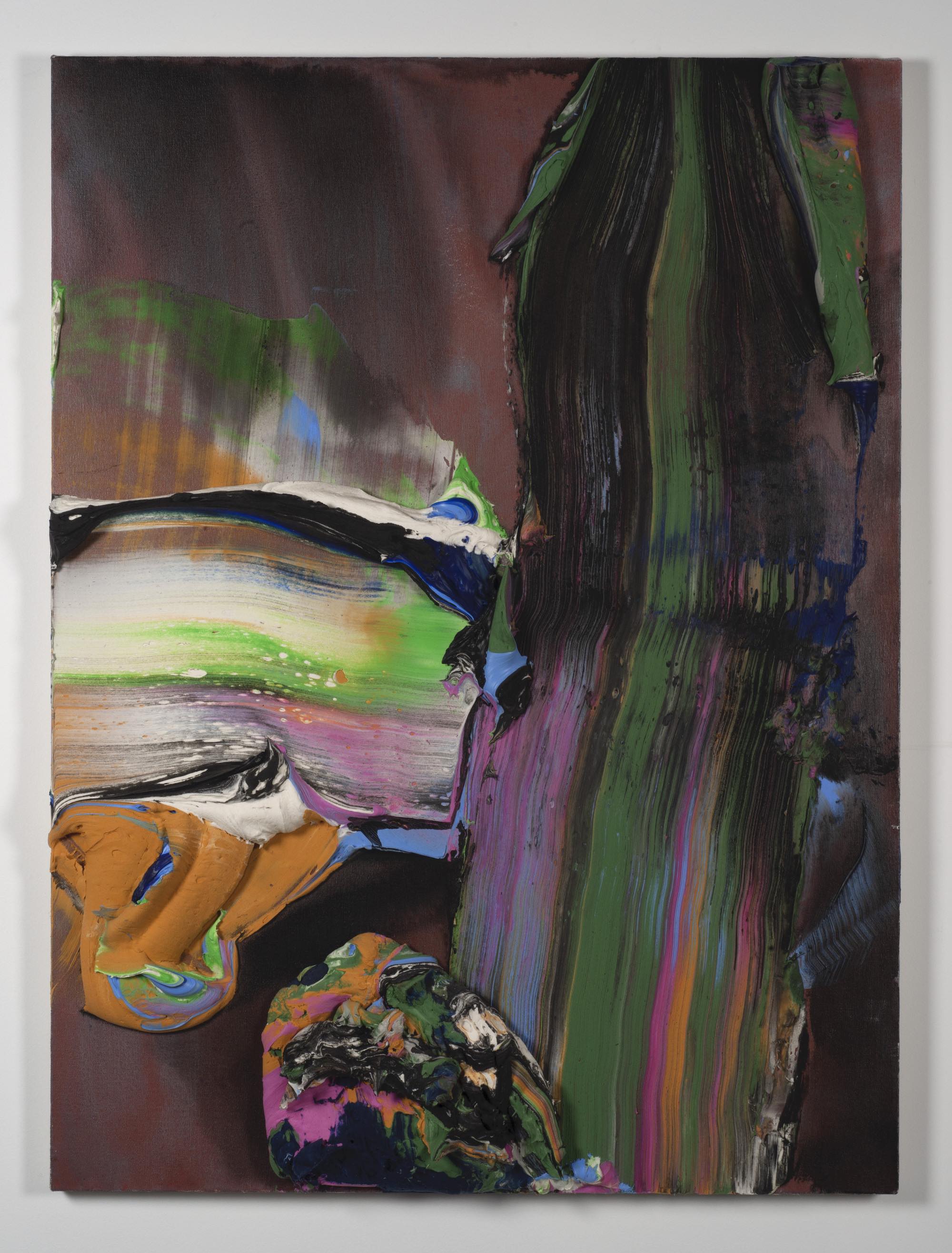 Not necessarily spiked, each painting by New York artist James (familiarly Jim) Walsh instead crests like an eggy spire of Pavlova meringue; is viewed head-on as the subtle terrain of a human face. Painted on canvas then mounted, the pure paint impressively lifts off without the assistance of plaster or other molding material. Walsh’s work is distinct from other Modernist abstraction by its textural quality. His life-long professional experience with Golden Paints has rendered him an expert technician and master of patience. The paintings on view at Berry Campbell forego major scale in favor of a very concentrated surface, apprehending the viewer’s eye from an intimate distance. The show’s title "The Elemental," might allude to Robert Rauschenberg’s Elemental Paintings, which gave agency to both the vibrant life and eventual degradation of materials used, or feel back further to Renaissance elemental conception. Questions of alchemy, preservation, handling, and drying time are all brought to light by the reliefs of Walsh.

The compositions themselves range from tufted and pouty to petri dish to epic mixing bowl. There are obvious clusters of like-minded pieces, sharing color or arrangement. For example, BLEND, NATURAL, and MAGENTA MAJOR are unified by a lippy palette and quenelle bulge. CRIN CRIN and Untitled both utilize a radioactive green, smeared and smattered, respectively. On one wall, a pod of miniatures express continuity with crinkly white-on-black contrast, blue wash, and confetti drippage.

Pieces like SAND SOUND align themselves in the lineage of Color Field painter Jules Olitski. SAND SOUND, as well as POSITIVE VENUS, resemble slick sea glass. These pieces recall Olitski’s Plexiglas, 1986 show at KASMIN, particularly Dream Time (1986). Olitski’s hovering color—manifested by the illusion of the depth of glass—is taken up materially by Walsh. SAND SOUND, largely gray and green, achieves a texture that is at once sludge and mist, appearing wet almost.

Some work, in particular the lone sculpture, stands on its own. Blue Column is kind of an ironed out John Chamberlain contraption which works like a swatch to anchor the deep blue color on one of its sides at the heart of the exhibition. If elemental in the Paracelsian sense, this color represents the nymph (water), floating the shell-like forms in numerous paintings and fishy figure in Untitled (2017).

One mesmerizing piece NATURAL evokes the cold tones highlighted by the Blu-ray version of the 1973 animated film Fantastic Planet. Like the skins of the humanoid Draags in the movie, the painting achieves a rippling, celestial balance. A veiny crimson-to-cream ribbon running through the bottom clots the whole. On display here are a range of brushing techniques which apply his blues. The upper left corner of the canvas combines pillowy blue, green, red which busies the top half aside from a white, pillow lip traversing its mid-section. The outlines of deep red and black function like the Draag’s application of stark eye makeup in Fantastic Planet, embellishing and framing a rare feature.

Works like LATTER WILD toy with maximalism of color and design, which has the potential to veer toward grotesque. Loose ropes of paint are contrasted by ridged swoops. Muddiness of color is briefly indulged but largely resisted in the process of the bottom third. The raised furry crescent of twirling black and white in OVERTONES resembles the shelf paintings of Boris Ostrerov. Whereas Ostrerov’s paintings refuse the notion of a portal in painting and view the canvas as libidinal structures, Walsh’s activate them physically, shifting from viewfinder to gateway. In OVERTONES, a peek of sky blue and cloudy white infiltrates the top in two windows connected by a swirling psychedelic caramel and swamp green. As with all maximalism, it is challenging to isolate and articulate the full palettes in Walsh’s work.

Whether by patience or will, Walsh’s acrylic reaches a physical pitch. Unlike the flat work of others in his immediate New York scene, the substance of these paintings is situated in the threshold between our side of the canvas and whatever world lies behind it. With playful variety and robust commitment to each stroke, what Walsh accomplishes is really an experience of surface. Please note that James Walsh is leading a gallery talk on the closing date of the exhibition. WM

Cori Hutchinson is a poet, watercolorist, and library assistant living in Brooklyn.