Teasing Out New Meanings in the Familiar: Interview with Ivana de Vivanco and Sally Kindberg 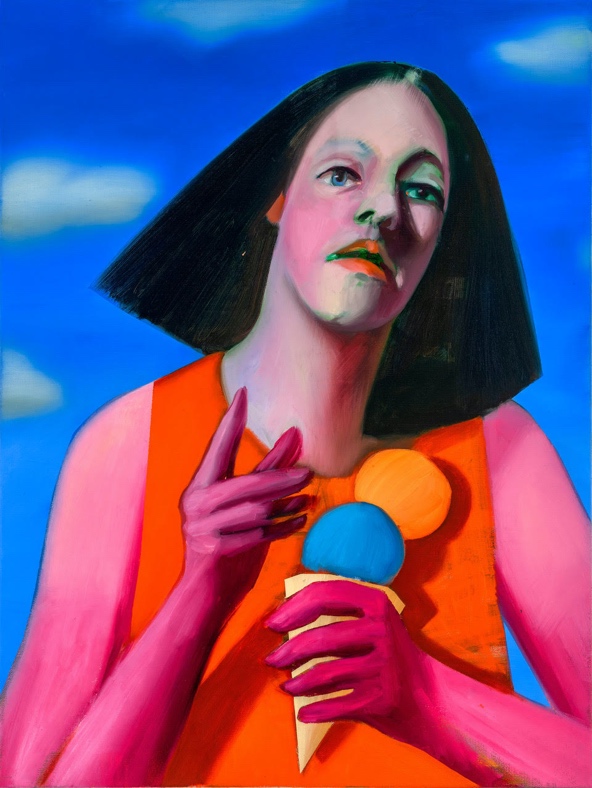 How we decide on the meaning of objects and how we assign cultural codes to them are questions revisited by many contemporary artists. In doing so they connect to an art historical tradition set in place from the time of Egyptians tombs when elements of flora or fauna had place in their mental maps; papyrus represented regeneration, while lotus was associated with a spiritual element. Similarly, in the Christian tradition and the cannon of the European painting colors stood as symbols, white for purity of intent and red for a sacrifice. Contemporary art uses a more complex approach because now artists are conduits of cultural heritage and engage with multiplicities of meanings. Visual codes they engage with strive to resonate with viewers through a mutual understanding of contemporaneity, emphasizing what is current and of value. But also contemporary artists engage with reevaluation of ideas and notions.

Two artists I interviewed for this article are both women, educated and based in Europe. What is interesting in their art is their ability to engage with familiar objects and bring a humorous, thought-provoking and narrative twist to them. They use portrayed objects rather than actions for their investigations thus intentionally restricting their viewfinders. By doing so they connect to the Surrealist sensitivity that it is impossible to have one ‘right’ interpretation. Because our existence is complex enough it defies all the logic. De Vivanco and Kindberg find visceral and emotional pleasure in this and invite us to do the same. 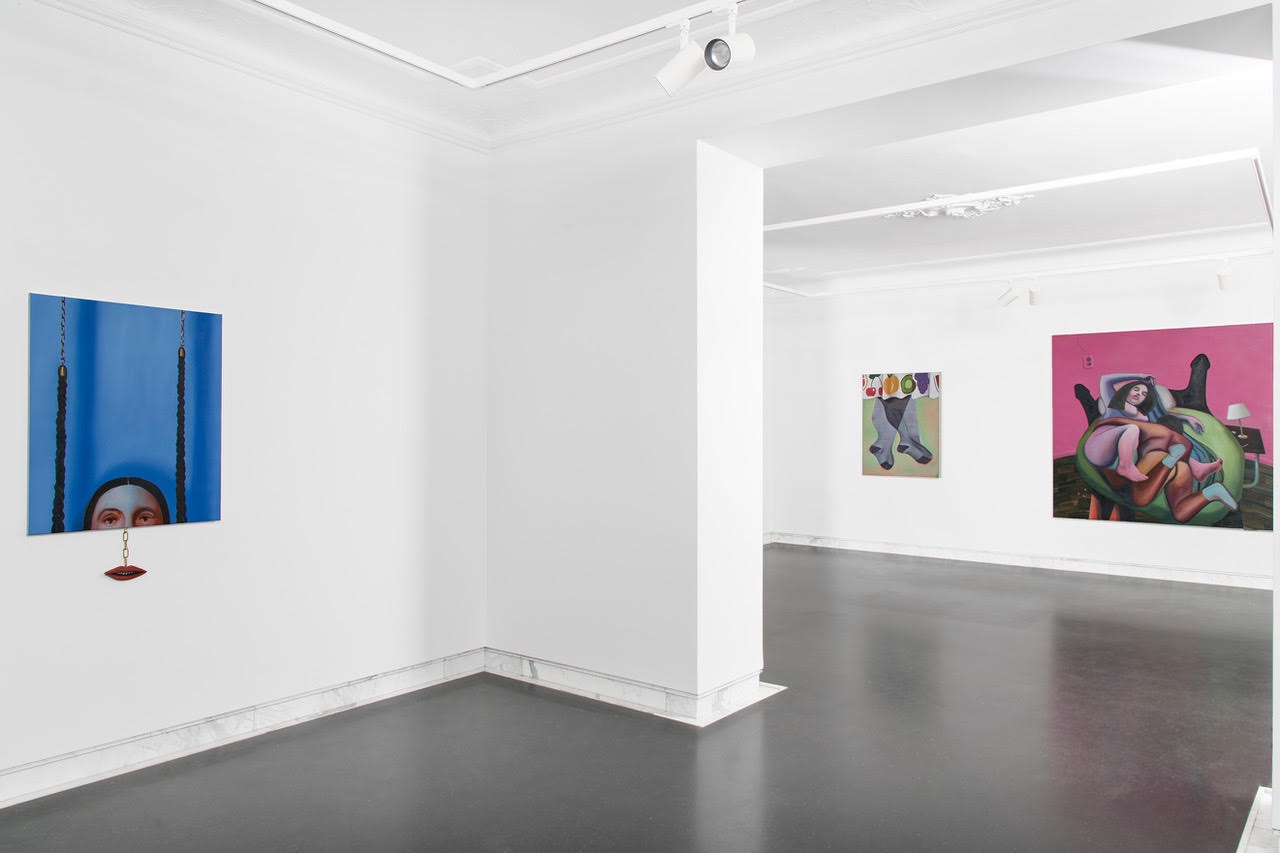 NINA MDIVANI: Can you talk a little bit about your artistic journey and how it led you to Berlin and London?

Ivanna de Vivanco: Well, I am from Chile and Peru. I always say both countries, as my mom is from Peru and my father is from Chile and I was born in a neutral territory: Portugal. I studied fine art at the University of Chile. That was a great place to study; the discussion and the level of the teachers was fantastic and I'm super happy to have had the opportunity to study there. Initially I had the dream to continue studying in Paris, but when I discovered the Academy of Visual Arts in Leipzig I was so fascinated by the tradition there and by the dialog between painting and graphic, that I decided to change my path. At that time, I worked a lot on paper and the interaction between these two media was something I wanted to engage with even more. In 2012 I finally decided I needed to get to know the art school in the flesh, so I took a portfolio with a selection of works under my arm and I flew to Leipzig. I knocked on the door and was lucky enough to meet the right person; Oliver Kossack. He liked my work and told me that I could come and that they would test me in situ for one year and then they would decide if I was accepted or not. So, I came! That was a hard year but very adventurous. In the end I luckily got a place at the school and could finally study in Leipzig. Now I'm in London for an exhibition, but I have been living in Germany since then. It’s already been almost 9 years.

NM: You are currently participating in a group show Error Explanation at 68 Projects, Berlin. Can you tell me a little bit about how you understand the concept?

Ivana de Vivanco: I think, reflecting on error explanations, for example, within history is something that in a certain way, all artists do. I am very interested in reviewing history and localizing some error explanations there. But of course, I'm nobody to say "hey, here I come with the right explanation". So, when trying to interpret or understand certain periods of history and things that might look like mistakes or that I think are really wrong, I might make error explanations through my works as well. I try to review these mistakes from history, but I'm not free from errors myself. So yes, I really relate to this title.

NM: Tell me about this particular work Santiago Mataindias Destronado that translates as Dethroned Santiago Mataindias. In a way this painting looks like a reinterpretation of an altarpiece. Through this iconic image you work with a traditional idea of Santiago, correct?

Ivana de Vivanco: Yes, the iconographic figure of Santiago is very fascinating to me. In the last couple of years, I have been reading a lot about the time of the first big European invasions around the sixteenth century and about anti-colonialist theories and I have realized how colonized my own head is, and everyone's head I guess. In this series of works I am reviewing an iconographic image that is a very powerful and painful symbol of colonialism. Santiago is known as the Indian Slayer and his image on the white horse killing indigenous people is very common in South America, especially in the Andes. I grew up in Ecuador, Chile and Peru, so I was confronted to his image in churches very often. I think it is interesting to review this religious figure. But of course, in my version Santiago cannot be sitting comfortably on his horse anymore. He has to fall. It’s difficult to treat these topics with a certain irony, distance or humor, but also very seriously. It’s always a challenge to find the right balance. In this painting, the white conqueror falls because of a gentle movement by one of the ladies. I wanted to celebrate the fact that this type of masculinity is starting to fall so easily nowadays. The big macho cannot feel saved on the horse anymore. 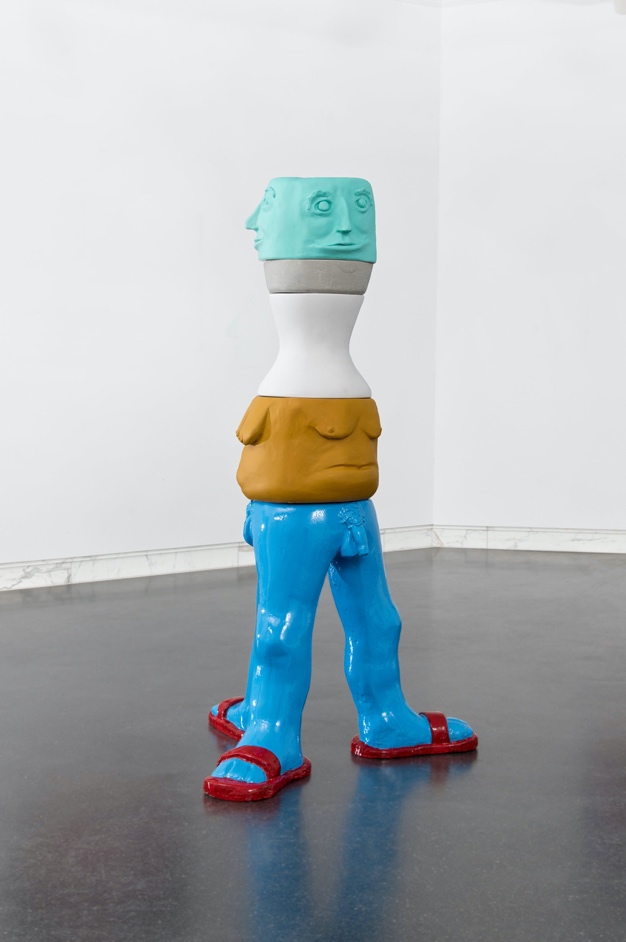 NM: Ivana, tell me a little bit about this composite work.

Ivana de Vivanco: This figure has multiplicity of sexes and each body part can be moved around and recombined differently. One just has to rotate the torso or the legs and the figure will have new multiple genders and still be happy with each one of the possible combinations. Of course, there's a statement there: we need to be more open. Happily, many artists are working in this direction as well, but my God, society still needs to learn that much! But there’s hope: I had a show recently where I had a similar work and there was a group of children visiting. The guide asked them if the represented figure was a lady or a boy and one child replied so naturally "it's both". All other children agreed. I loved that answer. 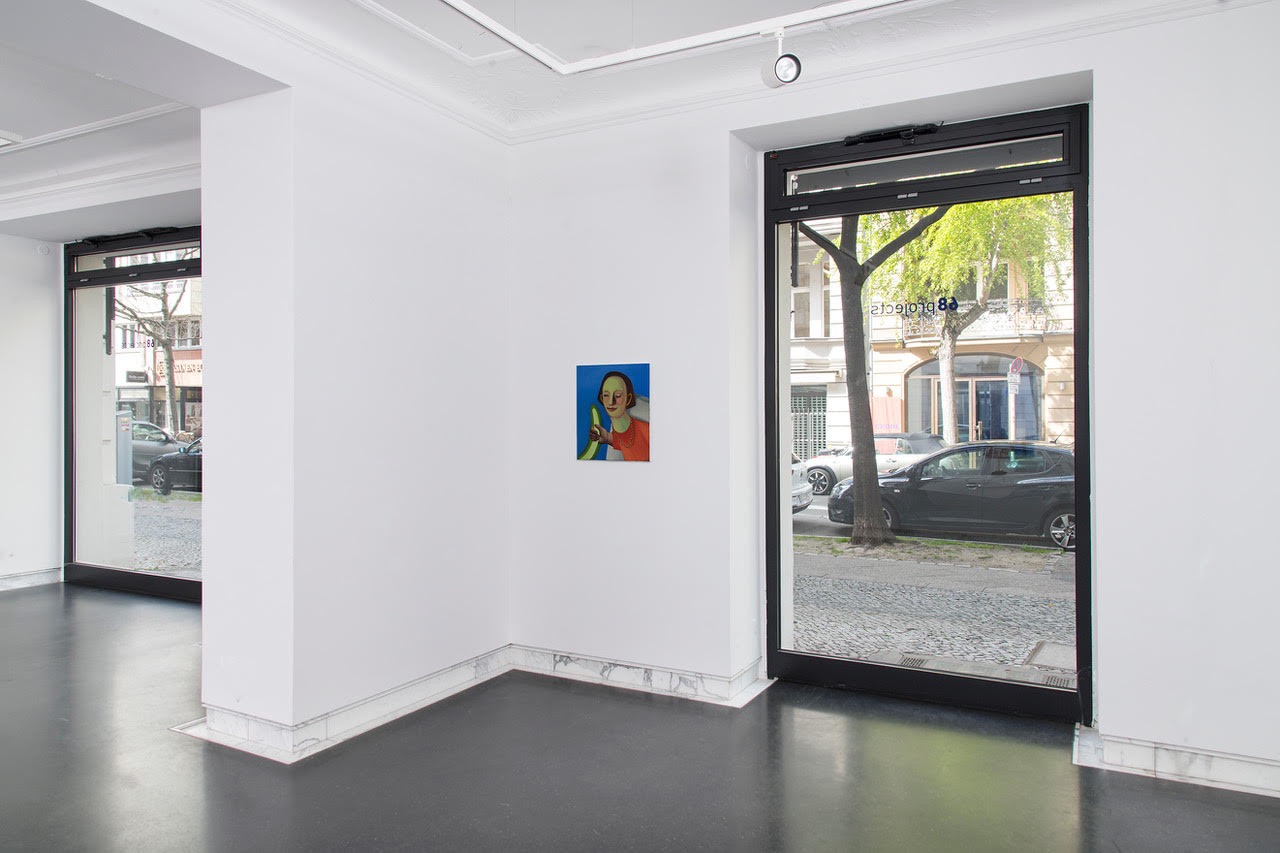 Nina Mdivani: Sally, you were born in Sweden, and then you went to school in London. What influenced your decision to move?

Sally Kindberg: I was accepted into the Royal Academy in Stockholm, but also, I knew Stockholm so well and I really wanted to try and see something else in the world. And that was much more of a challenge for me and a much more difficult road, to be honest, but I chose Goldsmiths and I did both my BA and my MFA there.

NM: How do you think about Error Explanation as a concept?

Sally Kindberg: You are always trying to conduct yourself as a human being. You always have to perform and you try to be your best, but like you slip on a banana skin or something happens, right? But you're not in control of anything really and things happen all the time. I just find it fascinating that I'm striving for control of my work, myself and everything, but life still just carries on and you have to be open to it as well. Later you analyze it and even the bad things are actually good things in some ways. They lead to good things, maybe often. So, yes, it's all intertwined. Isn't it? It's like yin and yang. 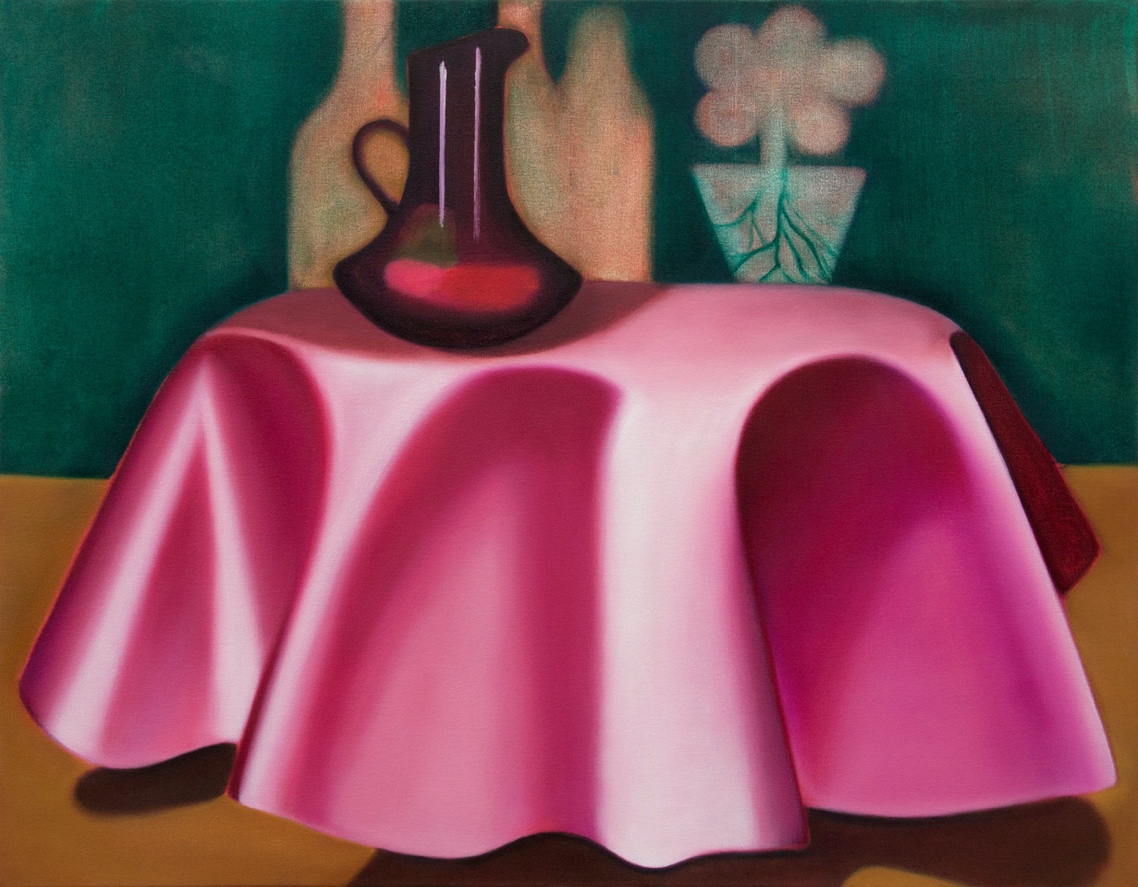 NM: It seems that a border between three-dimensionality and flatness is important for you as an artist. You seem to engage with it on a consistent basis. Also, here is a hot pink starchy tablecloth that some dedicated housewife tried to make super-presentable.

Sally Kindberg: Yes. It is just fascinating what you could do with paint. How images are constructed and how you can create a painting in so many different ways. I think about that all the time, how I make my decisions of different planes and brushstrokes, how I want things to look. With this painting it is funny because when I was growing up my mom made all the skirts and dresses for us, she saw a lot. And she made this really beautiful skirt, which she sprayed with a starchy spray and then ironed it. So, it's like a 1950s aesthetic.

And also, a pitcher, it was actually in another painting I did a couple of years ago. I really wanted to paint it again, but in a different way. So, this one is quite experimental, I had no idea that the background was going to be like that when I started, so I had the cloth and I had that bottle. And then the painting kind of developed from there. This always happens when the painting takes over. But I have some loose references, but I need to carry on painting until the painting is finished. So, the painting will tell me "I am not finished. You have to fix this." Until I know I am done. 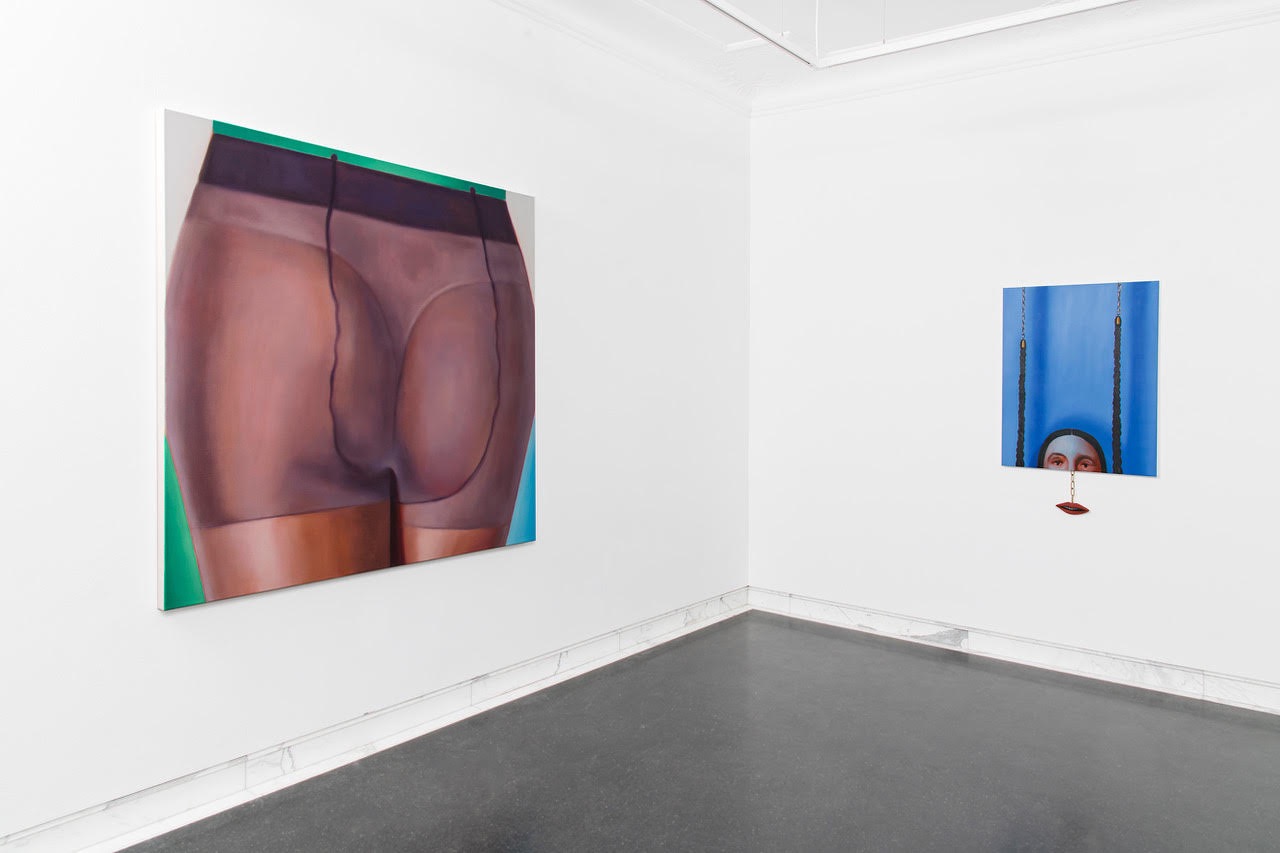 NM: How about String of Life, a painting with tights above? You have painted them before.

Sally: Everyone who goes clubbing knows String of Life tune, it is super-famous. Which is funny how you can connect that music with these tights, both having gravity and lightness. For me materiality of tights are fascinating, different tones that they have in relation to each other and to female bodies. And the composition of this painting, it is taking up the whole square, becomes almost abstract, but it is figurative.

NM: So, you look at an object and you think, "Oh, this is an interesting kind of texture to try to put it on the canvas or something along those lines?" But also going under the surfaces of what is so commonplace and every day.

Sally: Yes, to both. I mean, everything is there for us to see. WM

Nina Mdivani is Georgiani-born and New York-based independent curator, writer and researcher. Her academic background covers International Relations and Gender Studies from Tbilisi State University, Mount Holyoke College and, most recently, Museum Studies from City University of New York. Nina's book, King is Female, published in October 2018 in Berlin by Wienand Verlag explores the lives of three Georgian women artists and is the first publication to investigate questions of the feminine identity in the context of the Eastern European historical, social, and cultural transformation of the last twenty years. Nina has contributed articles to Arte Fuse, Eastern European Film Bulletin, Indigo Magazine, Art Spiel. As curator and writer Nina is interested in discovering hidden narratives within dominant cultures with focus on minorities and migrations. You can find out more about her work at ninamdivani.com