Marika Asatiani, Untitled (from the series Achara), 2006. Courtesy of the artist.

In the early twentieth century, Paris was the go-to city for serious artists and dilettantes alike. But further east, across the Black Sea, another thriving capital threatened to rival Paris in both ambition and innovation. Dadaism, the avant-garde, modernism, futurism – all these movements and more found an early and welcoming home in the balmy city of Tiflis (now Tbilisi), capital of the tiny Caucasian nation of Georgia, Russia’s neighbour (and former colony) to the South.

Yet like in so many other post-Soviet countries, Georgia’s art scene in recent years has been stymied by decades of censorship. With some notable exceptions (among them the haunting works of Merab Abramishvili and of former child prodigy Rusudan Petviashvili), Georgia’s output in the latter half of the twentieth century was dominated by State-approved propaganda, whose historical interest has long outlived its aesthetic value. Kitsch and slipshod imitations of nineteenth-century painters like Pirosmani and Elene Akhlevediani abound in the Vernissage, Tbilisi’s outdoor art market, alongside once-revered artists reduced to hawking their wares to tourists for a fraction of their former value. The Persian-style palace that houses the once-prominent State Academy of Arts is still standing, but only just.

Today, however, Tbilisi’s gallery scene is undergoing something of a renewal. Artists who have trained or studied abroad, often in Paris, are returning to their homeland. The dilapidated State Academy of Arts is under new management; its new (and first female) director, Irina Popiashvili, spent decades running a gallery in New York City. Underground café-galleries have begun to spring up in apartment-house basements on the city’s labyrinthine side-streets. Artists are experimenting with alternative media – Nino “Chubika” Chubinishvili, for example, bridges the gap between art and fashion with intricate embossed leather pieces that hint at a whole cosmology of angels and demons surrounding and inhabiting the wearer’s body, while Maya Sumbadze elevates the doodle into a powerful medium for pop-art.

One such up-and-coming Georgian artist is Marika Asatiani, recently returned to Tbilisi after several years abroad. A photographer with an uncanny ability to reveal the stark emptiness of her subjects, whether brooding Georgian youths, abandoned Soviet structures, or abstract installations, Asatiani unsettles and disorients the viewer, playing with the dynamic tensions inherent in stillness, exploring what she calls the idea of “places as process, rather than something static and physical”.

To learn more about Asatiani – and about the challenges Tbilisi still presents for the artists who call it home – I interviewed her via a series of emails in September, 2012.

Tara Isabella Burton: How would you describe your process as an artist?

Marika Asatiani: I am trying to articulate subtle human experiences and ask the following –what is the meaning of words like ‘space’ and ‘place’? What is space? Do you ever experience it? What is the relationship between space and place? In [my] experience, the meaning of space often merges with that of place. Is undifferentiated and un-oriented space possible? Is there a spatiality that is not organized by the determination of frontiers?

Therefore, I [work] to use photography as a tool to research dynamic ideas about issues of spatiality; to develop my practice in such a way as to present places as process, rather than something static and physical [and to] explore not only one position, one perspective, [one] fixed center but a passage, which escapes localization and needs to be endlessly articulated. In our everyday lives, we are cluttered with images, with material objects. Therefore, I would like to explore not the[se] images/places but [rather the] space that makes these places possible. Something that is ever elusive and hard to pin down, since it is immaterial, intangible; it reminds me of [the] traditional beginning of many fairytales – “There was and there was not.”

Also, I regard places not only as a manifestation of physical, object-based world, but also as something beyond the reach of our ordinary perception, full of intangible ‘things’, pulsations, layers. [When I focus on the] shifting fixity of places, questioning their stability, I am attempting to destabilize ‘the fixed place’ in a non-violent, subtle manner and maybe point at the perceiver as a main figure who makes the world appear as it is, and through whom [the] act of perception is possible. Through repetition and certain arrangement of similar images, I [create] situations that are expressed with minimal means, whereby the viewer experiences himself, his own being in [the] here and now, along with the work he is facing. In this way, the gaze/perception is…redirected from the object/image back to the viewer as he… stands in front of the work or moves from one position to another. Ideally, it should be a direct and intimate experience, unmediated by conceptual knowledge…sensed [rather] than rationally understood.

Marika Asatiani, 11 currents of air, 2012. Fishwire, plastic; the work concerns the paradox of stillness and movement. Courtesy of the artist.

Burton: Which of your work best represents your personal artistic approach or style and why?

Asatiani: I don’t know if I have’ a style’, I think it changes over time; today one work might best represent my practice, while another work [might best represent it] tomorrow, depending how my practice develops. It’s not really up to me, I find [the] creative process completely unpredictable, it depends what ideas come into my head.

Burton. Could you tell me a bit more about your background and training?

Asatiani: I studied sociology at the university in Tbilisi (BA level), and LSE, UK (MSc). But it was a long time ago, and I was never really interested in it. I was more interested in philosophy and psychology, so my art today has no connections with my previous studies. In 2009-10 I did my two-year residency at the Rijksakademie for Visual Arts, Amsterdam.

Burton: How do you think Georgia's art scene has changed in the past decade or two?

Asatiani: I don’t really know, because I never belonged to the Georgian arts scene (I did not go to the Art Academy in Tbilisi and I’ve also been away for the past four years) - but at the moment I don’t think there is any scene at all. [Rather], there are mostly individual artists working by themselves.  There are no contemporary art galleries in Tbilisi, in a Western sense, which would represent artists both locally and internationally, and make interesting exhibitions and sell their work. Basically, there is no market for contemporary art, and the government does not see any value in developing and supporting local contemporary art scene. But it’s mostly because of [their] ignorance of contemporary art, and its lack of value in society, rather than some kind of ill-intention or censorship. Art and everything associated with it has not developed in Georgia in the same way as in Western Europe or the US, so it’s not [a natural part of contemporary] Georgian society (Stalin killed or forced to leave everyone in the arts who was progressive and avant-garde, thus horrible break took place in the development of Georgian culture, entire generation perished, those who were capable of contributing to culture, or to transfer their knowledge to further generations). Everything has to be artificially implanted now, if one wants any developments in this regard.

Burton: What other Georgian artists influence you? What about artists worldwide?

Asatiani: I don’t know if I have any particular influences (none Georgian though); at least that’s how I think and I also don’t have any favourite artists. I like certain works by certain artists however. I find that American Art of the 60s and early 70s deeply resonates with my current interests. I find approaches in contemporary Dutch art photography interesting too… I also like many works from the artists that were part of the Rijksakademie in Amsterdam.

Burton: Is Georgia - and Tbilisi in particular - a dynamic place for artists today? Is it possible to make a living as an artist there?

Asatiani: No, it’s absolutely not dynamic, and you can’t make any money from contemporary/conceptual, etc., art in Georgia, unless you’re a painter ([as] understood in a traditional sense), but certainly even in that case, you can’t live off that. So, for now, it’s quite a hopeless situation.

Burton: A particularly ‘hot topic’ among the Tbilisi intelligentsia lately has been President Saakashvili’s renovations of the Tbilisi Old Town – rebuilding facades of historic buildings in perhaps hastily-conceived approximations of the original style. These renovations and rebuilding projects have proved particularly controversial among Tbilisi’s younger generation – many of whom see the project as indicative of shifting values (indeed, objections over the renovations of the nineteenth-century Gudiashvili Square in the Sololaki district gave rise to an “Occupy Gudiashvili” movement that ended up turning into an impromptu outdoor art exhibition). What are your thoughts on the renovation of Tbilisi's historic districts?

Asatiani: It’s nice that they are renovating the districts, but it should be done with much greater care, and knowledge, and consideration of historical sketches, plans, photographs, and also better technology of renovation. But you can’t ask for something that is almost impossible for Georgia – it has no tradition of renovating buildings or entire districts, while preserving the historicity and old vibe. Also, there is no understanding and appreciation of urban planning in this country (it’s a problem of historical development) there are certain things people are absolutely not aware of in Georgia (I mean in terms of aesthetics, sense of the context, scale [and so forth]. ), while in Western capitals it would be completely natural. But even there, in some cases money buys it all. 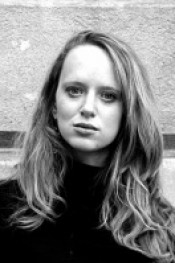 Tara Isabella Burton is a writer and grad student living between Oxford, England, and Tbilisi, Georgia. She previously been published in Kunstpedia, Relief, SubtleTea, All Rights Reserved, and The Huffington Post among other venues, with work forthcoming in Literary Traveler, Gigantic Sequins, and The Eunoia Review. Her website is http://www.taraisabellaburton.com