Kelela performing for an event hosted by Pérez Art Museum

In and Around AMBM (This article was written in conjunction with ABMB 2014.)

Arriving in Miami on the evening of December first, I made a beeline to the beach for a VIP preview of Untitled. I was pleasently surprised to find that this fair, which has only been going on since 2012, featured a large number of non-profit spaces and focused mostly on emerging and mid-career artists' work. Here, I was drawn in by the booths of project spaces like Komplot (Brussels), SIC (Helsinki), and found Sandra Vaka Olsen's digital prints of liquid condensation on lcd screens at the Loyal Gallery booth (Stockholm) particularly evocative.

After checking out the Untitled fair, I headed up the beach to the joint PIN-UP x Chamber Magazine dessert reception. The event presented a series of confectionary sculptures, around which guests hovered, downing champagne while impatiently waiting for the moment when they could pounce. As skillfully crafted as the edible pieces were, however, I found the nuanced, musical backdrop created by the Paris-born, Brooklyn-based artist, LaFawndah far more engaging.

On Wednesday, I spent my day navigating through the Art Basel Miami Beach fair, rushing from booth to booth, stopping only momentarily to refuel at Naomi Fisher's Danarchy Refuge before continuing on.

Early that evening, I dropped by the glitzy opening of Peter Marino's curated group show at the Bass Museum before heading to 24/7, a Rail Curatorial Projects exhibition at the Montecarlo Hotel. This show, organized by curators Alex Bacon and Harrison Tenzer, inserted pieces into the hotel context, decking out two full suites in work. Compared with other presentations I had seen that day, this felt refreshing and piognant, acknowleding the pervasive quality of the fair.

Thursday morning began with a Ruinart-hosted brunch, celebrating a collaboration with Scottish artist Georgia Russell. Among the many in attendance were other other artists, including London-based Ryan Gander and New York-based performer Melanie Bonajo. From there, I continued on to the NADA preview, pausing like many others at the Tomorrow Gallery booth to trace the insects through Brad Troemel's hanging ant farms before moving on.

That evening, the Pérez Art Museum hosted a special one-night event launching their season of art and music collaborations entitled Waves. Featuring musical performances by Kelela, Total Freedom and the Future Brown, against a backdrop of flyboarding performances choreographed by DIS magazine, this event was one of the biggest spectacles of the week.

As things began to wind down on December 5th, I decided to take advantage of the ABMB film program. On the night I attended, short pieces by fifteen artists including Theo Michael and Cecile B. Evans were projected across the side of the Miami Philharmonic building. Tons of large beanbag-like chairs covered the grassy park, providing a relaxing viewing experience. Set to an evocative, steel drum soundtrack, Evans's quirky piece The Brightness was a highlight. Free and accessible to everyone, the film program engaged the public in a way that I didn't see other events do. To say the least, it was refreshingly open in contrast to the exclusivity of most of the week's events. 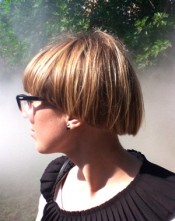 Emmy Skensved is a Canadian artist currently based in Berlin, Germany. She holds an MFA from the University of Waterloo and a BFA from OCAD University. She has exhibited her work across Canada and Europe, including solo shows at Greener Pastures Contemporary Art in Toronto and September Gallery in Berlin. Her review of Kathrin Sonntag’s Double Take at Galerie Kamm won second prize in the 2011 C Magazine New Critics Competition.