There is a tendency today of showing older artists under a new light. Although numerous art schools are pulling out many young and promising talents, although the New York art scene is still blooming, many galleries and curators are re-discovering artists from older generations, showing them in a contemporary context to offer a new perspective on their works and thereby strengthen their position in the tight net of the art market. There is much more to say about this trend, but an exhibition I recently saw at TOTAH Gallery did in fact show two established and well-known artists under a new light. And it was a surprisingly eye-opening experience.

The brand new space in the Lower East Side hosted the exhibition Verba volant, scripta manent featured 56 arazzi by Alighiero Boetti and 12 paintings by Mel Bochner, all of which filled the rooms with color, energy, and, ultimately, lots of words. Looking around, I felt a strong correspondence between the loud and winged words in Bochner’s works and the more quiet and elegant embroidered sentences in Boetti’s; I tried to make a connection between them and the title of the exhibition, which means, translated from the Latin: Spoken words fly away, written words remain. I learned later in a conversation with David Totah that there was no intention of a literal interpretation in the title. The decision to show these two artists together was instead based on the fact that he personally know how much their lives crossed in many different ways.

Boetti was a good friend of the Totah family, so David Totah became connected to Boetti’s work at an early age. Mel and Boetti actually met in Turin many years ago; they went to the movies where, though Mel did not understand a word, they established a great connection. Although they never met again, they still exchanged works. They were also born in the same year, 1940, and both worked as conceptual artists in the sixties — not an easy time. Both artists worked with and on fabrics (the one embroidering the canvas, the other painting on velvet) and with signs and symbols (letters, numbers, and language in general). Boetti’s concepts are more mystical, his style soft and elegant, while Bochner’s works are more direct, loud and bold. Both artists demonstrate an analytical attentiveness to the ambiguity of communication, and play with it: Boetti in a subtle way, Bochner in a direct way. Their respective work habit can be interpreted as mirroring their cultures of origin: Boetti’s Italy, an aesthetic culture, versus the America of Bochner, who takes a more sensationalistic approach. For both artists the manual aspect of art making is very important, and so is the question of color relating to a specific letter or symbol. Bochner’s works are meant to be experiential, rather than an illustration of his ideas, while Boetti conveys wise advice with a double meaning that works more on the conceptual level.

It is not easy for the viewer to immediately decipher Boetti’s witty, but also meaningful sentences. The letters are set in different colors into the squared canvases from top to bottom, and the reader has to unpuzzle where one word ends and the next starts.

Some of Boetti’s works seem to be self-referential, evidencing the underlying practice of creating and embroidering sentences restricted to a predetermined number of available letters, while others sound more like maxims that should guide our conduct in life. We can read in all the works an understated dual meaning, which keeps the viewer busy in her thoughts. There is always a literal meaning and a then an underlying, more abstract one. And this duality, ultimately, is a further connection to Mel Bochner, who plays with words and language in a diametrically opposite way. Instead of using words to communicate a deeper thought, he directs attention to their emptiness, to the total lack of meaning in contemporary communication.

Compared to Boetti’s quiet canvases, Bochner’s paintings on velvet are loud and direct. Their letters take on lots of space and appear like a mural in the suburbs, written secretly but intended for public communication. "Nothing" (2006), "Complain" (2009) and "$#!+" (2015) are works that address, in a poetic yet volumetrically massive way, issues of our society. "Blah, Blah, Blah" (2015) is probably one of his better known series, which speaks in the strongest way about language emptied by oversaturation. “While there is no escaping this linguistic tsunami, the Blah Blah, Blah paintings subvert it from below" [1]. And yes, Bochner speaks to us from the bottom. The words thickly emerge, not only because of their shape and the materiality of paint, but also because of their coarse, unmediated form. The medium is the message [2] is not enough anymore; now sign and design have collapsed into a fundamental role.

I can’t help but think of how the works of both artists address new and complex ways of communication, especially in the digital realm. I can, for example, connect well to Boetti’s 1985 work "La Persona e Il Personaggio" (“The person and the personage”); and  when I think on current discourses about ourselves in and outside of Social Media, Boetti’s "Amazare Il Tempo" (“Killing Time,” 1984) seems like a clear reference to the use and abuse of posting to facebook just to fill out empty time.

Simultaneously, when I look at Bochner’s "Thank You" (2015) or "Obscene" (2006), I think about the obsessive positivity and bold language that is implied in our manner of over-communicating, which aims to arouse interest rather than to convey real content. Indeed, in our times, where we have the mixed blessing of being able — through technology — to exist and to appear concurrently and everywhere, we are also more and more adrift in an ocean of contentless information and images. The perception of ourselves is determined by the approval by others (e.g. likes or feedback). As a consequence, we have to face a loss of identity, if not worse: the loss of identification with the inner self.

These artworks, with their dual aspects and timeless beauty, remind us of who we are, where we are and what we should not forget about ourselves. We can assume that Boetti did not consciously think to address these issues, while Bochner was decidedly striding toward them. At bottom, there is a huge emotional impact in discovering such parallels in works of art that have been realized in another time period. The works of both artists are a material record of uniquely actualized thoughts that will survive the ephemeral world of spoken letters.

The exhibition has since been deinstalled to make space for the current one, but some of the works can still be seen in the private rooms of the gallery.

The current exhibition Light Unveiled features the late works by the Italian architect and artist Lauretta Vinciarelli. Often described as a true visionary of architectural space and landscape, Vinciarelli, a much-loved member of the architectural avant-garde, participated in an era of intense urban investigation. While serving as professor at Columbia University (GSAPP); Parsons School of Design; Pratt Institute and City College of New York, she simultaneously dedicated herself to a private practice of sculpting luminous portraits in watercolors, devoid of figures, suggesting existence both before and after time.

Her drawings elevate almost familiar spaces to a very emotional level, touched by light and magic. The simplistic style of her projects are reminiscent of the fascist architecture of her Italian hometown Rome; but instead of offering a cold and intimidating perspective, they are warm and inviting. The colors and forms are similar to Donald Judd (Vinciarelli’s decade-long partner), Dan Flavin and James Turrell, and the viewer can feel her proximity to them, especially in the use of light to build architectural forms. Nevertheless, the perspective on scenarios, as well as the combination of color fields, speak totally for her own style.

The exhibition at TOTAH is installed along the two exhibition rooms as a chronological survey of Vinciarelli’s works, spanning almost two decades of creation (from 1990 to 2007). While walking through the exhibition and admiring first the older, then the newer drawings, the viewer notices that with the passing of the years her works evolved from detailed interior habitats to more open descriptions of space, within which interior and exterior merge, expressed through fields of colors and beams of light, invoking a spiritual experience rather than a mere representation of space. In her search for light through color (or vice-versa) and the representation of time’s absence, Vinciarelli went further than her colleagues, creating in each work a unique experience of different levels of consciousness correlated to the presentation of apparent opposites.

The Lauretta Vinciarelli exhibition will be on view until September 18, 2016, marking an important aspect of the gallery’s concept, which includes long-term exhibitions that will give audiences time to effectively engage with the art and the artists. The gallery’s programming will also be set against a backdrop of public events that have the aim of bringing audiences closer to the works, in addition to functioning as an educational platform and gathering place not necessarily limited to exhibition programming. WM

Concurrently with Lauretta Vinciarelli's exhibition, through September 18, TOTAH Gallery will offer a free screening program titled 8’19." Paying tribute to light, the most ephemeral of media, 8’19” is organized by Laurence Kardish (former Senior Curator of Film at The Museum of Modern Art) with the assistance of independent curator Sarah Lehat. Screenings take place Thursdays and Sundays, July 28 – September 18 at 6:30 p.m. Admission is free. Seating is limited. 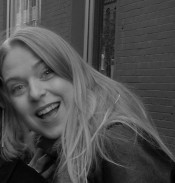 Doct. Sarah Corona is an independent Curator and Art Historian based in New York. One of her main interests is to discover how technology affects art and culture and the cultural diversities between the European and American society.