Marlborough Gallery presented “Hugo Fontela: Nowhere Island,” an exhibition of new mixed media paintings whose enigmatic title conveys an air of mystery that stirs curiosity on the metaphysical issues inherent in the unusual leitmotif.  In an era in the art world when individuality has long been depleted by appropriation, when trends devised with no evident antecedents rule, and cronyism perpetuates outdated art modes, a fresh voice is a lifeline. As the art market is increasingly distorted by inflated commercialism, and only the top of the highest end art stars flourish, it is noteworthy that with clarity and cogency, Hugo Fontela offers a symbolic vision that explores associations which lead to speculation on the very essence of being and existence, in pared down pristine environmental formats.

Seen from slightly aerial views Fontela’s imaginary islands exist in undefined locations, isolated from familiar landmarks. The sea reaches to the four edges of the picture plane, focusing viewer attention on a single motif whose very isolation makes it ideal for audience contemplation.  Fontela modulates his select color choices of white and blue, in compositional structures that eliminate notations of time beyond the basic rhythms of day and night. In order to formulate his imagery, the artist employs a composite of pictures and notes on places that spur his curiosity, to arrive by the manipulation of the painting media at his final honed island shapes.  These forms are articulated by careful rendering of soft, light touches that create the volumetric structures that pivot slightly to differentiate each piece, while they maintain their core position. The continuity of imagery elicits a sense of stability and resilience. Refined modifications suggest further that although change may be virtually imperceptible it remains life’s sole constant.

The paintings are not condensed in a barren reductive mode, but distilled with positive “empty” space that is devised in layered paint with subtle textures and shadows.   By limiting his focus, Fontela highlights his painterly applications of warm cobalt blue edged with black washes, which anchor the spherical “Nowhere Island” rocks in their austere vital site.  Shadows play a role in narratives of solemnity and solace, which arise from the resources within one’s inner being.  Here the only company to be found is the deep blue of the encompassing seas.

In Jungian theory rock symbolizes the “self”; here it seems the artist speaks to the isolated existential nature of the human condition that persists, despite the shallow “friendship” in contemporary life that social media and TV offer. One can posit that while one has clarity of mind, one is never entirely alone; even during sleep the unconscious creates new domains of dream states peopled with puzzling or thought provoking narratives, not unlike Fontela’s rock island imagery.  At first glance, the protuberant rocks bring the Greek “Myth of Sisyphus” to mind.  In a correlation with the routines of everyday existence, Sisyphus is condemned daily to push a huge rock to the top of a hill, only to see it roll back again through an eternity in Hades.  It is said that the myth symbolizes humankind’s efforts to conquer its material cravings.

In some of the paintings there is a flickering field of white laid over the blue-black layers of the sea, that resurrects feelings of hope and transcendence that call a possible afterlife to mind. The white areas conceivably recreate topography of bliss in the context of eternity.  The works encourage a sense of seriousness and contemplation linked to Chinese scholar’s rocks, regarded as replicas of the universe; Fontela’s aesthetic also recalls Japanese rock gardens designed to emulate nature’s serenity. Rock symbolizes permanence, security and stability in both the Christian and Daoist religions. The shift in the rock of each format produces varied shapes that indicate growth in the character of the rock island.

Fontela displays the courage of his vision with no trace of timidity in unique works that express a sense of equanimity, of coming successfully to terms with the inevitable. These are works of visual art; they are not conceptual in the sense that they do not illustrate a narrative text that explains information not readily related to the imagery at hand.  The paintings are open to interpretations that may trigger links to personal feelings or experiences. These will differ among the individual viewers who connect to and appreciate the deeper implications of these works. The artist’s sophisticated mixed media paintings are visually rewarding, and intellectually absorbing on many levels. WM 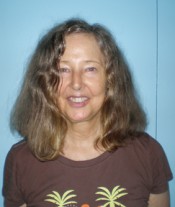 Mary Hrbacek is an artist who has been writing about art in New York City since the late 1990s. She has had more than one hundred reviews published in The M Magazine/The New York Art World, and has written in print and on-line NY Artbeat.com, Artes Magazine, d’Art International, Culture Catch.com and Whitehot Magazine. Her commentary spans a broad spectrum, from the contemporary cutting-edge to the Old Masters.

Visit our postings and listings section