How inconvenient that the term Impressionism is already taken. With her translation of images through fleeting particles of composite light, if Impressionism had no previous stylistic connotations, it would be a fitting word to characterize Annie Lapin’s recent work. The nine paintings in Various Peep Shows at Honor Fraser Gallery are filled with impressions and implications of scene, suggestions of landscape, and architecture, flowers, foliage and form -- all glimpsed through an almost abstract vernacular rendered by deliberate, strategic, application of paint. Like an Impressionist, Lapin captures the subtle modulations of color that make up the way the eye perceives an object or a space. She hands us an illusion, a version of imagery, that leaves the viewer wondering what they have actually seen.

In a 2011 video, Lapin reveals the intention behind her process. “From the moment I started painting, it was always about obfuscating something obvious… The way I’m constructing the painting is using these fragments of something that is verging on descriptive -- and then interrupting it,” she said. Lapin’s carefully choreographed approach, alternately revealing and concealing the narrative clues, is part of what makes her paintings so beguiling. She disrupts the descriptive details with a variety of techniques: bold and broken brushstrokes, spray paint, rag-rubbed surfaces, and even blurry finger-painting.  “I want each painting to be something that really unravels over time,” Lapin said.

In one of three larger works, Various Peep Shows (Through), (2013, Oil and acrylic, enamel, spray paint on canvas, 82 X 78 inches) there is a sense of a vista seen through the framework of an architectural structure. A fragmented view of landscape appears in the background, along with a simulacrum of flowers. There is rawness in the work, openly baring aspects of the artist’s process. Thinly glazed sections of diluted paint contrast with thick ridges of pigment likely rendered with a palette knife. Lines of red spray paint resemble graffiti, but contain no verbiage. The essence of a garden in the late afternoon light seems to pervade another of the larger works, That Looks In and Out. Perhaps we are looking through a window frame. Hints of an unfocused scene interplay with a large incongruous gray-black mass dominating the center of the canvas. Orange and red graffiti-like letter fragments, rendered in spray paint, weave throughout the composition. The vague architectural references, the muted blue hue that by default connotes sky, and the flowery splashes of color, all lend subtle hints of context. In spite of the contextual references, it’s more interesting to assume nothing, resisting the impulse to draw conclusions based on elements of composition we seem to recognize.

Lapin achieves textural variance by applying a mixed medley of techniques to one of the narrow, vertical pieces, Through Comes. Washes on the lower half of the canvas contrast with a more intense flurry of brushstrokes in the upper section, suggesting a profusion of flowers spilling over the top of a fence. The effect is rich, but Lapin arrives at it with her own characteristic brand of subtle understatement. It was revelatory to learn that Lapin wanted to become an archaeologist from an early age, and actually launched her university career as an archaeology major. Being aware of this aspect of her background adds resonance to her work, as a sense of archaeological ruins permeates her paintings. A recurring theme, this intimation of ruins lends an air of timelessness to her work, along with another layer of meaning.

Puffy Light is composed of layers of thinly applied washes in sections of gray, rose and blue tones within a somewhat defined border on the right. Thin layers of blue, gray and brown, pool into a sort of puddle shape at the base of the frame. There is a suggestion of leaves. It’s almost immaterial to what degree the images are meant to be realist -- clear representational references notwithstanding. More important is the unexpected outcome, which succeeds in conveying something meaningful and profound about the interaction of color, the nuances of texture, and the effect realized where shadowy form intersects with light. There is nothing obvious about Lapin’s approach. Her work is deconstructed in the very act of being created, producing a mystique of both form and content, and an aura of unpredictability. It is precisely the latter element, orchestrated with such purpose by the artist, which holds the viewer hostage to its resolution.

Annie Lapin, That Looks In and Out 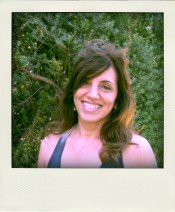