Chantal Joffe's spare but riveting portraits of women reveal volumes about their essential attitude towards themselves. Past portraits have often focused on quirky clothing and accessories, whether fashion items, or, in some cases, children. In her current show at Cheim & Read, Joffe hones in on something else: how a female feels in her own skin.

These large-scale portraits, a few flat and controlled, most painted with areas of big drips and thick impasto strokes, show a dozen or so women and girls, including Joffe's daughter, Esme, all in poses ranging from confident to cockily defiant. The show opens with a huge portrait of a woman with loosely splayed legs. But Redhead in a Garden Chair (2017) comes across as neither suggestive nor seductive, but instead as overtly comfortable. The woman's green eyes glance to one side, and, as in many of the portraits, the top of her head cannot be seen, since the canvas ends high on her forehead.

In contrast, Bella Standing (2016), a tiny, delicate painting of a friend's daughter, shows a 9-year-old girl, naked to the waist, wearing only black panties. She stands with legs tightly crossed, hands self-consciously or protectively clasped in front of her crotch. There is nothing libidinous here, Balthus-style; this image is innocent of any prurient insinuation. But comfort in one's own skin, it would seem, is something acquired with age.

Or is it? In the next room, Highbury Girl (2016), a young woman smartly dressed in a light jacket and blue shirt, also has her hands crossed on her lap. Her expression is dubious. Is she simply blank, or a bit lost? Next to her is one of the exhibit's showstoppers: a full-body self-portrait of the artist, nude except for a fake fur coat (Self Portrait in A Fake Fur, 2016). Her expression is dour, even angry or critical, but there is no self-consciousness whatever about her naked body and bare breasts. "Here I am, take me or leave me," the portrait seems to declare.

In Yellow Slacks (2017), a brunette with a cigarette at her lips, commandeers the canvas. She sits on her chair as if it were a throne, one foot propped up on its seat, her bent knee supporting her elbow. Brunette in a Pink Suit (2016) stands tall, hand tucked Napoleon-style, looking totally self-contained.

Two stunning portraits dominate the back room. Bella on Red (2016) is almost the diametric opposite of Bella Standing. Here the girl looks completely at ease. Still naked to the waist, she is wearing blue panties. Her arms hang loosely by her sides, and her large brown eyes in her round face, with its endearing freckle on the left cheek, gaze candidly at the viewer, playfully reversing the notion of the "male gaze."

Across from her is a large self-portrait of the artist with her daughter, Self-Portrait with Esme in a Striped Nightie (2016). As she has in the past, Joffe pays homage to Alice Neel in her subjects' pose, their psychological attitude, and even in the palette. In the painting, Joffe, wearing only panties, sits on a bed, (one hand, fingers oddly spread, Neel-style, on her thigh) side-by-side with her daughter, who is wearing a blue-striped nightgown (reminiscent of the blue-striped chair seen in several key Alice Neel portraits).

Joffe depicts herself as totally focused on her daughter, who does not reciprocate the attention, but rather patiently tolerates it. The mother's possessiveness and the child's measured, slightly quizzical response are clearly telegraphed by their body language.

Joffe continues to strip her already highly-reductive imagery down. But this distillation only amplifies its intensity. Whether she is depicting Esme neatly defined in a green Tartan coat, in a flat, graphic technique suggestive of Alex Katz, or pulling out all the stops, as she does in her big mother-daughter piece, Joffe's portraiture exerts its own particular power. WM 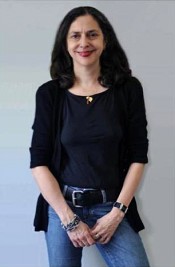 Phoebe Hoban is an American journalist perhaps known best for her biographies of the artists Jean Michel Basquiat and Alice Neel. Her most recent book is "Lucian Freud: Eyes Wide Open," 2014. Her Basquiat biography, "Basquiat: A Quick Killing in Art," came out as an e-book in May 2016.

Visit our postings and listings section