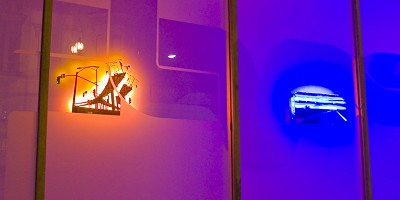 by Benjamin Pezzillo for whitehot LA

If New York City is where you can’t be an artist without a trust fund, then Los Angeles is where you can’t be an artist with one. No scene captures Los Angeles' art as lifeblood, not lifestyle mentality more than downtown’s burgeoning Gallery Row. Unlike other Los Angeles art spots Gallery Row not only mixes emerging artists with the well-established, it also separates people from the insulation of their home-bubble to car-bubble to work-bubble Southern California existence through its regular Art Walk event.

Organized by Gallery Row pioneer Bert Green, Art Walk happens the second Thursday of every month. Currently 26 art venues, all within walking distance of the Museum of Contemporary Art, time their openings and extend their hours so school groups, professionals getting off work and the hipster nocturnal crowd can venture into downtown’s Historic Core neighborhood en masse.

A typical Art Walk attracts 500 people or more to the area (and we aren’t talking about the remains of Downtown’s Skid Row seeking free wine). With new watering holes and dining spots sprouting up regularly, many 'Walkers' make it a night out rather than a drop-in on the way to some other destination or event.

Avoiding the cold exteriors and blank interior look of most contemporary art galleries, Gallery Row venues often turn the space itself into part of the installation's message. The current exhibit at Bert Green Fine Art, Ecuadorian artist Eduardo Villacis’ "Smoking Mirror", revisits Anglo-American history by displaying art, artifacts and fragments of a fictional vanquished people in the gallery which has been redressed as a mock museum set.

Just across Fifth Street another Gallery Row pioneer, the cooperative painting gallery Pharmaka, covered its walls with blank canvas and invited painters to contribute their take on the state of contemporary painting in Los Angeles.  The show, called "L.A. Ethos", attempts to answer the question, "is there something defining, something particularly ‘Angeleno’ in style, content or aesthetic approach that unites the contemporary art being made in the area?"

But perhaps nothing demonstrates both the potential and the spirit of the scene more than Phantom Galleries LA. The project, headed by Liza Simone and modeled on a similar one in San Jose, takes empty storefronts and turns them into temporary 24/7 public art galleries. In essence, art fills the voided spaces of a neighborhood making its transition from long-neglected commercial space to residential loft conversions.

Besides painting, the Row is rich in contemporary photography and digital art.

Photographer Meg Madison's "12.26" project, showing at the Kristi Engle Gallery in the Spring Arts Tower, portrays discarded Christmas trees so vividly you will swear you smell pine in the air. At Gallery de Soto on Second Street, artists Joaquin Trujillo and Brian Paumier's "Mars on Earth" transforms editorial photographs of a space fantasy camp for adults in Utah's Mars-like terrain, into what could easily be interpreted as a commentary on how our planet might look like after cataclysmic global warming.

Three floors below Kristi Engle, Niche.LA focuses on digital video presented in a quaint theater space and hints that they know of a group who will begin to stage underground happenings of live video mixing projected onto the blank walls of nearby buildings.

Around the corner from Niche.LA, and part of the Pharmaka and Bert Green encampment at Fifth and Main Street, is the Los Angeles Center for Digital Art. Founded by digital artist Rex Bruce, LACDA's annual "Snap to Grid" open call show brings over 600 entries from around the world which are all printed and shown in a massive, alphabetically ordered collage on the gallery's walls. Bruce's own Lo Res, "Plein Error" digital photography work leads a small movement exploring the texture of pixels themselves as a commentary on the subject matter of the digital images they create.

If you head to Gallery Row, don’t expect the polished streets of Chelsea or the valet parking comforts of LA’s Westside. Do expect to walk among the streets Kerouac wrote about in On the Road and to actually be able to speak with the artist at an opening.

And with plenty of mid to upper six figure lofts coming online within the next year, that trust fund might just come in handy for rubbing elbows with the next big thing in LA's top emerging art scene. 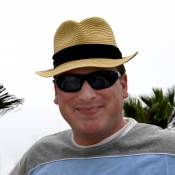 Benjamin Pezzillo is a photographer and occasional magazine writer living in Los Angeles.