The recent exhibition of paintings and journals by Robert C. Morgan at Rooster Gallery titled Dialogical Encounters  – a term borrowed from Martin Buber, the humanist philosopher –closed with a talk by the artist that reinforced the themes of the exhibit and opened spaces for further encounters.  The gallery is now an empty space again, no art hangs on the walls, but Dialogical Encounters left few empty spaces; the ideas and feelings that arise out of our encounters with art live on in continual transformation, just as Morgan’s thoughts and ideas linger, long after the words are spoken. Dialogical cycles are generative.

The circle is a dominant theme of the exhibition. That an avowedly abstract geometric painter should celebrate the circle is hardly surprising, especially when it comes to one so deeply immersed in Asian art and philosophy. The circle, a central symbol of the Tao, instigates and undergoes continual transformations in Morgan’s artistic and critical activity.

The painterly concerns of form, composition, balance, color, and variation are evident in the early paintings in the exhibit.  The earliest painting (from 1970) features a horizontal metallic line on black field. About a year later, this time in a set of three paintings (from 1971), Morgan extends the use of line and form into an exploration of rectangular forms; the circle is yet to come. Morgan had drawn circular gestures prior to these early paintings--studying calligraphy in Cambridge, Massachusetts—but only began working explicitly with circles as an artist in his early performance works (1972 – 1976).  While the circle was an important theme in his performances, Dialogical Encounters presents Morgan’s first series of paintings in which the circle is explored as a central theme. These paintings, made with metallic paints on burnt umber and ultramarine surfaces creating a silent, soft blackness, all titled Lissajous (2014-15) take center stage in the exhibit.

Morgan’s command of color through the use of metallic paint, and the subtle dance of the circular geometry of forms that he achieves, are the product of a graceful painterly dialogue that establishes a continuity between the early to the recent works. For Morgan painting is a way of discovering new ideas. He experiments with complex variations, each arrangement producing new insights during the act of painting, and each painting informing the next. The movement emerges as he mixes the metallic paint into alchemical transformations.

The Lissajous paintings let the circles loose, inciting geometric interactions within and across the canvases. And the paintings, in turn, are set in an open dialogue with Morgan’s journals. The journals are open to random entries and displayed in wooden cabinets topped with glass, setting up multiple levels of encounter beyond those already at work among the paintings: form-to-form, figure-to-ground, text-to-painting, sketch-to-text, idea-to-surface, etc. The journals are as much catalysts as they are a testament to Morgan’s lifelong commitment to thinking, writing, and speaking about art (as scholar, critic, artist, and educator), activities that continually inform his artistic creativity. Morgan sees no conflict in doing them all at the same time, and it is difficult to see how an artist with a trajectory like Morgan’s could separate them even if he wished to do so.

In terms of getting a sense of the contents of the journals, it bears mentions that the first case depicts plans for a performance designed around a “Circle of Tension and Balance.” In the second case one sees annotated sketches of Lissajous figures (visual representations of the frequency of waves written in light by an apparatus devised by Jules François Lissajous, and the source of inspiration for much of the work in the exhibition.) In a third case, on can read Morgan’s reflections on Ang Lee’s “The Ice Storm.” There is no direct relationship between the paintings and the entries. The journals and the entries were picked at random from among the 80 journals of drawings, thoughts, and confessions that Morgan has inscribed since 1967. The journals serve to further the goal of Dialogical Encounters: “Although I have taken liberties with Buber’s interpretation, I borrowed the phrase to express two moments where a conjugation appears inevitable.”

Morgan’s impressive oeuvre is partly the result of the way in which he allows his encounters with art inform his art. In I and Thou, Buber comments: “Going forward is unteachable in the sense of prescriptions. It can only be indicated—by drawing a circle that excludes everything else. The one thing needful becomes visible: the total acceptance of the present.” As a painter, Morgan’s acceptance of the present is anything but passive. Rather, it has always entailed actively resisting the pull of artistic trends and emerging orthodoxies: “I had to fight my way out of Conceptual Art … an idea is an idea, but the painting is the thing.”

Rather than drawing a circle that excluded everything else, Morgan chose to take a great leap: “My early performances were a way to explore the circle outside the frame.” And so he did, into performance art. The encounter with the circle was embodied in his drawings in sand, traced rhythmically by moving his body in various circular movements. Only then, after being liberated from the frame did the circles eventually find themselves regained in the Lissajous paintings in a continuity of manifold dialogical encounters.

Towards the end of Morgan’s talk on the concluding day of the exhibition, he showed a video based on excerpts from one of his recent performance, titled Purgation of Nike (2009).  This offered a glimpse of Morgan’s development from his early painting to various conceptual performances, from his artist books and “swim paintings” to his return in 2010 to geometric painting. Through the video, we were reminded that Morgan’s creativity has found various forms of expression in various media. The series of recent paintings shown in Dialogical Encounters investigate metallic circles as the reflection of light against a dark surface that absorbs light, a paradox he discovered in reading the Tao Te Ching in his formative years as an artist.

The exhibition and the talk, taken together, served as a sort of guide to the inner-workings of an artist, an invitation to discover art through the artist’s mind. As he put it:  “Art is something that provokes, that generates ideas, and hopefully takes you to another level of feeling where you begin to open up and realize yourself as another inhabitant of the world.” For Morgan, art and life unfold in perpetual encounters.WM 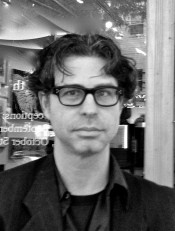