Cultural Rebels: The Art of Defiance: David Henry Nobody Jr.

I met with David Henry Nobody Jr. at our neighborhood coffee shop in Greenpoint, a fellow artist introduced us. I had just curated a very transgressive feminist performance event at a Lutheran Church and was looking for more unique and daring performance works. In 2017, I presented his public performance titled ‘Self-Portrait as a Buffet Table’ that resembled an insane food orgie with body parts, edible displays, and ending in a whipped cream fest to the SPRING/BREAK Art Show in Times Square. His photography works were also exhibited in my curatorial concept show. A true performance-aholic, David has gained a huge following on his Instagram handle and is now presenting his photographic works at gallery Unit London.

COCO DOLLE: Political satire and rageous derision of American celebrity culture has been a strong suit in your career. Twenty years ago, you created fake campaign posters ‘Trump for President’ and publicly campaigned on his behalf - such premonitory work! - . Recently, your instagram page featured one of your infamous ‘resemblage’ compositions in motion addressing the fall of Senator Mitch McConnell, following the inauguration of our new President Joe Biden. Where does your impulse for these complex audacious transgressive social experimental stunts and compositions stem from?

DAVID HENRY NOBODY JR.: Political propaganda is the main ideology that informs how we as a society think, feel and behave, and is certainly one of many levels of discourse that is of recurring personal and artistic interest. My work is behavioral art and I am an Immersionist performance artist and social sculptor. I think humor represents the highest form of our creativity, often by pointing out the hypocrisy of human nature (especially my own) It is important to laugh, to see things abstractly, especially at supposed authority figures!

My motivation is always to take the propaganda apart by literally wearing it myself on my body and living it as real life. There is conceptual sarcasm in my actions and there is not. I became obsessed with Trump and stalked him for a year undercover in 1999 posing as a douchebag looking run-of-the-mill white guy conservative. I met him six times and there are five 8”x10” photographic prints of us together, each signed by Trump in a gold paint marker. Later that year, in a prescient social experiment, i made ‘Trump For President 2000’ posters and took them to the public in a series of street videos shot by the legendary photographer and documentarian Richard Sandler. The Trump piece was me looking at a fascist American patriarchy by becoming a personally complicit sycophant. Although done tongue and cheek at the time, I see it now, as a dark warning for the future, that went unheeded.

The ‘Move Mitch Get Out The Way Hoe’ Resemblagé - a term I coined which is the combination of the words resemble and collage - , is the work of an entirely different performance character, David Nobody, my online alter-ego on Instagram. I wanted to wear the subject again - of a currently historically crazy time! -  and react to the wearing of it while being recorded on camera. As i created the piece it occurred to me that i should have blood on my hands at the end of the video, just as McConnell actually does. I have always loved the rapper Ludacris and was all too happy to weave a pattern of his lyrical ‘Bitch’ and juxtapose it with the political ‘Mitch’. The video is catchy and went a bit viral. It got a lot of comments, the written reactions online are an extension of the performance’s confrontation. “Put the audience in action, they just want to take a bow” -Antonin Artaud.

CD: You presently are showing in a viewing room at gallery UNIT LONDON with a new series of photographic works, along with images of your studio and videos of your process. Thus giving us the feeling of viewing both an exhibition and an installation. Can you tell us about it?

DHNJ: I have created a new series of five large-print Resemblagé Pieces. I had only about five weeks to produce the show and it's my first time doing an online exhibition. The studio process was very intense, because of the virus I chose to go back to self portraits. (I had made some multifigure pieces earlier in 2020 such as Adam And Eve Covered In Razor Blades). Pretzel Logic was the first piece and my only use of food in the show. It seemed pretty tone def to be using food at this time so I pivoted after this piece and I pushed into new territory.

But the examination of a twisted “pretzel logic” left a lasting impression, a conceptual shadow. I searched for deeper patterns. A skewed rhyme and reason and cause and effect became next the Resemblagé, Trophy Boy which is a surreal look at cookie-cutter male perfection. I bought the trophies off a random guy on craigslist- he did not want to talk about where they came from and got weird when i asked. In my mind I wanted to win so much that I would transform into some kind of freaky trophy encrusted hoarder.

Mudslide Into Nobody stems from my interest in miniatures and dioramas. A friend likened it to a Chris Burden sculpture, Medusa’s Head. Dollhouses and their furniture always seem psychologically loaded to me. (I saw the movie hereditary in the spring also) The furniture references miniature furniture that I made for my sister's dollhouse as a kid. It is also a nod to a 1995 performance of mine called Man and Mice. To me Mudlside is about humanity being swallowed by the earth, our mortality is being slowly crushed by the tectonic plates of time.

As the work progressed, I video recorded the behind the scenes action with assistance from Mariah Burke, my girlfriend, and Anna Yaxtskevich, my photographer. The culmination of photography, video and performance fractured into the pink black and purple tone of Barbie’s Bane. This resemblagé is the most kinetic with multiple motorized and thrashing barbie dolls affixed to my body. The piece is based on my surreal nightmares. It is also influenced by the book Crash by JG Ballard.

The use of the behind the scenes video, studio installation images and screen shots of the public’s Instagram comments are meant to bring the viewer deeper inside my creative process. I wanted all this documentation to support the set of five images- making the work stand out from just being photography and showing its true performative nature and context.

CD: Obviously influenced by previous generations of performance artists, you have developed, like the artist Cindy Sherman, the practice of self-portraiture and a fascination for disguise. Aside from your performance happenings, you have created in the last decade a large body of work in photography. Though unlike Cindy Sherman, your work doesn’t purely fall in the photography type and market category. As not many commercial galleries are taking the challenge of ‘selling’ performance artists, do you think it is time for your type of work to benefit from a bespoke market framework?

DHNJ: I am influenced by a whole lot of art and art movements and I have a very very diverse 30 year repertoire, far broader and more experimental and contradictory than Cindy Sherman’s - no disrespect intended! But her work has a huge influence on my ‘Resemblagè’ photography and the general approach of inserting the self physically into a work of art- the author infiltrating the art work. I have taken the spirit of hacking the self into objects and experiential live situations and run with it, in order to expand and question the genre, In order to bring it closer to life itself at times.

The idea  that we are chameleon-like multifaceted beings defined by social context is distilled from the work of Cindy Sherman. This has given me a broad aesthetic license in my life’s work! My retrospective someday is going to look like a 100 car pile up on the highway! it will absolutely be more diverse in styles than Picabia, but probably more in the range of style and approach-diversity of Mike Kelly. I believe that this is my brand- the brand of no brand- an aesthetic shapeshifter.

Luckily, I am able to carry on making art though my art- although this is because Instagram has allowed me to have a much bigger audience than the art world ever did. My work and my business approach evolve with the technology. My work involves building bridges between different worlds as opposed to the insularity of painting. My videos carry equal market presence with my prints and live performances.

But you are right, performance artists are not big in the galleries these days- fortunately the world is changing and my work keeps growing and benefitting as we throw off the shackles of outmoded ways- I am glad that you, Coco Dolle have shown my work along with Andrew Edlin Gallery. I am thankful that Unit London took my work on. Hopefully more galleries will catch up! it would be welcomed! WM 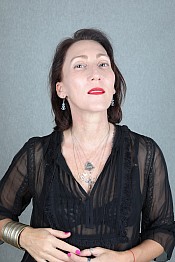 Coco Dolle is a French-American artist and curator based in New York since 1997. Over the past decade, she has curated the works of numerous feminists and ‘cultural rebels’. Coco is the founder of Milk and Night Agency and of the Legacy Fatale performance art troupe. Her personal works feature in numerous private collections and have been exhibited and performed internationally. Photo by Elaine Rita.