John Currin: You either love him or you hate him. Well, maybe that isn’t entirely true, but it often seems that way from reading criticism of him or hearing people speak off the cuff about his work. An artist who really got people interested in figurative painting again in the 1990's, some have regarded his portrayal of women as sexist. Obviously Currin enjoys confronting the viewer, but come on folks, have a sense of humor! If art was always supposed to play nice and not make you uncomfortable, we might as well be looking at “happy little trees.” OK, not everything he has ever done is a masterpiece (as if that were possible), but this exhibition at Gagosian shows why he is one of the best painter’s working today.

The medium-sized, slightly old-fashioned gallery at Gagosian’s uptown space is a perfect venue for Currin’s canvasses, which hint at the Old Masters while knowing when to stop. Many of the paintings in his 2006 show in the same venue depicted scenes of hardcore porn, and while this grouping is still randy, it is not nearly as over the top. Still, the largest work on view, The Women of Franklin Street (2009), features one woman sucking the nipples of another while placing her hand on her muff. But oh, the fine china in the foreground is rendered with such care, as is the drapery and hanging glass bauble. And check out the tiled floor and marble tabletop. Currin loves to paint and pushes himself to find challenging textures and surfaces to give form to. Case in point is Mademoiselle, (2009), a rather conservative painting of a woman in a translucent nightdress with a fur collar wearing a pearl bracelet that again makes the case for Currin’s considerable skill.

Granted, Dogwood Thieves (2010) with its ornate gold frame and subject matter of two women in a loving gaze with one holding a straw hat over her naked chest is downright kitschy, but overall many of the works in this show are masterful explorations of painterly technique and the subject matter is somewhat secondary. To further argue in favor of his oeuvre, if Currin were to take out the awkward and vulgar aspects in his work, they would become academic and thus boring as hell. The problem with a lot of painting with “serious” content, whether it tackles political or social issues, is the way it is rendered; either clumsily or stuck in a stylistic dead end. Over the years Currin has explored various styles, from relatively loose with quick brushstrokes, to carefully layered with considerable underpainting.

Hotpants (2010) the only work in the show to feature male figures, depicts a middle-aged tailor measuring a rather dowdy gentleman’s jacket for alterations. That the tailor himself is in his underwear adds an element of homoeroticism to the humorous scene, while a much handsomer version of the client shown in a reflection in the full-length mirror is another example of Currin showing off his painting chops. The lone zaftig beauty in Big Hands (2010), doesn’t rely at all on such comic relief, but trumpets the artist’s talents just as well. 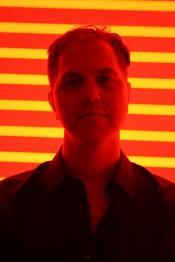 Chris Bors is a New York-based artist and writer who received his MFA from School of Visual Arts. He has had solo exhibitions at Envoy Gallery in New York and Go North in Beacon, New York. His art has also been exhibited at MoMA PS1, White Columns, and Sixtyseven in New York, Casino Luxembourg in Luxembourg, Bahnwärterhaus in Esslingen, Germany, and Bongout in Berlin. He has written for Artforum.com, ArtReview, Art in America, Artnet.com, Modern Painters, Artinfo.com, Metropolis M, and Artillery and is the former Managing and Photo Editor for Artinfo.com and Museums. His guilty pleasures include thrash metal, hardcore punk, and professional wrestling. www.chrisbors.com