Cosmic Connections: The Art of Mikael B

What does the artist do? He draws connections. He ties the invisible threads between things. He dives into history, be it the history of mankind, the geological history of the Earth or the beginning and end of the manifest cosmos.

Danish-born artist Mikael B paints dynamic images of crystalline geometric clusters rushing through lush, painterly skyscapes. Pointed, spear-like arrays hover over elegant clouds and AbEx horizons. His cosmic creations straddle multiple oppositions: artificial versus organic, structural versus biomorphic, abstract versus representational. Another allusion is constraint versus freedom, with the geometric forms appearing controlled and deliberate and the background zones more fluid and spontaneous. Since masculinity has been historically linked with angles and femininity with curves, the male/female opposition is also evoked. (And with it, an oblique reference to sexuality.)

Mikael B began his professional career as a graphic designer, founding his own design firm at the age of 22. But after years of creating images for clients, he began to realize he wanted to focus on his own work. He started as a street artist, doing "wildstyle" graffiti, a complex calligraphy that folds letters into dense, overlapping curves and streaks. (There are several of the artist's "wildstyle" drawings in the exhibit at Gregorio Escalante Gallery, all equally sophisticated.) He then segued into murals, allowing the "wildstyle" letters to morph into crisp, angular abstractions. Then he juxtaposed the geometry with areas of serene earthly skies and fiery stellar explosions.

The works are powerful and evocative. Their materiality is insistent: the artist allows paint to drip and splatter, adding large brushstrokes in spontaneous flourishes. At times, the strokes recall the adamant compositions of artists like Abstract Expressionist master Robert Motherwell. At other times, viewers might think of Enso, the sacred circles of Japanese brush painting created by one or two impromptu strokes. Because Enso circles refer to enlightenment, the universe, and the void, the Zen-like strokes add a symbolic layer to Mikael B's cosmic depictions. 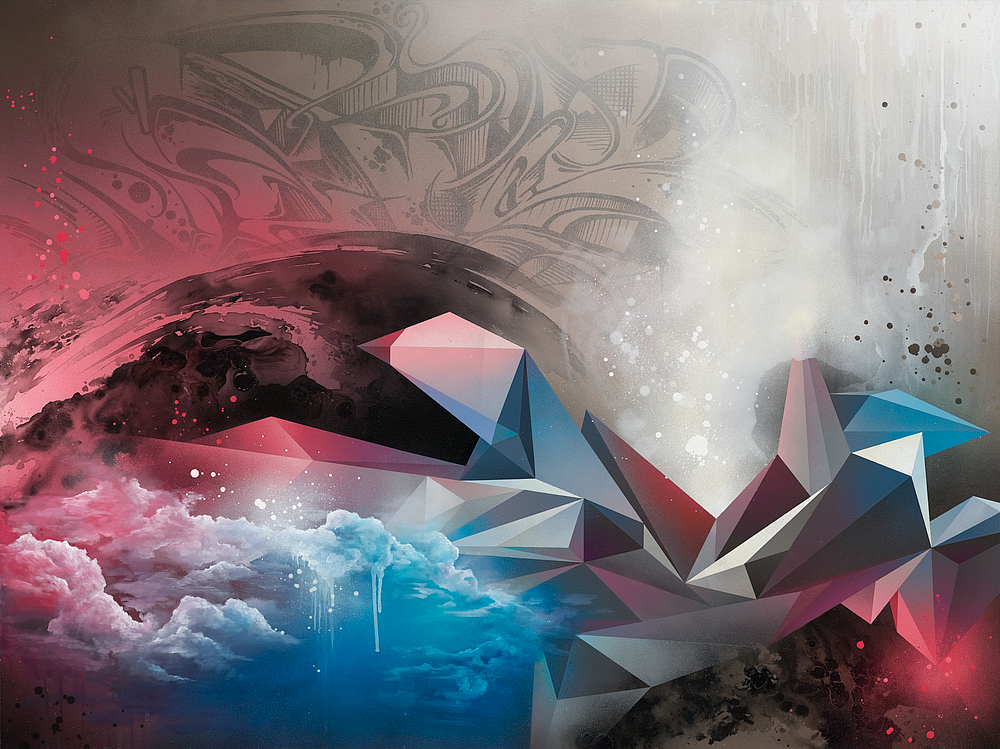 Since the tight, geometric shapes appear to be exploding into a comparatively open territory, some viewers might also think of the "Big Bang" when they see the work. (According to the Big Bang theory, the universe expanded from a high-density space.) The creation of the universe is echoed in the productive fertility of male/female sexuality, and Mikael B's work is definitely sexy, however indirectly or metaphorically.

The artist has written, "I want to create a personal space, an infinite universe, a haven where thoughts can wander and the gaze can be bewildered, concerns and negative thoughts can disappear…so we can just be." Viewers are invited to enter Mikael B's personal space to see and be delighted by the painterly world he has created. As vital and dynamic as his compositions are, they also appeal to meditative quietude.

This July, Mikael B painted a large mural on the northeast wall of Chung King Alley in Chinatown. He has also received a commission to execute a mural on the exterior walls of Art Share LA. Viewers will be able to enjoy his work long after the closing of his current exhibition--his first one-man show in the United States--at Gregorio Escalante Gallery. WM