City Limit at The Journal gallery

"City Limit," showing at the Journal gallery through May 3rd, marks the curatorial debut of Brooklyn-based artist Colin Snapp. Rooted in Snapp's own practice, the photographs gathered in the exhibition occupy a crepuscular realm between documentary realism and imaginative transformation. The raw material that serves as the substrate for this dialectic is nothing less than space itself: space reified as a commodity, in terms of which people are directed to behave in certain ways. Essential to the show, however, is the manifestation of space as something that transcends ritualistic codes of conduct. Capturing outlying regions of daily experience, such as suburban shopping malls of the 80's (photographed by Michael Galinsky), space becomes eloquent as an environing potential shaped by history but not limited to its laws. This mingling of inevitability and freedom echoes themes in Snapp's own art, so I inquired into the formal structure of "City Limit," and how it relates to the sense of mediation that pervades the show.

Jeff Grunthaner: As an artist with a highly developed film and photographic background, I'm wondering how the works gathered in City Limit reflect your own work, or if they do at all?

Colin Snapp: The works I chose for "City Limit" do reflect my own practice. The degree in which they do this, however, varies from piece to piece. The most obvious connection between my own work and that of the artists in the show is the value placed on the exploratory. Many of the artists in the show, for instance, keep a studio, yet I wouldn't consider them studio artists. For the most part, these artists are utilizing travel and exploration as a way to engage ideas on a more spontaneous level -- a level that's not as easy to control or manipulate as, say, an artist with a more studio-based practice. This certain spontaneity -- and the back and forth/contrast between outside space and inside -- is at the core of the exhibition.

JG: What criteria guided your selection of works for the show?

CS: Selecting the works for the show ended up being a very natural process for me. At first the criteria were quite open ended: I just made a list of works that I was drawn to, works that somehow stuck with me throughout the years. Once I had this list, I started using the commonalities between the works to put together a thematic thread. I started thinking about why I was drawn to these images, what it was about them that made them so memorable.

I realized the two main attractions for me were the story or idea behind the image, and the aesthetic or temperament the image exuded. The exact criteria aren't easy to describe. This being said, apart from a couple of logistical complications due to time constraints, the show ended up being very calculated. If I ever curate in the future, however, I'll include sculptural and performative elements.

JG: The bulk of the works in "City Limit" are highly analogue, in that they're by and large (with the exception of one or two pieces) the products of film being exposed to light. Why did you choose to show filmic work, over more digitally altered pieces?


CS: I have no strong allegiance to film, video or photography -- or even the particular histories of these mediums. These technologies are mere tools that allow for a certain flexibility that would be unattainable with another medium. I felt it was important to choose works that convey this notion, as I believe its a common ideology shared by the artists in the exhibition.

In a general sense, I'm attracted to a more raw or degraded image quality. But for the exhibition I really didn't give any thought to digital vs. analogue; and at this point in time the debate between the two seems antiquated. I like playing with the slippage of old and new technologies. Its something I address a lot in my own practice. I love how certain works in the show that look the most filmic are in fact digital.

JG: What's the significance behind the title of the show?

CS: In the broadest sense the show is about civic and pastoral divisions, or the divisions between the woods and the suburbs. The peripheries or the outliers/suburban scapes of a city are also central to the show. The limitations of a city both geographically and psychology are key factors in many of the works. I like using the metaphor of taking an Amtrak train out of an urban center into the wilderness. The gradient of humanity this experience evokes has always captivated me. The title "City Limit" made sense as it speaks of these themes but is still open for a certain amount of interpretation.

JG: Some photos, like Robert Smithson's, capture a place wholly removed from urban or suburban transit. How does the theme of land art tie in with the exhibition as a whole?

CS: In one facet or another, every work in the show is linked to the idea of a divided landscape. I felt it was important to include some images that document various seminal land art works or sculptural interventions within a specific environment. The inclusion of artists such as Robert Smithson or Dennis Oppenheim was crucial. The approach these artists had to the environment was revolutionary. What they're known for historically added new meaning to the rest of the works in the show and vice versa. The conversation about the value of a photograph/documentation of sculpture versus sculpture itself was deeply in play here. This is a subtle notion within the larger context of the show, but ultimately intrinsic to the success of how the works converse with each other.

JG: Does a camera merely reflect, or does it alter what it captures?

CS: A camera is capable of doing both these things, but so is the human eye. WM


The closing of "City Limit" curated by Colin Snapp 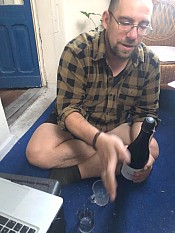