MIAMI, FLA: Winding my way down to The Gallery at South Pointe via Ocean Drive in Miami's South Beach is like a circle in hell, or rather, like playing Grand Theft Auto without a 'stop' button at your fingertips. By the time I get to the gallery to meet artist Esperanza Cortés I've had several near collisions: with a speeding cop, a guy on bike wearing nothing but a red g-string and a boa constrictor, and at the rainbow flag painted pedestrian crossing, a close call with a road-rager in a one hour rental yellow Lamborghini. Not to forget being cut off by Tank Girl driving a golf cart shaped like a coconut blaring hiphop.

Peering in through the gallery window I see several hundred eyes staring back at me. Cortés OJO II, 2017 – 500 eye portraits looking me in the eye: brown eyes, kind eyes, green eyes, evil eyes, blue eyes, sad eyes, blood shot eyes, even yellow eyes. Some with pin point pupils, others dilated. Shifting focus, I am greeted by Cortés as she floats toward me in a cloud of frills. Colombian-born and New York raised, the artist is in town for Art Basel Miami Beach, and has several side shows on the go along with the DVCAI stable of thirteen artists at The Gallery at South Pointe (curated by Rosie Gordon-Wallace) December 1st through February 18, 2018.

Effortlessly Esperanza and I got talking about women getting written out of art history and other pleasingly heavy stuff. On the morning of the 911 attack, her memory of living in Tribeca at the time was witnessing thousands of people covered in white ash, walking with only eyes visible, their only identifying feature. It was also, according to the artist, the day her eyes changed color. We talk about our mutual affection for 'eye miniatures' and the collection of eye portraits on pins in the American Wing at New York's Metropolitan Museum. During the 18th and 19th centuries 'Eye miniatures' or 'Lovers' eyes were worn concealed and depicted the eye or eyes of loved ones. About how while 'Eye miniatures' may have been a European tradition, arguably modernism is not. As a light skinned Latina who sometimes gets overlooked for not 'looking the part' arguing for alternatives is something Cortes has done a lot of: 'Years ago when I worked as a Museum educator at MoMA, when asked to contribute to a brainstorm session at the museum about how to be more inclusive I made the mistake of saying what I really thought. I pointed out that urban kids visiting would not necessarily respond to the vision of singularly white male art. At the time, and to this day, there was very little attempt to represent a range of artwork other than the white male focus. I'm that kind of person, I can't be false. I say what I believe, even if hurts.' Authenticity, we both agree, is particularly lacking in the art world during the age of contacts vs content.

While Cortés has an impressive residency track record, and recently won the prestigious Joan Mitchell Award, she''s had her fair share of highs and lows, including two months of being home bound with her leg in a cast during New York's snow-apocalypse. Experiences, I believe which give the artist a welcome sense of empathy and intelligent intensity. Echoing a sentiment shared by my own artist mother, “Art making is an organized, disciplined pleasure”. Cortés is technically proficient and her work is multidisciplinary. Trained as a sculptor, she does it all on her own, no outsourcing. With a thoroughly contemporary take on fresco painting, an enviably edgy command of watercolor, and a minimalist eye for mixed media. Even her charm bracelet wall jewel manages to be both decorative, socially engaged and feminist.

“With so many Spanish speaking countries and varieties of Spanish speaking people it's high-time we make our impact culturally. For example, Colombian artist Olga de Amaral's works in fibre have informed so many but she is only now, in her 80s being acknowledged. Historically, Latinas have been lumped under a title that’s so vast. I come from a family that includes Sephardic jews, an opera singer father, a female matador (bull-fighter) and a former afro-latin dancer now visual artist, me: Esperanza Cortés.” WM 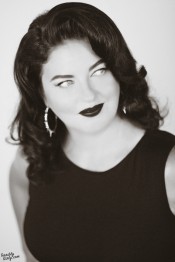