Painting as a physical medium and as a medium for the thinking and the dreaming is purposefully presented by the Danish-born, Barcelona-based Rasmus Nilausen in his American solo debut at Team Gallery, New York.

Like advancing waves and swirling currents, carrying ideas and pertinent processes, Nilausen's paintings are analogically-born and analogically-borne creations.  They appeal to the gazer, the picture window admirer, the night sky ponderer, and the examiner of intricate details. They are antidotes to the digitally-born, but they are by someone who is equipped with a modern mentality. Consequently, Nilausen is a highly sentient artist, producing works in the real world and connecting through his canvases with everyday people, converging the complex and rewarding nature of human and naturally-occurring phenomena with that which is profoundly mythical. Nilausen is the thinking person's poet-MMA (i.e., mixed media artist) in the full-contact sport of producing paintings and engaging with them.

Upon entering the Nilausen exhibition, a visitor encounters a compass-point-like layout of works of various sizes. To the “east,” “i is idiolect” offers the most complex approach to considering the last 125 years of painting. “Northwards,” “Tiziano Said,” pivots between the cinquecento and the present day.  Near the entrance and at the “south-southwestward” point of the show, “Signorina Buonasera” pulls at one's peripheral vision and keeps one in the gallery for repeated looks that alternate between the present and the infinite and eternal.  At other points, it is plausible that a viewer could play Modest Mussorgsky's “Pictures At an Exhibition” in their mind, but, because Nilausen's works are so inscrutably alluring, one would, instead, feel compelled to look outwardly, regard each work, and do so deeply.

Each painting by Nilausen is like a river of brushstrokes and visual/visceral statements.  In “Saliva,” the artist delineates in burgundy selected, fluidly-applied strokes of steel blue oil paint in what would have otherwise been a monochromatic tableau.  The demarcations resemble disembodied, speaking tongues.  What’s assertively manifested is a declarative reversal of what it means for an expressive work to be an “action painting.” It is, the artist reveals, the painting, itself, that is expressive.  It is the character of the physical presence of the results that announces itself to a viewer.  The idea that a gestural painting is a repository of the evidence of its creation is now put into question.

In “Reflex Edit,” Nilausen’s kindredness to Philip Guston’s early and late work and, in “Ghost Writer,” the manner in which the billowing clouds echo Robert Rauschenberg’s practice of overcoating images with white paint suggests an affinity for the kinds of investigations that artists pursued in the 1950’s and 1960’s.  However, Nilausen is past all of that and past the adventures of the neo-expressionists of the New York art scene of the 1980’s. For Nilausen, painting gesturally/representationally is the pursuit of a new breed. His investigation of the paintings of the past and the practices of the present arise from a deep personal connection with the medium and the exemplars that are resonant for him.

“i is idiolect” is the crescendo in this sea of compass points. Its points of departure are two paintings - one by Edvard Munch and the other by Rene Daniels. (The writer advises the reader look them up after seeing the Nilausen show. The reward is seeing “i is idiolect,” itself, in-person, and, then, maybe, discovering how it arises from the mists of art history later.)  The lower-case letter, i, stands in for itself and also as both a moon and moonbeam poised against the shore and as a moonstruck moment in a nocturne, featuring a tower of the now-gone World Trade Center.  Meanwhile, this tentpole activity is occurring within a churning ground of multiple bands of colors that connote the littoral and denote the brushstrokes of the work itself. The story and the stage are astonishingly intertwined here, and all within one composition.

“Within” is not an inconsiderable word to use while contemplating Nilausen's paintings, as it uncovers his proposition/demonstration of the aliveness of the human condition. The consciousness of the painter and the viewer of a work stands in sharp relief at this exhibition while regarding “Tiziano Said.”  A vaporization - not a deconstruction – of “Venus With a Mirror,” by Titian, this work appears to have been conjured up in response to an incantation, recited by a present-day member of the cogniscenti of the arts – namely, those of painting, literature, and tablet computing.  A mist of an application of Schnabel purple floats within an off-white -sometimes oat white – reverie of an interior, amidst a suggestion of a Venetian boudoir scene, the painting is an exposition on looking, creating, reflecting, dwelling, and simply being lost in something for which there are no words but can be described within a morphing of the continuum of poetry and prose.

Few painters today are doing what Nilausen does. Arguably, Peter Doig stands as a master of this moment. And, perhaps, as it was in the epoch of the Italian Renaissance, a new, younger master comes along to a city state to create a harmony on the stage of the New York art gallery scene. Viewers here can see works by both artists. A painting by Doig has recently entered the collection of the Metropolitan Museum of Art,  and it will eventually be shown. Nilausen's show, however, is on view right now at Team Gallery. Go to 83 Grand Street and see it while you can. 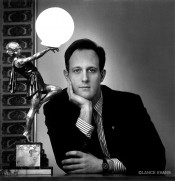 Barry N. Neuman was previously the New York editor of the online edition and an associate editor of the hard copy edition of “Boiler,” Milan. Works of his published in “Boiler” include interviews with Matthew Antezzo, Carles Congost, Christian Flamm, Graham Little, Victor Rodriguez, Francis Ruyter, and Gordon Terry. He has additionally guest-curated group exhibitions at Team Gallery, New York, and La Panadería, Mexico City. Mr. Neuman received a M. A. in visual arts administration from New York University and a B. A. in biological sciences from the State University Of New York At Binghamton.