Dark Humor in the Lightest Pastels: Genesis Belanger’s “Through the Eye of a Needle” at The Aldrich Contemporary Art Museum

In her first major solo museum exhibition, Through the Eye of a Needle at The Aldrich Contemporary Art Museum, Genesis Belanger expands her iconic, domestic porcelain and stoneware objects that disavow glazes and anthropomorphize desires. Although these matte sculptures do not look natural, her confectionary palette makes them feel familiar, evoking the  flatness of saturated images across social media. In 2019, Belanger had acclaimed solo shows at the New Museum in New York and François Ghebaly gallery in Los Angeles. What distinguishes this winsome presentation, curated by Amy Smith-Stewart, from previous samplings of Belanger’s work is its solemnity. She presents bereavement rituals in large tableaus that include floral arrangements and standing pianos. The grey timbre that looms over the exhibition—from wall paint to fabric upholstery—undercuts her work’s typical ebullience but ultimately makes the pinks pop. While Belanger’s sculptures mime our anxieties, they also provide a strange sense of comfort.

The exhibition unfolds in episodes, the first of which marks the aftermath of a celebration. Two potted plants — titled Naturally Groomed (2020) and Well Tended (2020)— flank a couch, onto which a spilled purse lets loose its contents, including nail polish and a half-eaten sandwich. The metalwork of the plants’ stems spotlights their ceramic leaves. Flaccid balloons, rendered weightless, signal we missed the main event. One wonders if the balloons’ ribbons are real or artificial—Belanger is sparring in her deft use of clay so that her materials are decisive and not perfunctory.


The second episode, No More News (2020), presents an elongated hand with vibrant red nails around the end of a telephone, ignoring the other end of the line. The objects rest on a massive grey table, which feels manufactured as opposed to rendered.  Here the dressings do her a disservice, as the large surface of the table subsumes its accoutrements, casting the objects atop as props and not actors. The grey mood feels imposed onto a sentiment already achieved; her work is better served on pedestals of the artist’s own invention, not replication, such as the cigarette legs of Dog in Heels and Siting Habit (2017).

What’s notable about the corporeal nature of Belanger’s work in these scenes is that the fragmented body parts serve as a surrogate for ourselves. In With Dignity (2020), a foot anticipates droplets from a nearby spigot, whose cropping invokes the arrangements of Robert Gober. With muscles in motion, a larger body is implied — characters are revealed not through naturalism but through emotional inflection.

Discussion of Belanger’s artworks almost always situates them within the context of surrealism and pop art. Her singular voice makes these connections hard to ignore, without making her work feel redundant. Belanger’s disquieting, recognizably strange scenarios revel in the uncanny. Her fetishistic objects operate through psychological subtlety, in dialogue with legends like Meret Oppenheim and peers like Hannah Levy. In You Never Know What You're Gonna Get (2020), a ribboned box of body parts replace chocolates, evoking Rene Magritte’s symbolic, compartmentalized imagery and Gina Beavers’ fragmented feminine body parts of our image-obsessed culture. Belanger’s sculptures recall Claes Oldenberg’s soft sculptures of everyday objects and Tom Wesselman’s seductive depictions of women, but instead of objectifying the fractured human, her work embodies it.

Beyond a sculptor, a ceramicist, or a stylist — Belanger is foremost an illustrator in the third dimension. She imbues her mordant works with a mood that is animated, polished, and uniquely her own. The final room of the exhibition presents her largest tableau to date, dominated by a Manifest Destiny (2020), a back wall covered in grey curtains, with two hands that emerge and hold the drapes in place. The room presents scenes of bounty, as strange cornucopias offer succulent feelings of phantom company and consolation. A Fortress of Order and Generosity (2020) serves a feast of plated foods, anthropomorphized vegetables and savory extremities. She stages this large room like a 21st century vanitas painting of a funerary pop-up shop. On tables pink and blue pills appear to signal anxiety indicative of the mid-20th century’s pharmaceutical industry rise. Belanger’s “self-possessed feminism” that explores domestic desires and anxieties finds an apposite voice in suburban Ridgefield, CT.

While in smaller episodes Belanger’s fragmented bodies appear as surrogates, this mise-en-scene permits viewers to walk through her objects as a set. The sculptures function differently, as they become a metonymic cast of characters that emphasizes the viewer’s inhabitants of this strange world, acutely aware of their own anxieties. In this larger installation, her objects breed and invoke our own anxieties with greater affect and efficacy than in smaller vignettes.

The exhibition takes its title from a New Testament proverb: “It is easier for a camel to pass through the eye of a needle than for a rich man to get into heaven.” While conceived before the persisting pandemic, the exhibition is still symptomatic of our glib outlook amidst the second Gilded Age. This funerary atmosphere sings best within the arrangement of iconography and visual puns—not the grey atmosphere overlain in post-production. The exhibition is melancholic but not nostalgic. Belanger’s final installation fashions us as characters who navigate the space in a museum once thought unattainable in the height of quarantine, while still signaling many of the domestic anxieties engendered there. These household objects take on new meaning now that we’ve finally left the house, suggesting the futility of the ways we pacify our finality with consumer products. Genesis Belanger casts dark humor in the lightest pastels; all of these remedies meant to assuage our anxieties can in fact amplify them. WM 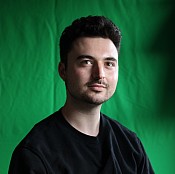 Jack Radley is a Brooklyn-based writer and curator. His writings have been published in Artsy, Berlin Art Link, Boston Art Review, Cultured, Hyperallergic, Sixty Inches from Center, and Temporary Art Review, among other publications.