Zhivago Duncan has built a massive operator controlled painting machine that works with a series of spray cans. The resulting paintings come from a place that is free of the constraints of traditional painterly technique, yet not free of challenges. Duncan's piece is another tool to make paintings but has a series of interesting overtones which arise when one thinks about the concept of mechanization in art. Walter Benjamin's essay Art in the Age of Mechanical Reproduction and Warhol's factory approach to painting are obvious references from the past, but Wim Delvoye's Cloaca machine and Damien Hirst's spin paintings are contemporary references cited by Duncan in our recent discussions. Duncan's new work also brings forth associations to research into virtual intelligence.

The most successful non-human paintings thus far have been the work of cats and elephants. In terms of virtual painting an android artist would paint without feelings or rather paint within the constraints of a pre-programmed set of values prescribed by the robot's master. Humans continue to be fascinated with this idea of robots or non-humans gaining cognitive skills. The mysteries of the world and the often destructive human tendency to explore the unknown holds cataclysmic potential. We are obsessed with the idea that a computer could feel real emotion and in some way replace humans as primary inhabitants of earth. IBM's Deep Blue was a chess computer pitted against chess world champion Gary Kasparov. Subsequently Kasparov accused IMB of cheating and eventually IBM shut down Deep Blue and denied Kasparov a rematch. The Deep Blue saga shows us that the human equation seems to always reintegrate itself with even the most ambitious experiments.

Painting works off the human nervous system in a way that would make a simulated painterly experience difficult if not impossible to replicate. It is within this area of research that Zhivago Duncan has been developing his new work. Humanity's obsession with virtual intelligence extends to areas such as virtual creativity but Duncan is not concerned with this kind of advanced logic within his machine, nor is his project an overtly conceptual piece.

Noah Becker: I first became aware of you as a Berlin based artist?

Becker: But currently you have just presented a new project in Miami with Snitzer gallery?

Duncan: Yes but I don't live in Miami.

Duncan: I'd been invited to Miami by collectors of mine.

Becker: What was the project you that proposed for Miami?

Duncan: I didn't really propose anything but Fred Snitzer gave me a studio and offered me a show. I'd been thinking about this kind of simple Dadaist painting machine and how I would install this in Miami.

Becker: So this is a very different thing than the earlier paintings I saw of yours and wrote about for Art in America magazine?

Duncan: Yeah this is very different from that.

Becker: Were you showing any of the figurative works?

Duncan: I showed next door, I showed some of the figurative works but this machine is making very abstract works.

Becker: So the finished works are rather abstract.

Duncan: Yes and the machine itself is not for sale, the machine is the focus of the installation. I have about twenty works I've produced with it. The more I work on the paintings made by the machine the more complex they become. There are certain rules that the machine follows. I decide how to rotate it and how it works.

Duncan: With this machine it's the complete loss of control. It's actually quite dangerous, it could fall or break or even kill someone if not operated with complete attention. I have so far about twenty works that I've produced with it. The more I work on them the more complex they become. There are three main directions that it can go due to it being a trolley on tracks. It has a winch system that pulls it up and down the tracks at a certain angle. Eight spray cans, four are right side up and four are upside down, are mounted on on a rotating wheel. So in this way the rotation and up an down motion give me certain options for painting. A canvas can be aligned in places around the tracks for different reasons.

Becker: How long does a performance last?

Duncan: It depends, the last performance was about 30 minutes in length.

Becker: And How many paintings does the machine produce in 30 minutes?

Duncan: The main goal is to kind of push and step outside the borders of painting. It could produce one painting for the rest of it's life - or many. As a painter yourself, you understand this situation where we try to give ourself obstacles within our technique to lose our hand, It's more about that. This machine is kinetic sculpture which is performed. It can't operate without me so it's really a machine that performs.

Becker: Do you show the paintings separately?

Duncan: Yes, many of the paintings have turned out beautifully. I still need to think about where I want to go with the machine and how. I will operate the machine for the duration of the exhibition and see where it goes from there.

MASCHINE from Zhivago Duncan on Vimeo. 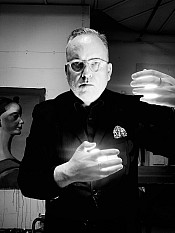 Noah Becker shows his paintings internationally. A visual artist, saxophonist and the publisher and founding editor of Whitehot Magazine, Becker has also written freelance articles for many other major magazines. Becker's writing has appeared in The Guardian, VICE, Garage, Art in America, Interview Magazine, Canadian Art and the Huffington Post. He has also written texts for major artist monographs published by Rizzoli and Hatje Cantz. Becker directed the New York art documentary New York is Now (2010) viewable on Youtube.